We are living in the epoch of eternal change. But, whatsoever, we wouldn`t predict a sharp metamorphosis in the design of the dwellings for upcoming 2016 year. It will more likely become a part of the bigger process of so called “silent” revolution. It is when we can`t admit rapid change of forms, creating a new more technological materials. It is now a time about probably improvement of existing than inventing new. But nevertheless, we can look at unusual trendy living room interior design ideas to admit  a drastical change of design, color solutions and used materials comparing to the interiors a decade before.

And the living room is the most easy place to trace the evolution. Ceiling trim, window drapery and shutters, carpet and couch zone allocation, accent wall decorating techniques and even a video area arrangement – everything is in perpetual barely perceptible alteration.

We will explore the most trendy actual examples of the living room furnishing and trimming to predict the possible trends of the upcoming season. We have a very versatile collection of big and small rooms, located in private houses, condos and other apartments, using a very expensive finishing materials and budget solutions.

The white is always in trend. Especially in the locations with hot climate to give the homeowners the feeling of freshness and cleanliness. White finishing of the interior implies an abunbance of natural light through the big number of window panels. This living room also has a good illumination of artificial lighting. The matrix of LED fixtures is built-in to the plasterboard suspended ceiling. We can also admit the round resting zone constituted with the upholstered chairs only. Transition to the round form of table in the center of this composition is the modern trend of last couple of years. The electric fireplace and the TV-set at the “inverted” accent wall. 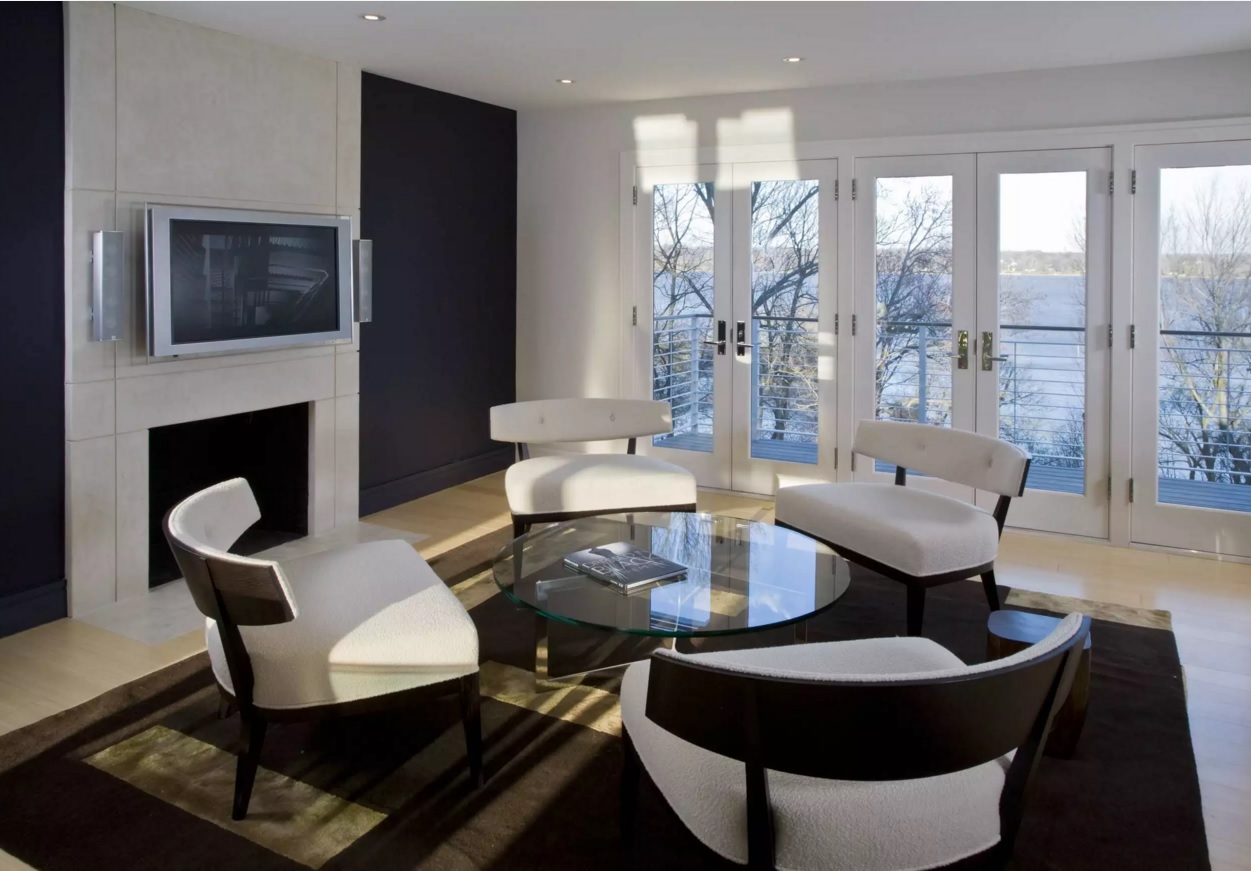 If the designers decide to refer to the Classicism, they try to bring some new design ideas into the atmosphere. Just look at this unique quilted vinous coffe table upholstered with leather. The corner sofa in the room is equipped with small table (on the original leg in the form of horseshoe) or stand from the both sides. The panoramic window is covered with vertical shutters consisting of glass panels. We can also admit the sepcial decorative elements in the form of gilded spheres and unusual form of the shadeless standing lamp behind the sofa; as well as the textured pictures made of skin of the animal. 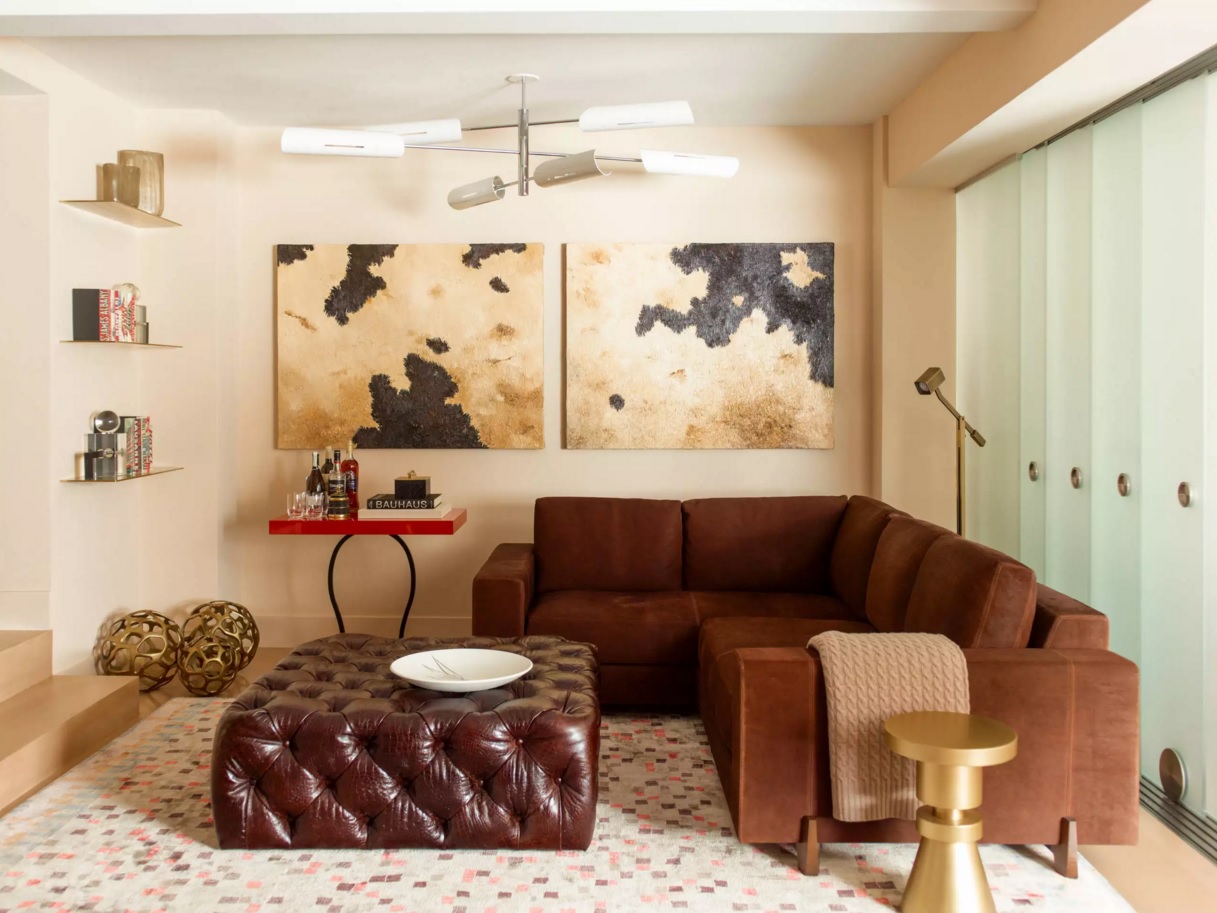 Nice idea for small place in the private house is to turn it into the improvised working place or the bar for two. It is practical and spectacular move. 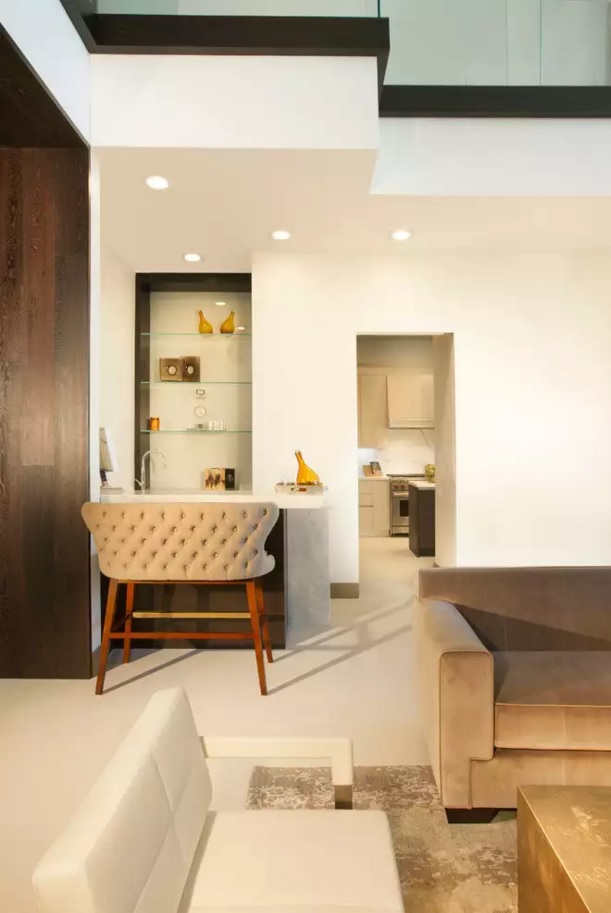 The form of the glass coffee table can also change from one apartment to another. This time designers have decided to emphasize the unusual form of the house itself with placing of smooth triangle coffee table into the resting zone composition of the living room. The fluffy carpeting under it is a little bit outdated but adds some warmness and coziness into the overall fresh situation of the interior. 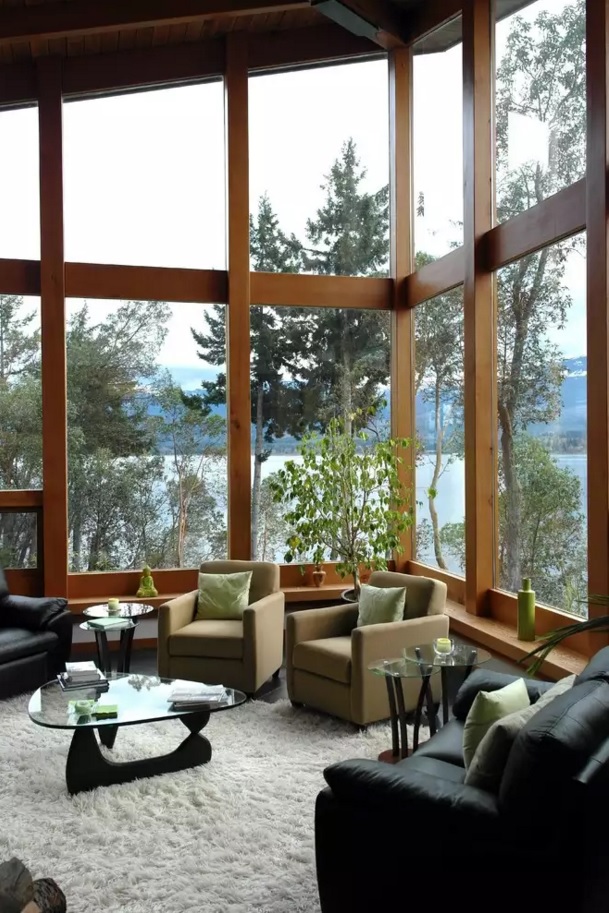 Another design solution for the cottage with large geometrically complicated first floor. Zoning of the big amount of space is a very hard task, especially when we try not to waste any area in vain. Here we can see the sining zone, kitchen, hallway and even a sleeper near the bearing pad. Wooden trimming and ceiling beams are the stylistic move to decorate exquisitely the light ecological interior of the mansion in the forest. 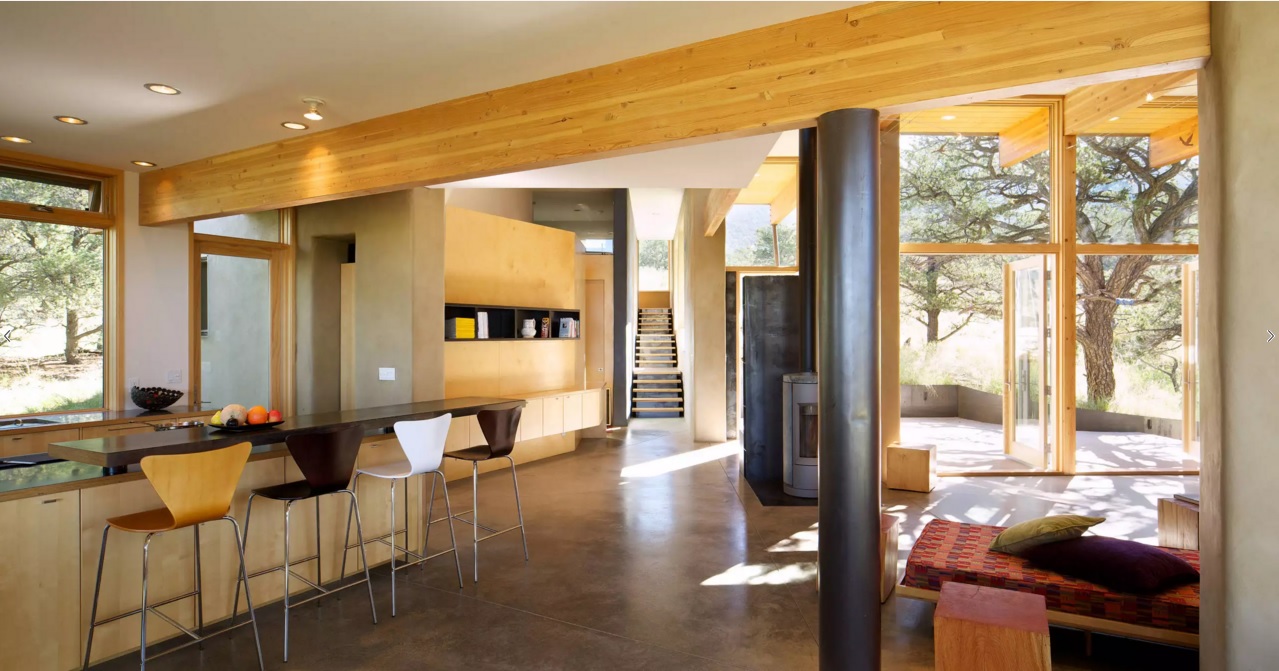 The trend of upcoming season is the small replaceable decor elements that can constitute their own composition. Then, we can just remove or displace them to achieve a new interior philosophy. On the photo below we can see the futuristic plastic armchair and green cushions as a vital accord for the spacious room with high ceiling. 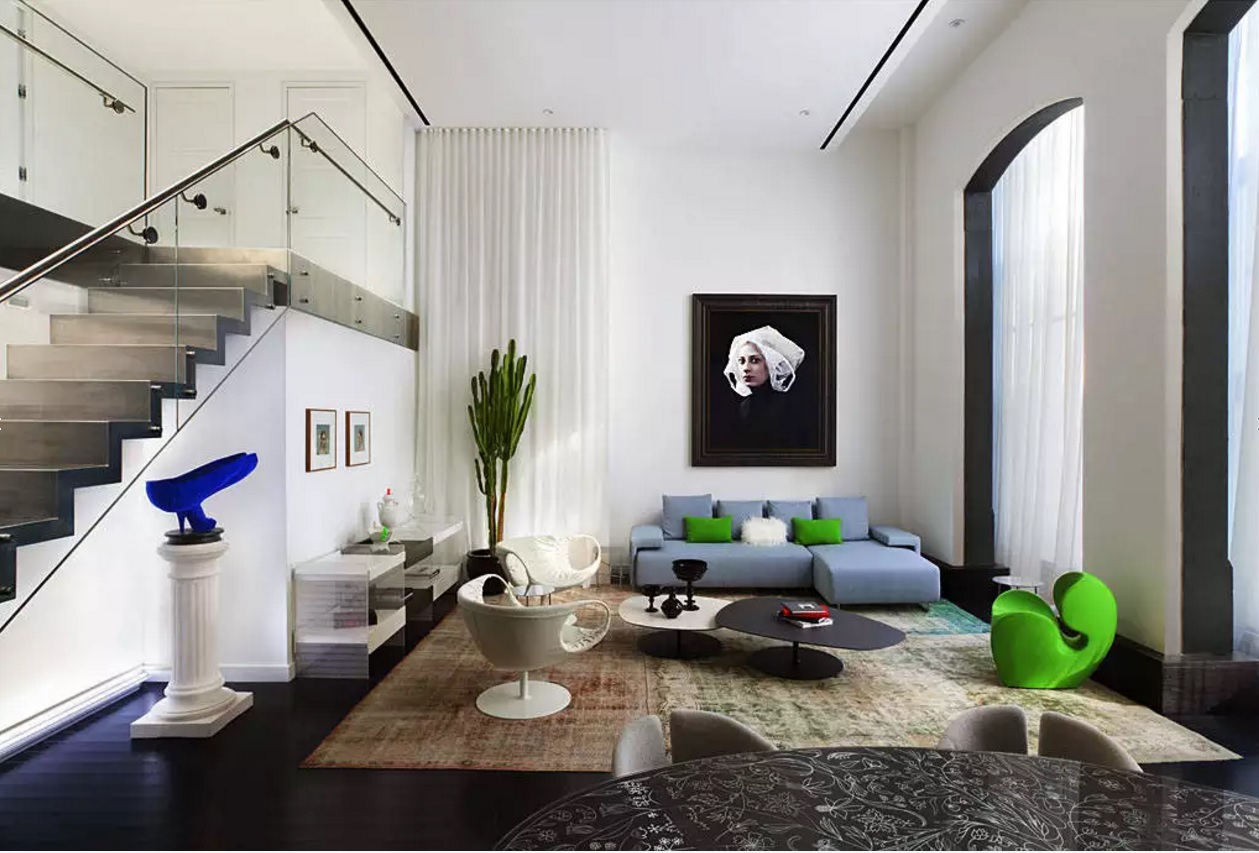 Classic interior is also enriches with new decorative elements of out era. We can see the modern lamps of plastic stands, modern plaster for the wall trimming and contemporary floor covering. 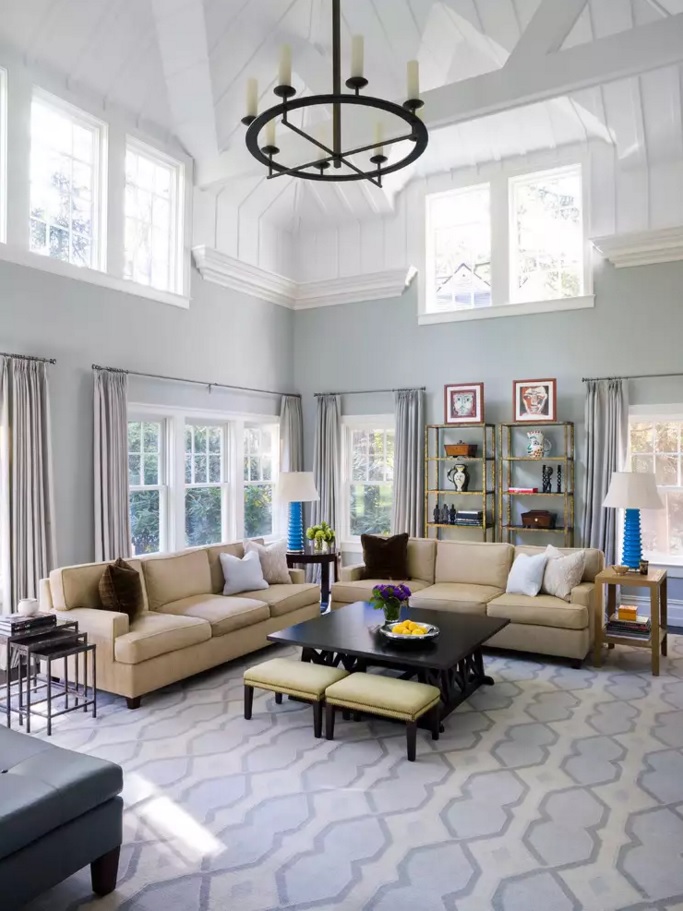 Small living rooms in the private houses are equipping with the maximum number of seats even at the expense of table in the center of such logical zone. It is better to locate video zone and the invariable fireplace as the accentual zest of the environment. 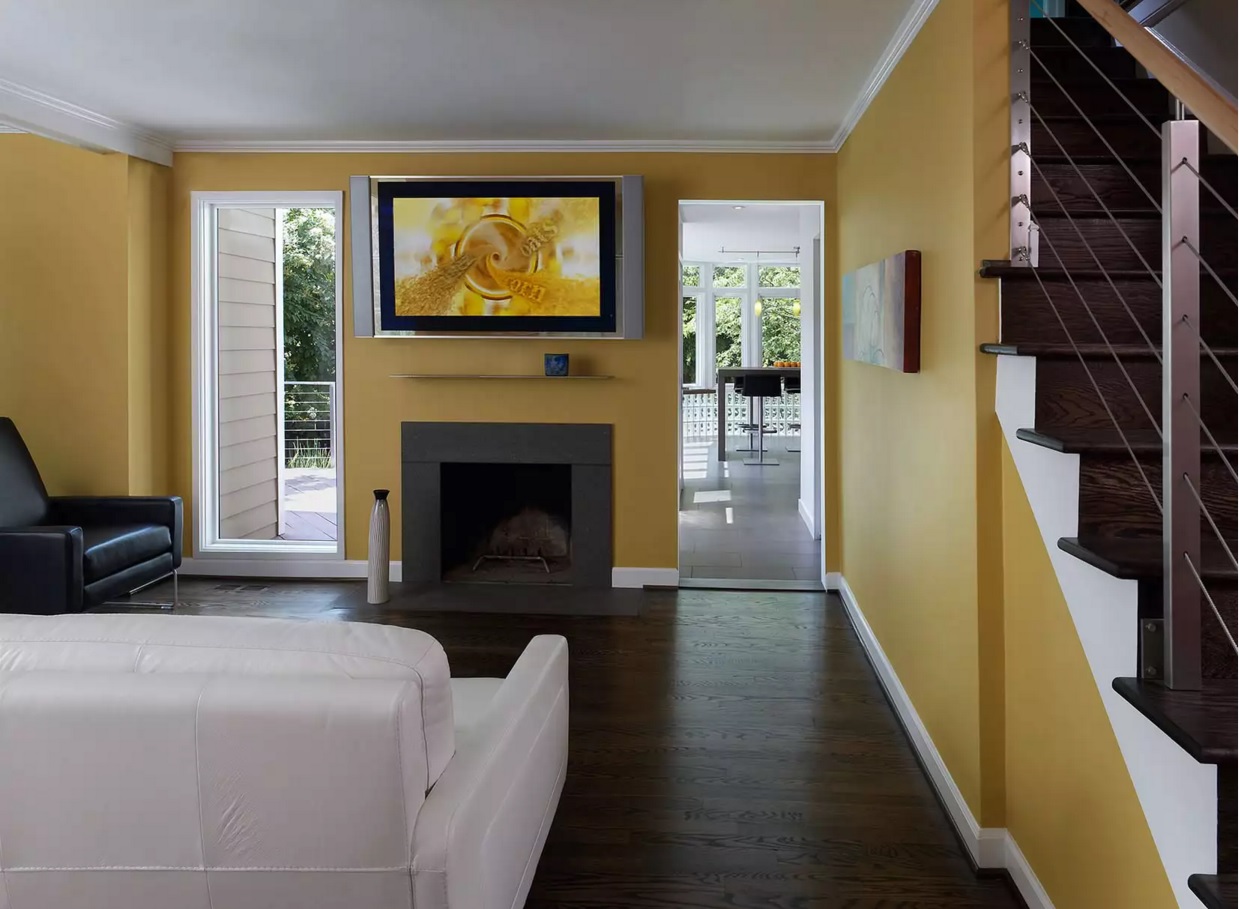 Folk and national themes are gaining amazing popularity. Its a sure way to show your individuality and discriminating taste of the style in your living place. The most skilled designers are trying to combine different folk themes into one achieving beautiful mixes. Rustic, almost grunge style have been extracted from the national traditions of the Middle East and Southern Africa. 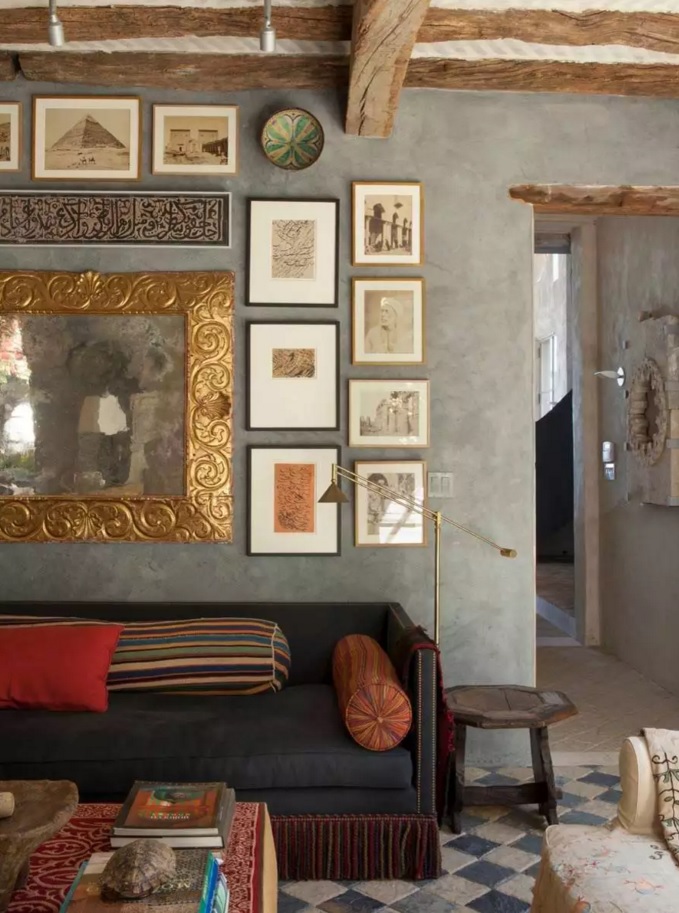 Modern interiors in the private houses doesn`t change so sharply and rapidly as their analogues in the apartment houses. But still, there were plenty of innovations lately. Some of them we have discussed and reviewed above. Anyway, we can distinguish some more trends which will have their continuation and development in the near future: 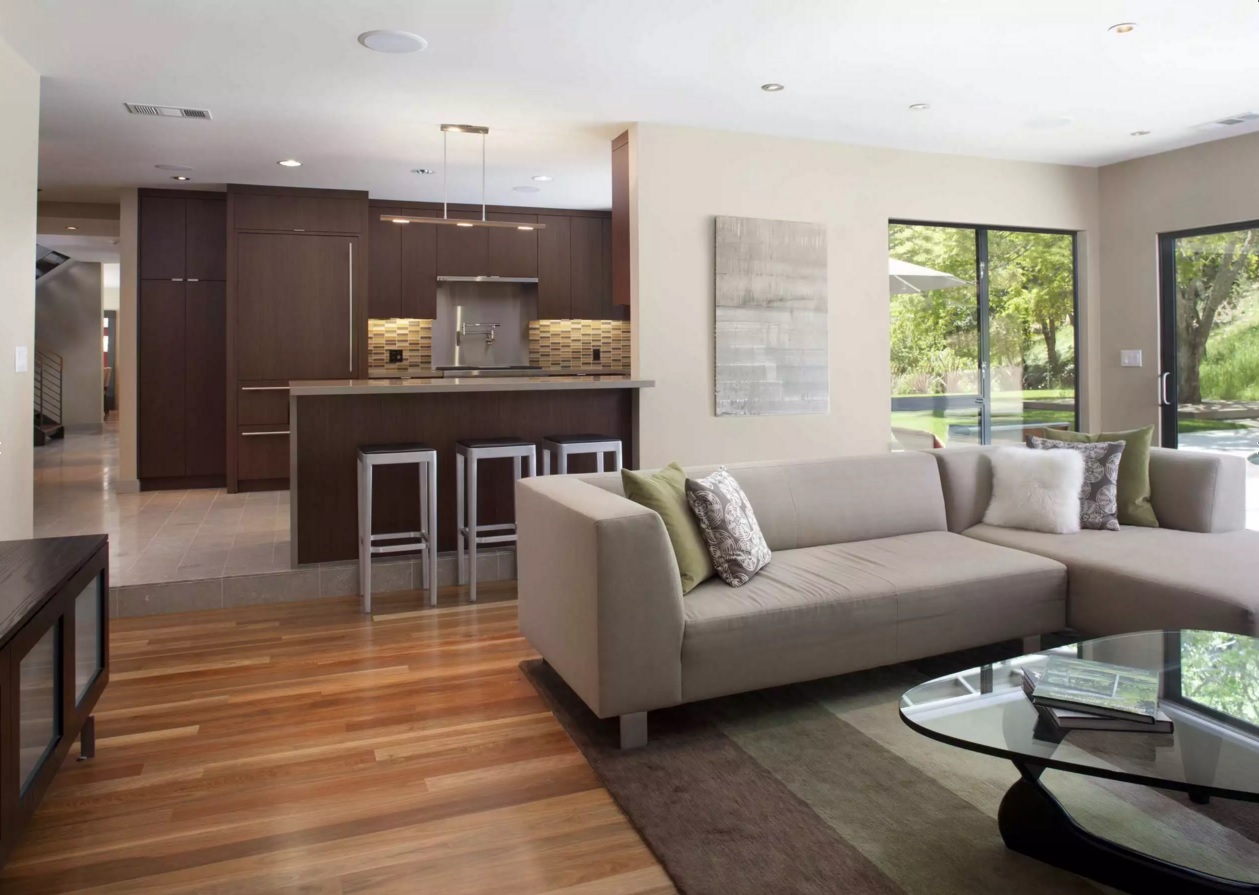 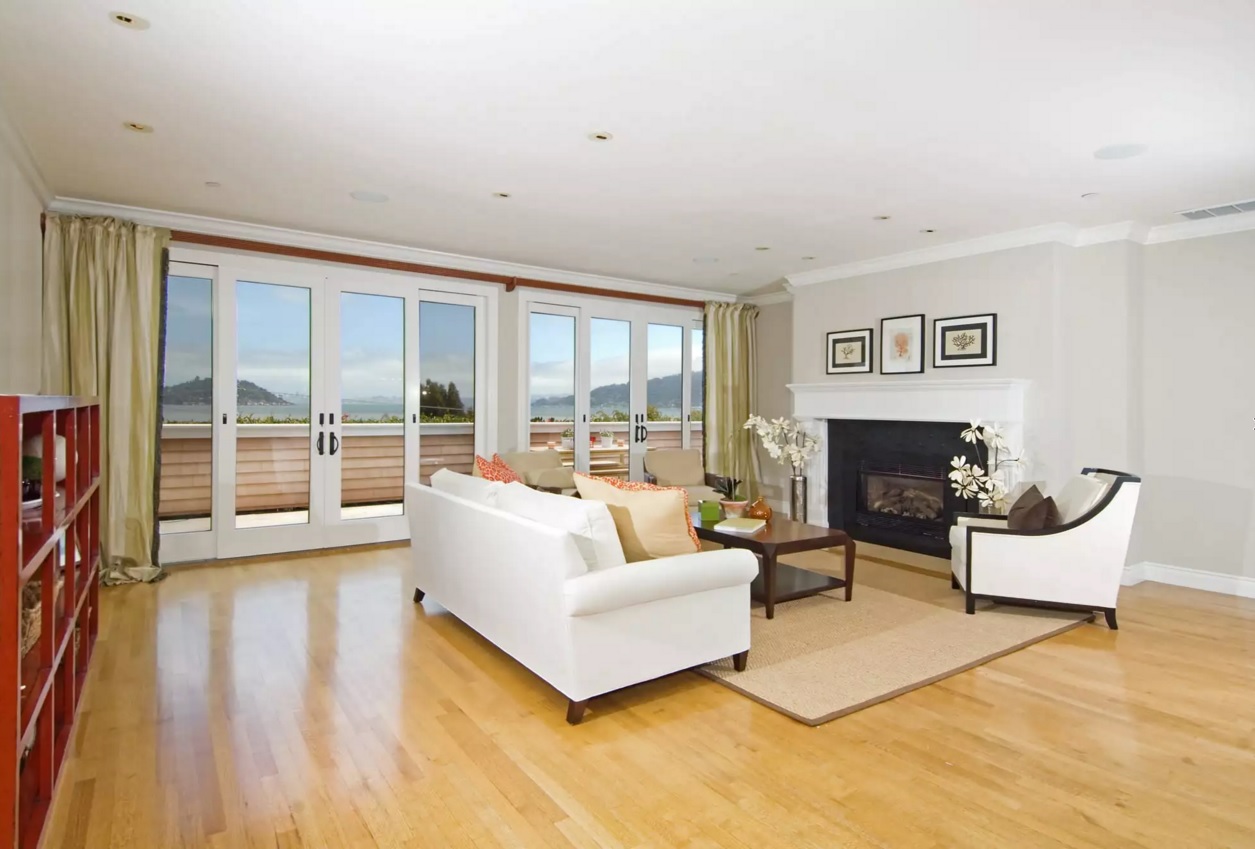 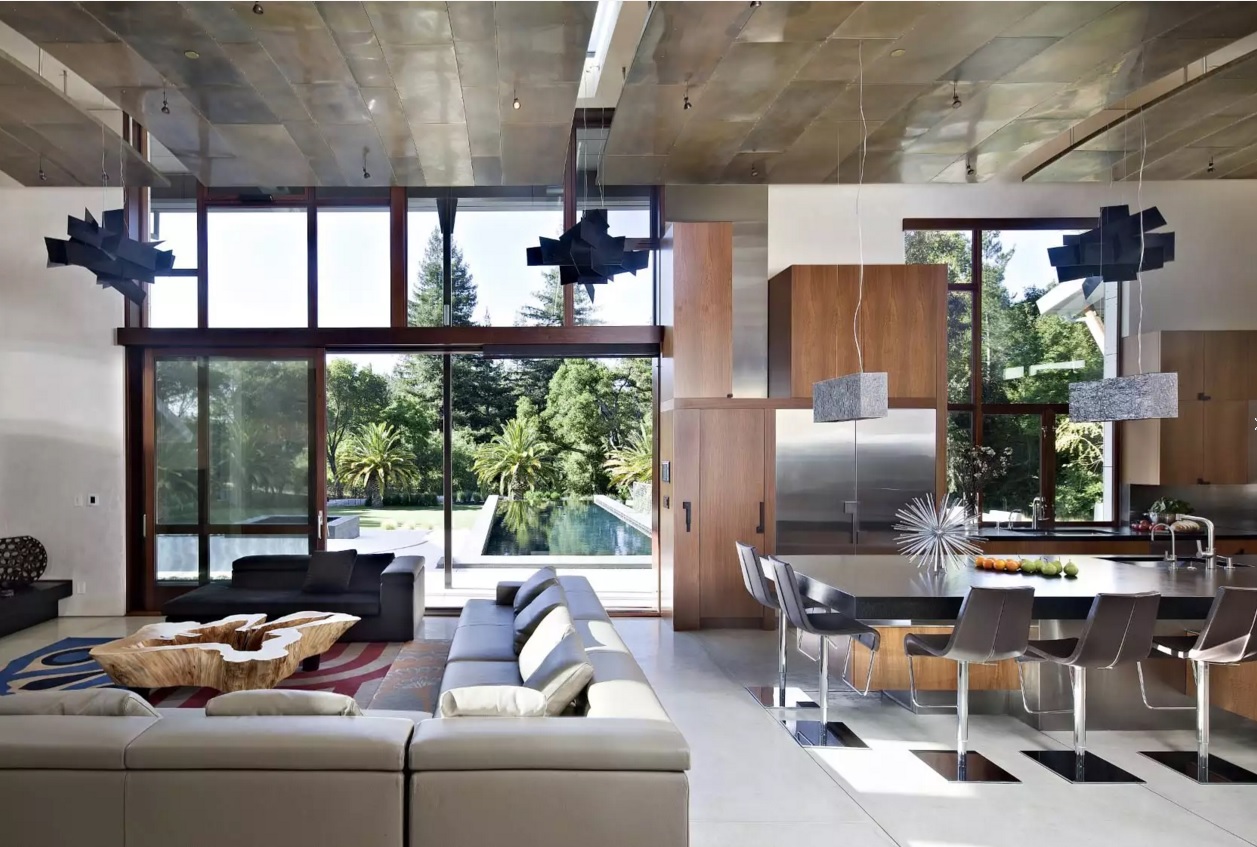 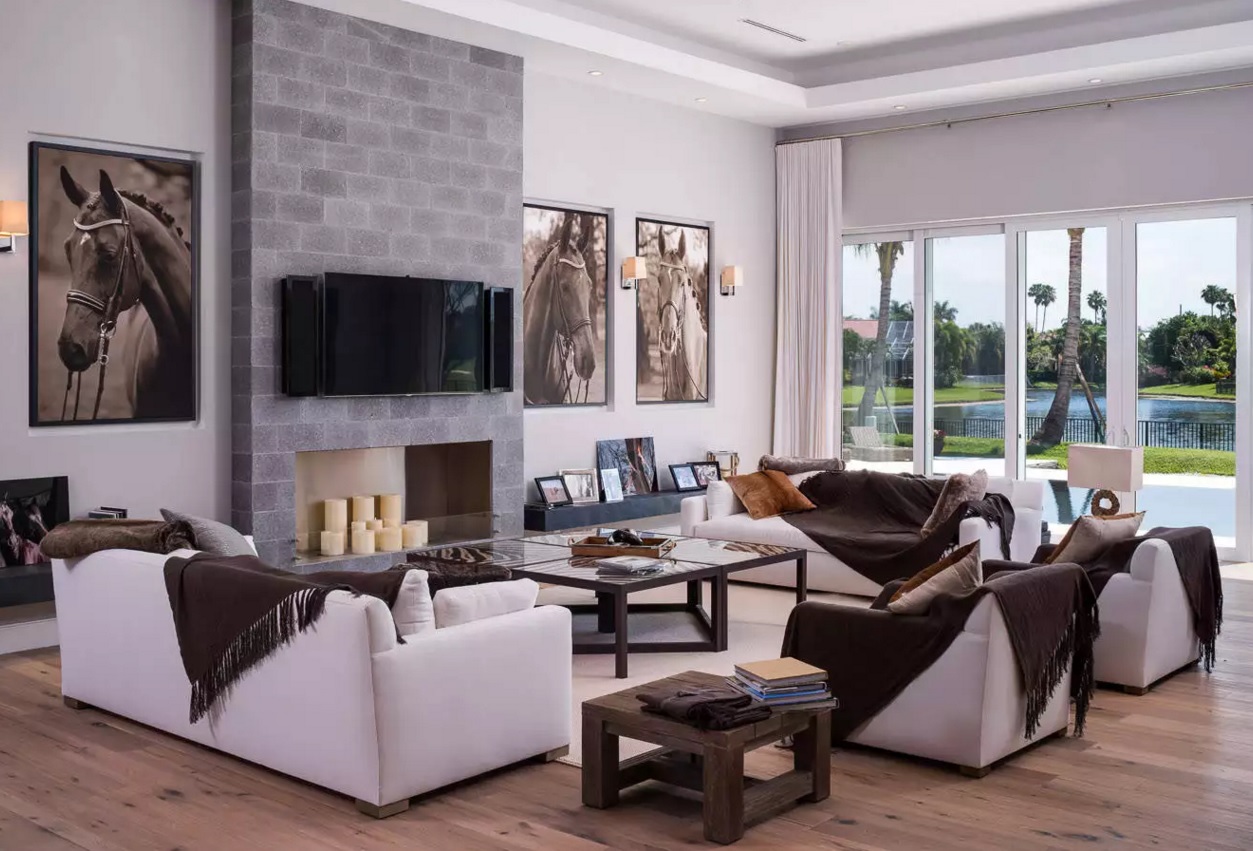 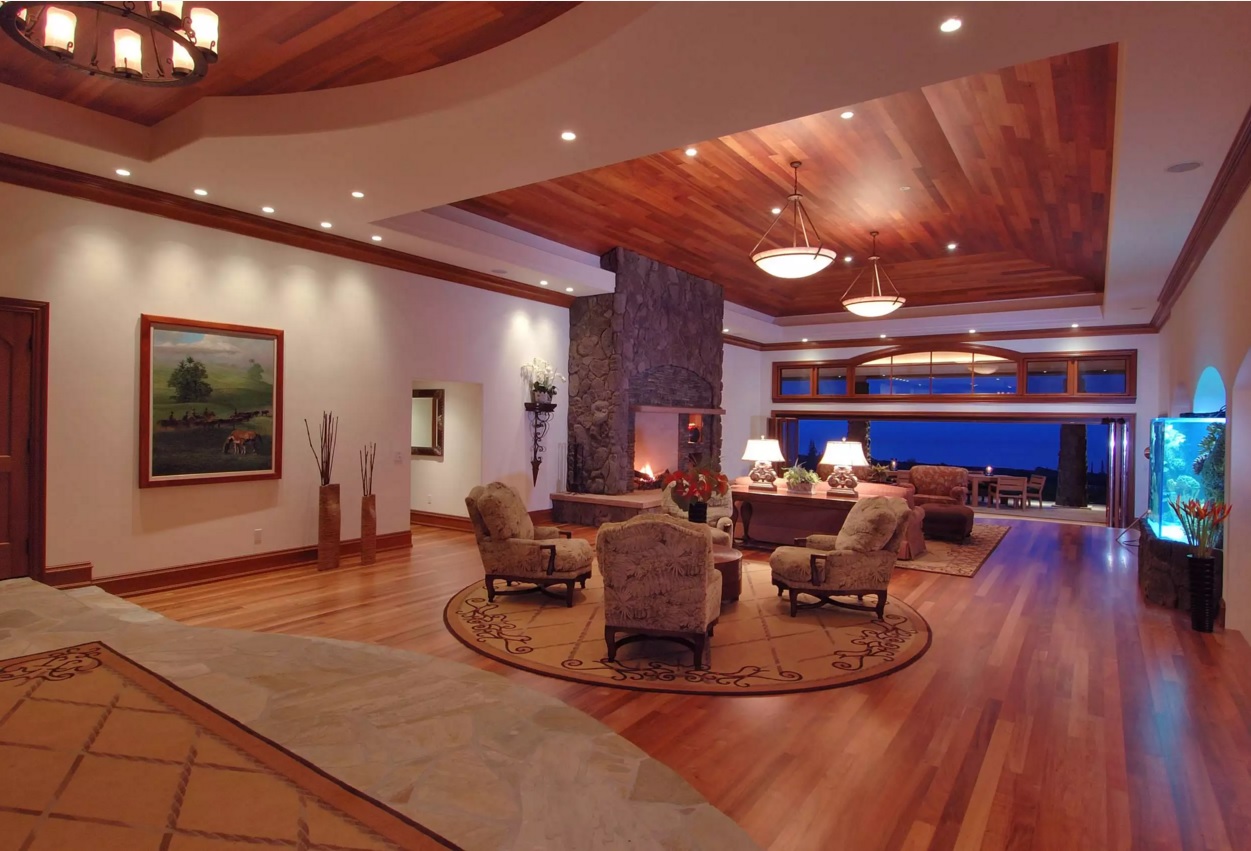 As for the apartment interiors, we have the same pattern. Designers are willing to find a new approach and materials in the designing of well-known styles, trying to bring some new elements to them. Even classic interiors can boast with built-in LED fixtures, electric fireplace and the recliner in the center of small room. 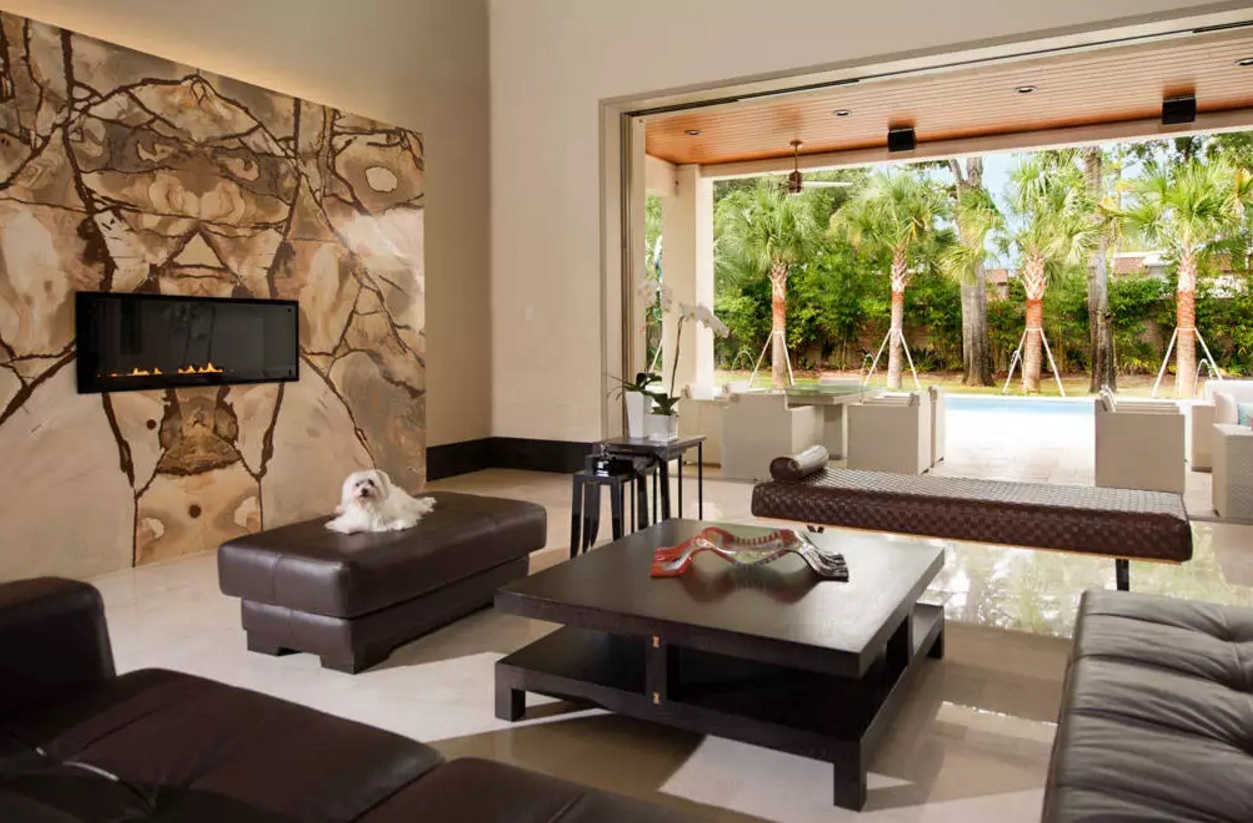 But the classic interiors are losing their popularity in favor of modern interpretations of Hi-tech, Minimalism, Futurism, Loft, Industrial and Eclectic styles. Nowadays, designers are looking for new materials to make the furniture facades gloss, reflecting the big amount of light coming through the panoramic windows with minimum of drapery. We can also admit a shift to the search for the new forms for furniture items and their execution. We are not surprised to see bent suspended ceilings of two-three layers, with different textures or absolutely new design of double-sided sofas for zoning of large rooms. 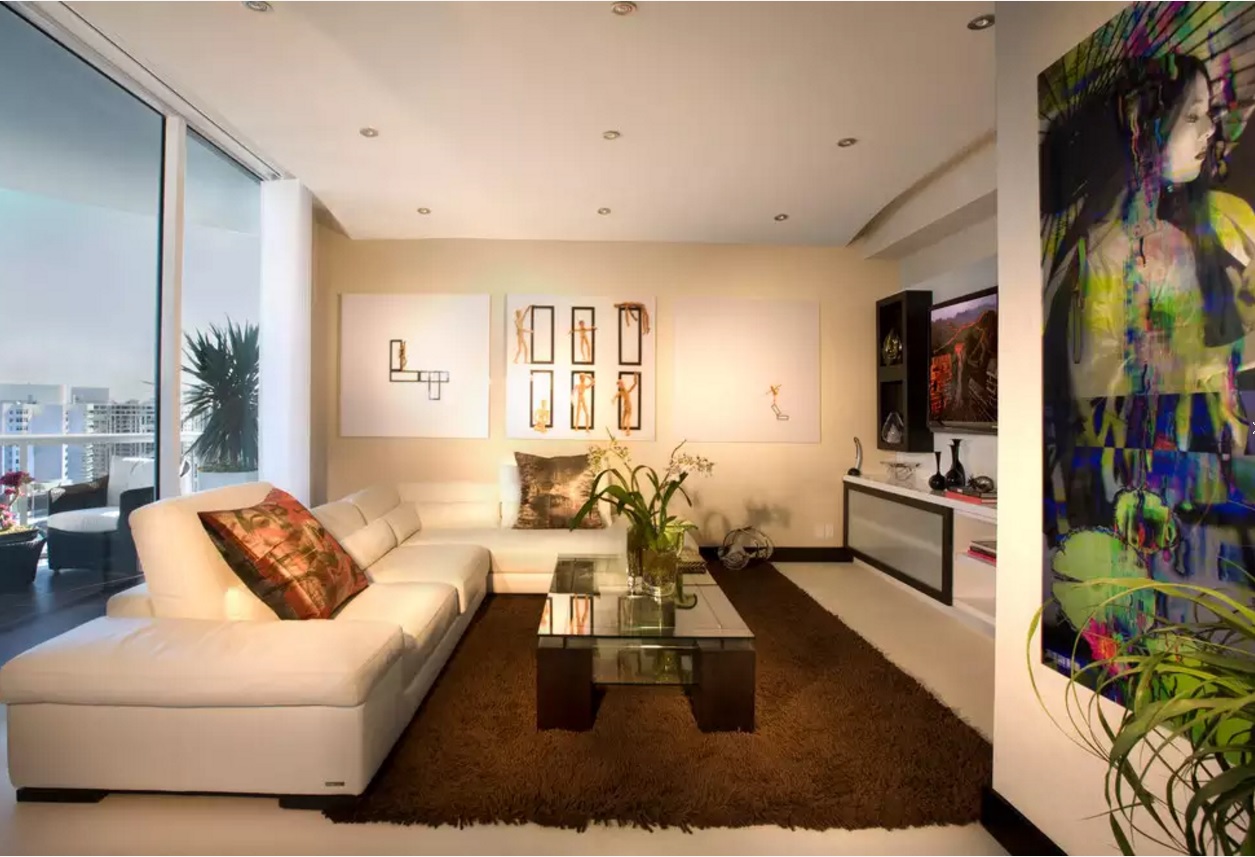 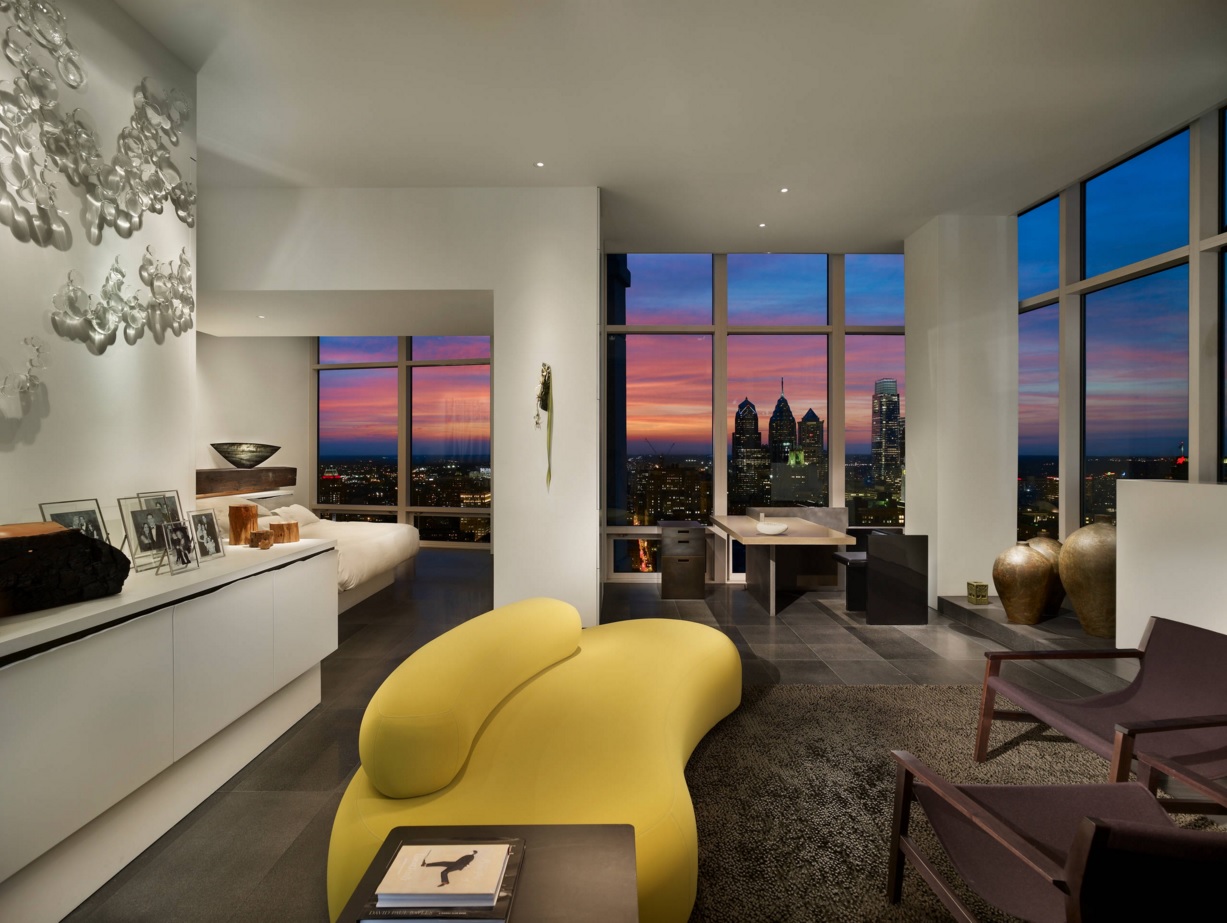 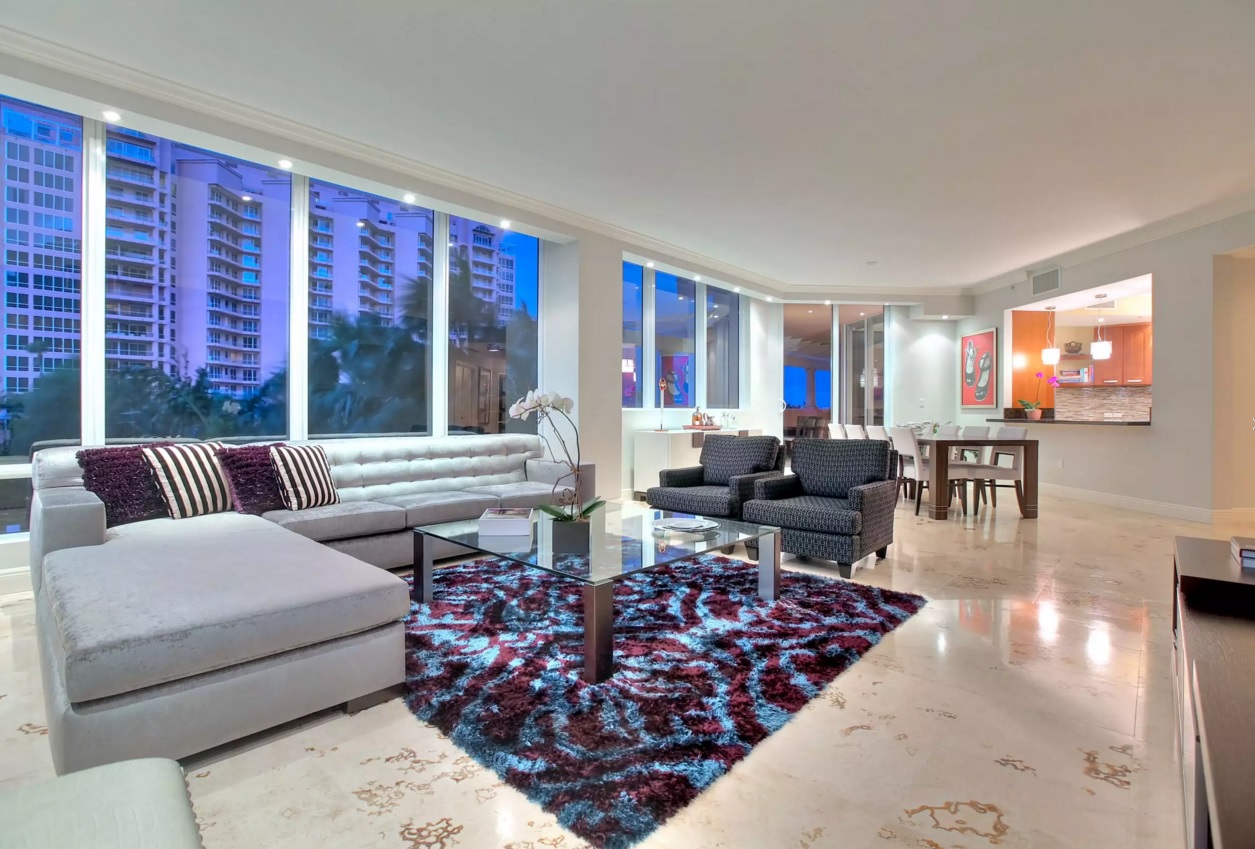 We can see that the Futurism itself begin to lose many of its elements. It transfers to the more or less familiar and seen in real life things. What we have considered an unusual thing not so long time ago, now have become the commonness. Have you ever seen the red plastic coffee table in the form of screw, let`s say, 5 years ago? 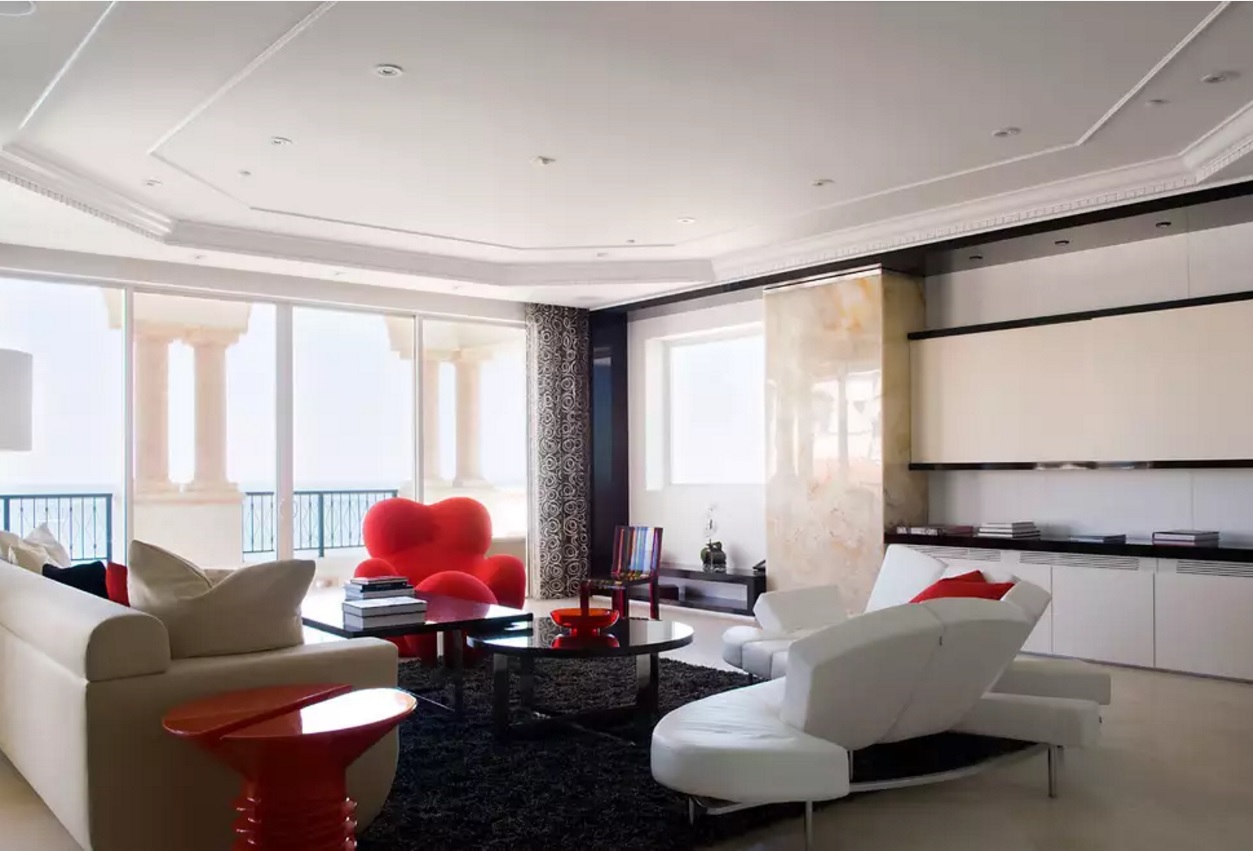 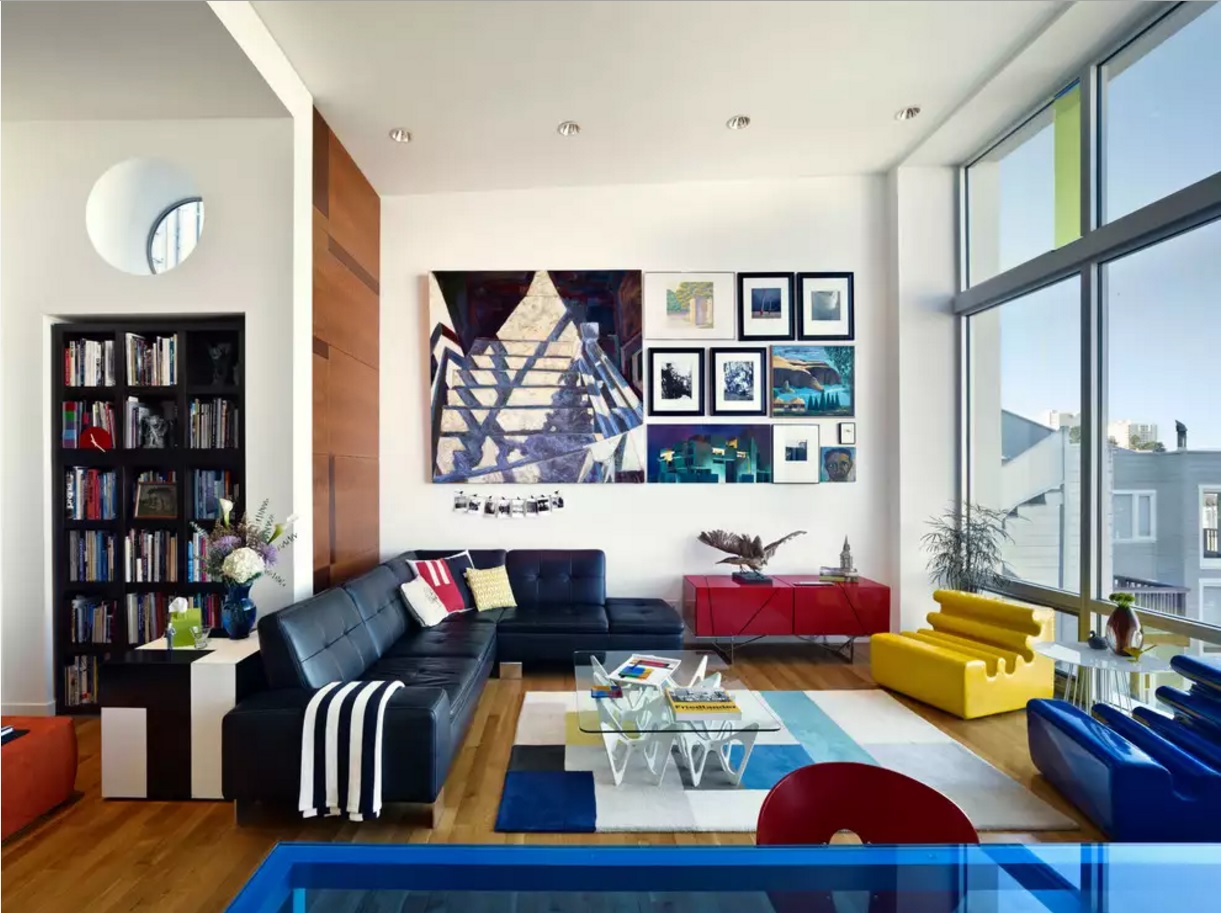 The mixing of styles is also the favorite method of decoration the apartment. Just take a look how organic can be the blend of industrial, vintage and eco styles in one small living room space. 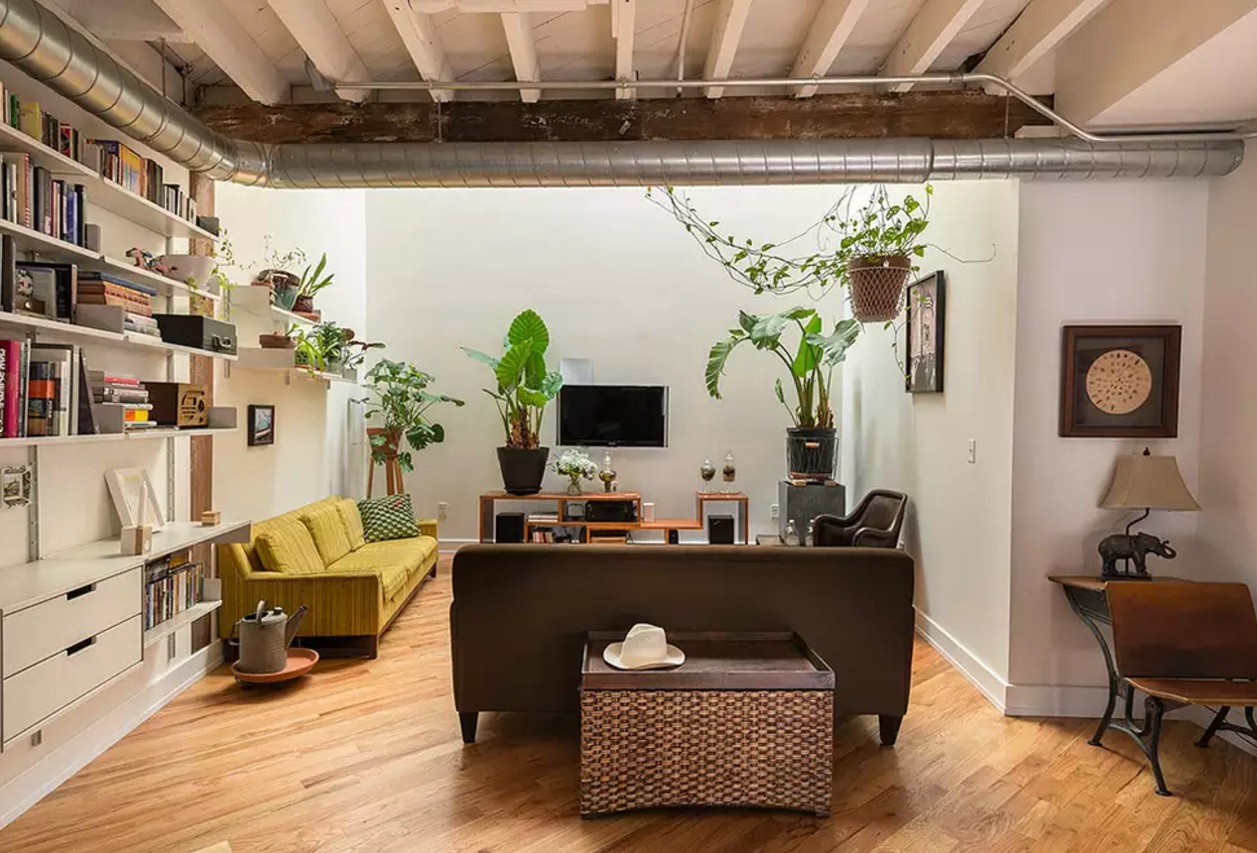 Summer is here so prepare for some parties and family reunions in the garden. Besides preparing the barbecue, don’t forget to think about keeping…