Nowadays, it is a very stylish trend to build blocks of flats with originally shaped apartments which are in the form of complex geomtreical figures, anything but the habitual square or rectangle forms. And this is a great opportunity to have unique design in your unusual home. You can include fantasy and create something absolutely new to your relatives, acquaintances and to share your constructive ideas with the world. And we propose to have a look teh real-world pics of the modern apartment 40 square meters irregular shape apartment photo review to be inspired and start with.

Usually such flats, especially of the tiny area, have the layout of studio condos and divided into the functional premises by the interior walls.  Such designer`s method is the only one to save the precious space and utilize it with maximum comfort and effectiveness.

Zoning is the big but not the only part of the apartment`s arrangement. Design methods of the irregular shaped flats have one significant distinction and advantage over the decorating of oblong rooms is the using of the hidden and built-in places for accommodation of different stuff and storage the necessary 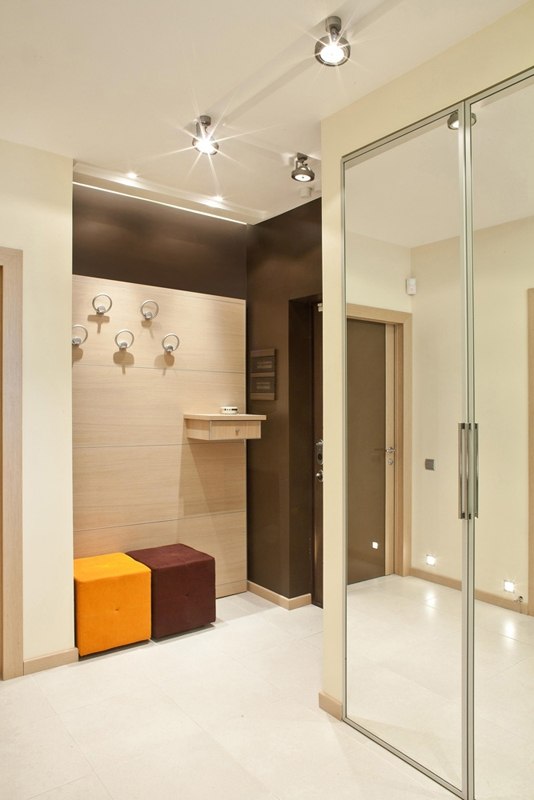 The original and bold design solution is to make a dining area in the end of the hallway mext to the door to the living room. Beige color palette and the row of adjustable projectors make the hi-tech decorated space more vivid. Look at the small accents on the steel elements: cabinet door frames, interiro doors` handles, legs of the bar stools – all of them impacts and contributes to the unrepeatable play of the steel and glass in the closed space. 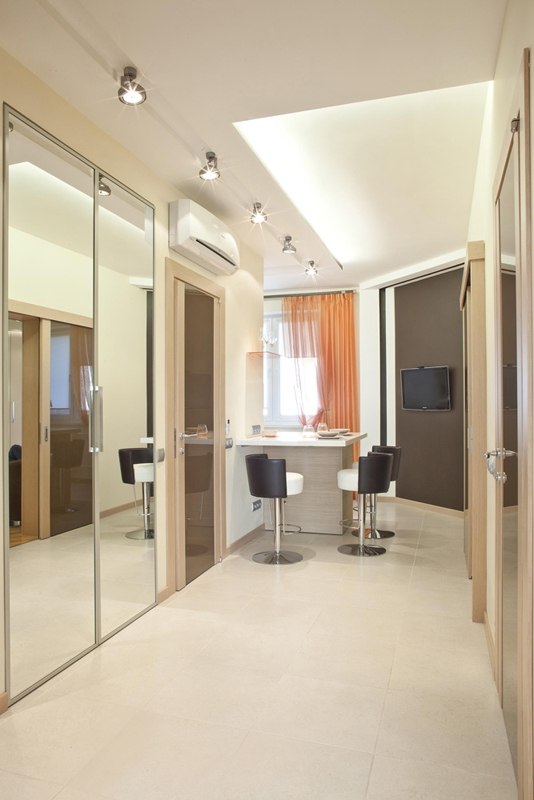 And as you can see it on the photo below, the idea with the allocation of the dining zone was right in place as the counter is continuing and flows further to the kitchen set which is harmonically lurked in the corner of the apartment. Bright orange tulle on the windows and the transparent stand for the wineglasses make the interior ready for bright accents such as orange napkins. Large floor tile emphasize the scale of the design scheme. And the figured form of the ceiling is the prove of integrity of the whole design composition. 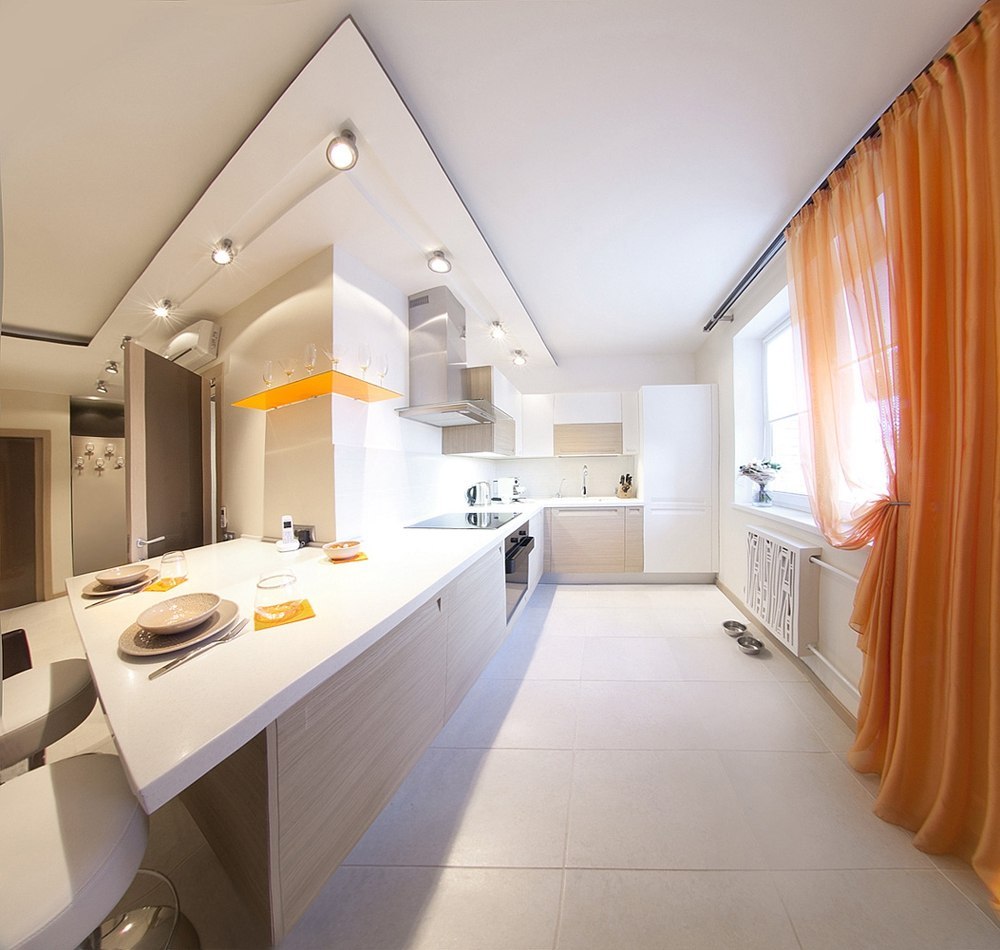 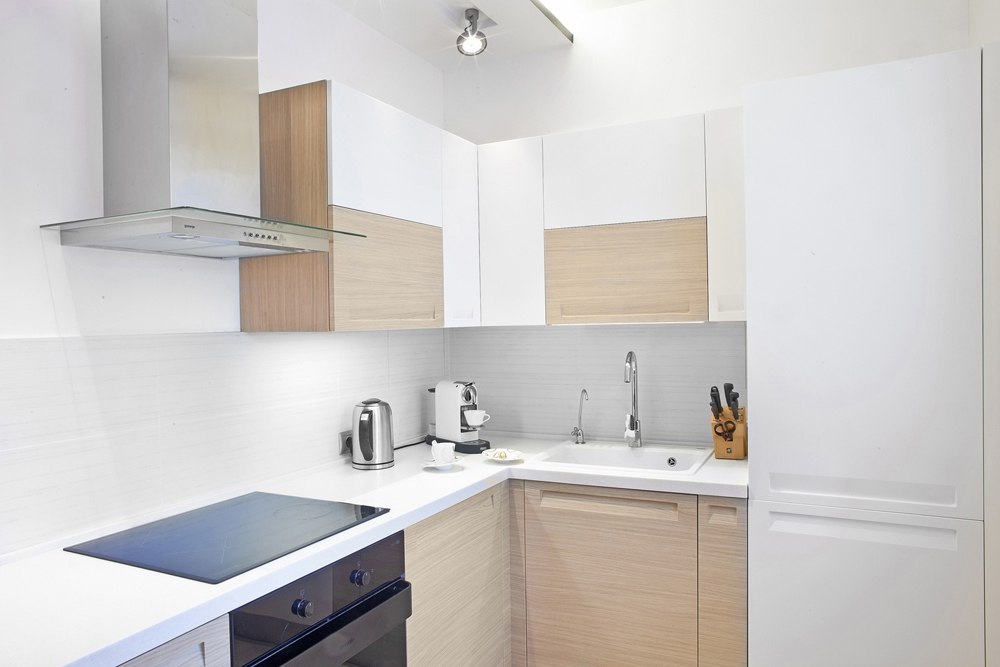 This composition is partly extended in the living room too. This geometrically irregular room is the paradigmatic example of zoning and arranging of the living space. The common area is trimmed in soothing green pistachio hue with naturalistic theme. It is separated from the other zones with floor finishing, ceiling levels and methods of decoration. Though it is very small, it has enough space to accommodate a small company of friends or united family in front of the TV for the late show. 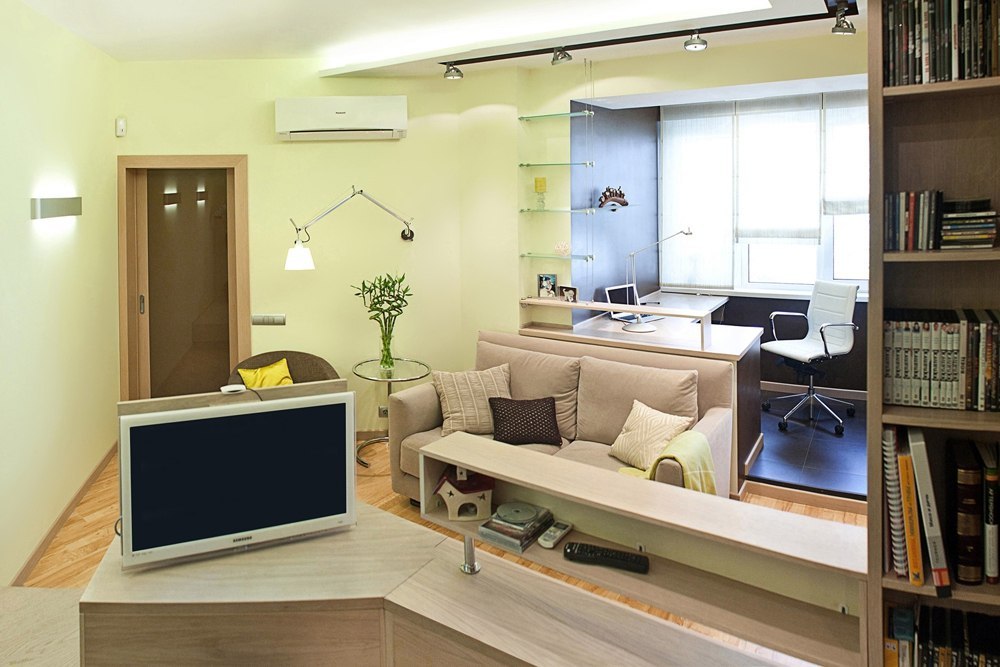 And right here in th estudio living room we can see the sleeping place for two, which is fenced off from the rest of the area with the functional monolithic nightstands and is executed in the form of the pedestal with the decorative lighting on the whole perimeter. 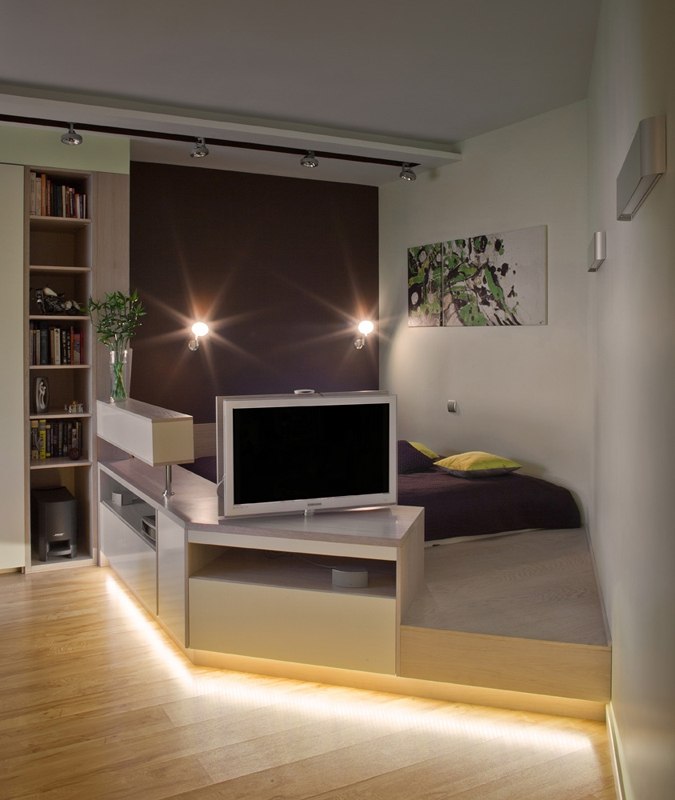 The stand for TV-set has a swivel mechanism that gives an ability to turn the screen wherever you want to watch it from the bed or the couch.

Also, pay special attention to the storage systems utilizing every useful inch of the area. Designers have managed to locate the cabinet in the recess of the wall and the open shelving next to it which is looking great. 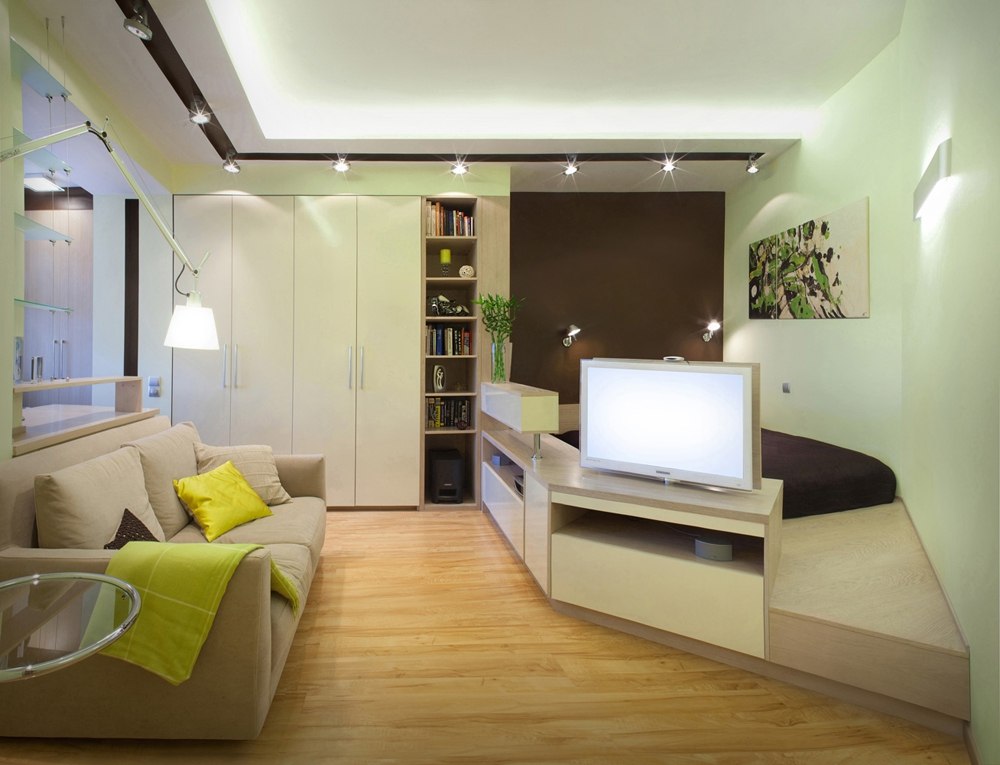 The common zone has the joint wooden rack with the working zone of the home office. Also there is an open glass pendant shelving in the light green tone to symbolize the notional continuation of the living. 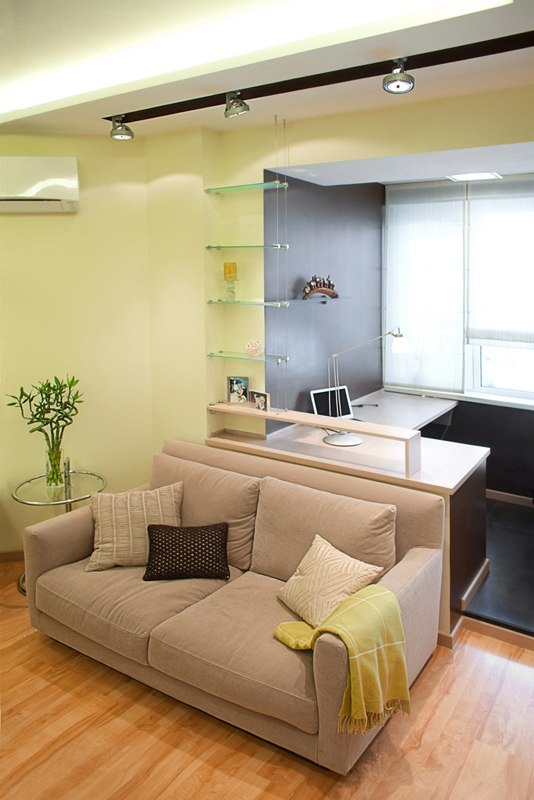 And what can be treated as absolutely different zone in stylistic regard is the bathroom. This utilitarian premise is trimmed according to the modern style with different materials of the wall finishes to fit the humidity. And we also can see the pistachio doors of the wall built-in locker reminiscent the overall design scheme of the apartment. Besides, it is also full of artificial lighting systems, lots of glass surfaces and functionality above the visual effects. 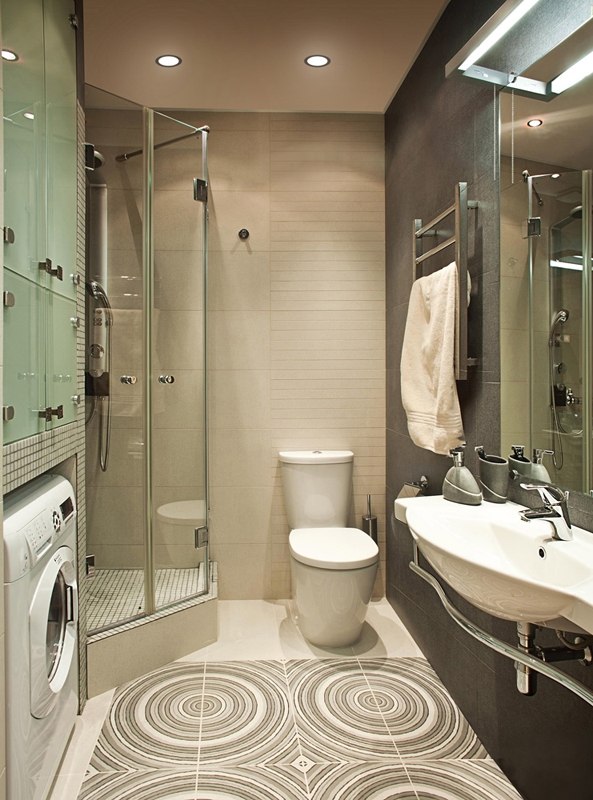 The kitchen is without a doubt the most complex and functional room in any home. Different appliances, furniture, additional lighting and systems are indispensable…