Your house may or may not catch fire when hit by lightning. Read on to learn what happens when lightning strikes a house here. 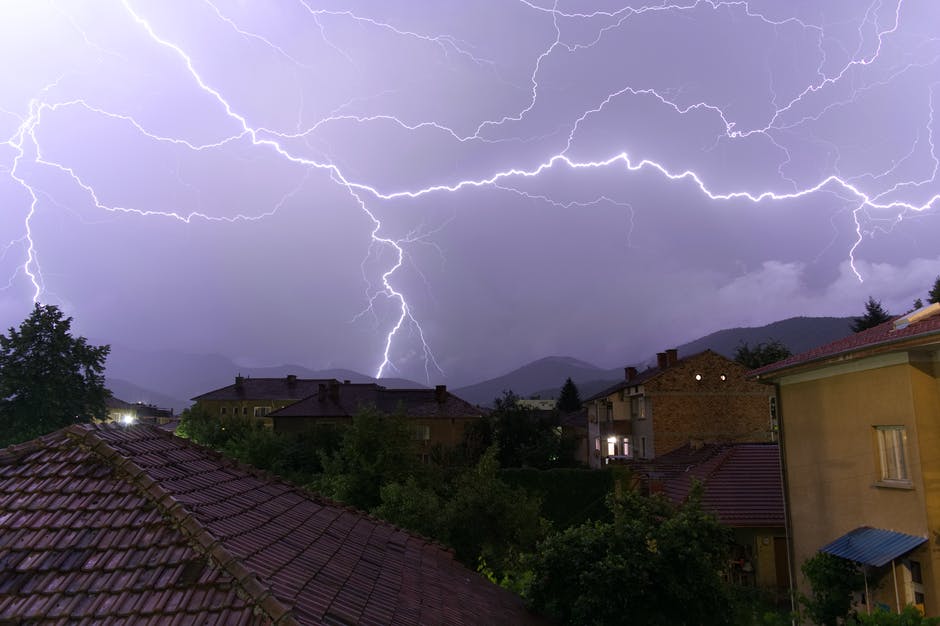 More than three million lightning flashes occur every year. That’s roughly a lightning flash every 44 seconds. And while it’s unlikely that lightning will strike your home, it’s certainly not impossible.

When lightning does a strike, it can be a very frightening thing. Not just because it’s immediately followed by a loud crash of thunder, but because there can be physical dangers associated with it too.

Interested in learning more? Continue reading and we’ll walk you through what happens when lightning strikes a house.

What Happens When Lightning Strikes a House?

The main goal of a lightning bolt is to find the path of least resistance from the cloud where it originates deep within the ground. Most homes are stuffed with a variety of possible routes for the lightning bolt to take to reach its desired destination.

This can include water and gas pipes, phone lines, downspouts, electric lines, gutters, internet/cable TV lines, and metal window frames. Basically, anything in a house that is conductive is fair game for the bolt of lightning to follow.

That lightning bolt just fought through miles of air, so it will be more than satisfied to make its way to your home’s conductive objectives.

When lightning passes through a home, it will often “branch off” and make use of more than one path to the ground. Lightning can also jump through the air to go from one path that is conducive to another. This is known as a side flash.

A lightning current can create significant damage to a home that doesn’t have a proper protection system in place. There are three main hazards that a bolt of lightning presents to a house.

The biggest hazard is fire. Wood and other materials that are flammable can easily ignite when lightning comes in contact with them.

Lightning tends to start a fire on the roof or in the attic of the home. This is because it usually has to pass through these areas before it finds a more conductive path. And when lightning travels through wires, it will usually burn them up and can destroy circuits.

Lightning can choose the wiring of a home as its path to the ground. This can damage your home’s circuitry as well as any appliances that are plugged into them.

There is also a shock wave danger. Thunder is produced by the shock wave that comes from lightning. If the shock wave is close enough, it can easily damage brick, stone, concrete, and cinderblock.

Stone and brick chimneys are also usually damaged by lightning. The shock waves can also destroy plaster walls and glass windows. Shrapnel can also end up flying in all different directions after a lightning strike.

How to Stay Safe From Lightning When Inside Your Home

Now that we know that lightning tends to follow conductive paths—mainly pipes and wires—the best thing a person can do is to avoid those paths as much as possible during a storm. You should avoid any direct contact with items that are plugged into your home’s circuits.

This includes washing your hands, typing on a computer, using a wired phone or tool, taking a bath or shower, doing dishes, and playing video games. You should also avoid all metal-framed windows.

It is safe, however, to use wireless devices like remotes, cordless phones, and cell phones.

You should also avoid directly touching the ground. This is because lightning can travel across wet concrete and through soil. You should wear shoes whenever you’re walking in a patio, garage, or basement.

What to Do If Lightning Strikes Your Home

If your house is directly hit by lightning, the first thing that you should do is check for any possible fires. If you find a fire, then call the fire department.

While the attic and roof are the most common places for fires, a fire can be started anywhere after a lightning strike. Fires can even start in the walls and may not be detectable at first. Keep an eye out for falling debris from damaged walls, shingles, and chimneys.

You also want to think about reaching out to an electrician. Have a reliable professional, like the technicians at fhfurr.com, come to your house and inspect for any damage that could be a possible future fire hazard.

Can You Get Struck By Lightning When You’re In Your House?

You can get struck by lightning when you’re in your house, but it’s very rare. If you’re in the path of the lightning, you can end up getting an electric shock and burn injuries. Usually, a person who gets injured is using some kind of connected device or is resting on something like a metal-framed window.

The Importance of Understanding What Happens When Lightning Strikes Your House

Lightning is something that creates a lot of fear in people. And there are good reasons for this. Your home is filled with pathways that are conductive for lightning to reach the ground which can create a danger to your house and the people in it.

Are you looking for other helpful articles like this one? If so, check out the rest of our blog today for more!

Stainless steel is an old friend of every kitchen in the world. We all have all manner of pans, kettles, dishes of steel. Somebody…