Home » 20+ Most Unusual Houses in the World with Photos

The active implementation of innovative technologies in the development of architecture brings incredible results. We can talk about masterpieces in this area indefinitely. However, we tried to pick up a considerable collection of the most impressive, unusual, and sometimes even shocking architectural projects. Enjoy this small collection of 20+ most unusual houses in the world with photos.

The house was built in 1958. At the heart of the architectural design of the house are 16 triangles. This is one of the projects of Charles Haertling (an organic architect). 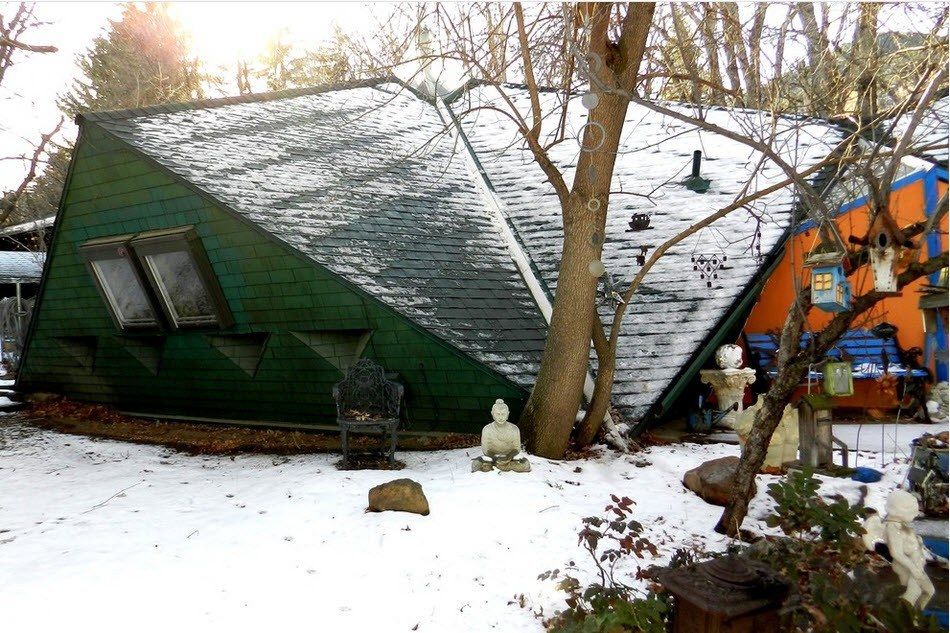 Round Villa under the Ground (Vals, Switzerland)

In the alpine village of Vals, there is an unusual local landmark – an underground villa that faces the mountains with its only facade. The layout is thought out in such a way that each room has its own window. Sunlight from one facade applies to 4 bedrooms, a kitchen-living room, and a library. 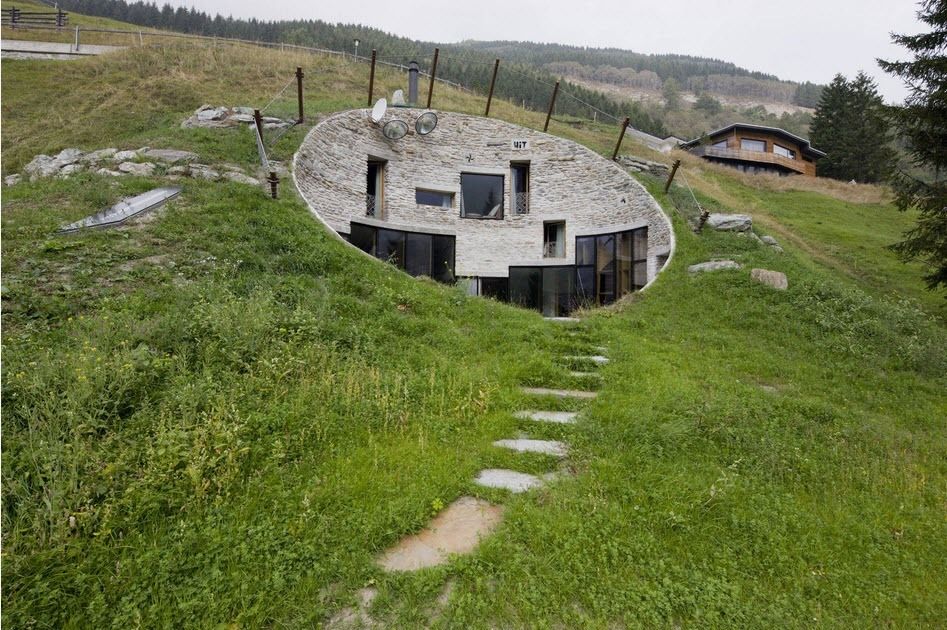 Other built into hill underground houses you can find in the respective article.

This unusual house in California strikes with its spectacular dynamic form. Its facade is made in wood and metal decoration. Thanks to its curved outline the house looks harmoniously against the background of the surrounding hilly landscape. 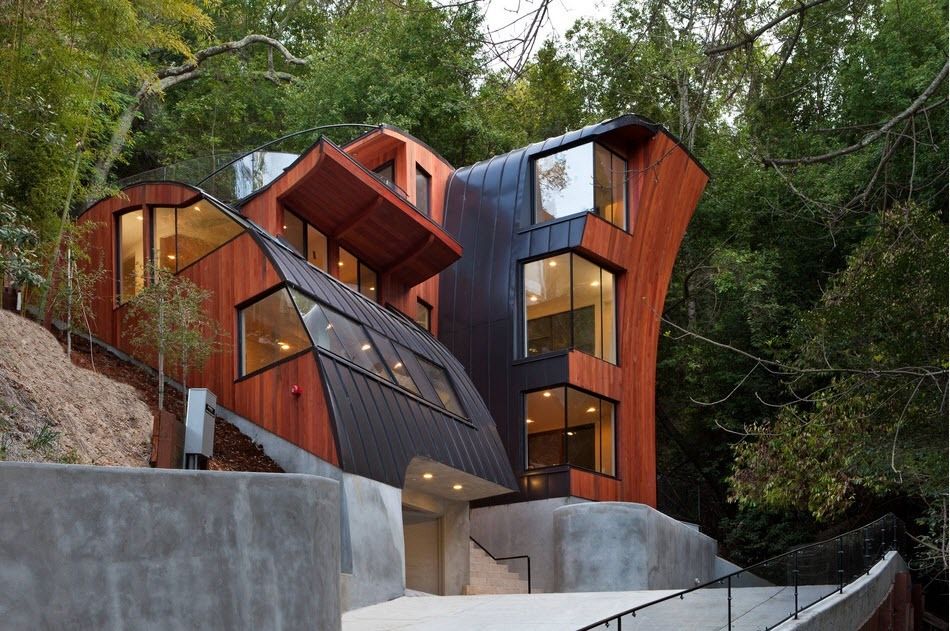 Under the Wing of Boeing (Malibu, USA)

This building impresses with its unique roof – on the skeleton of concrete lie the wings of the decommissioned Boeing 747. The landlady spent 50 thousand dollars on them. 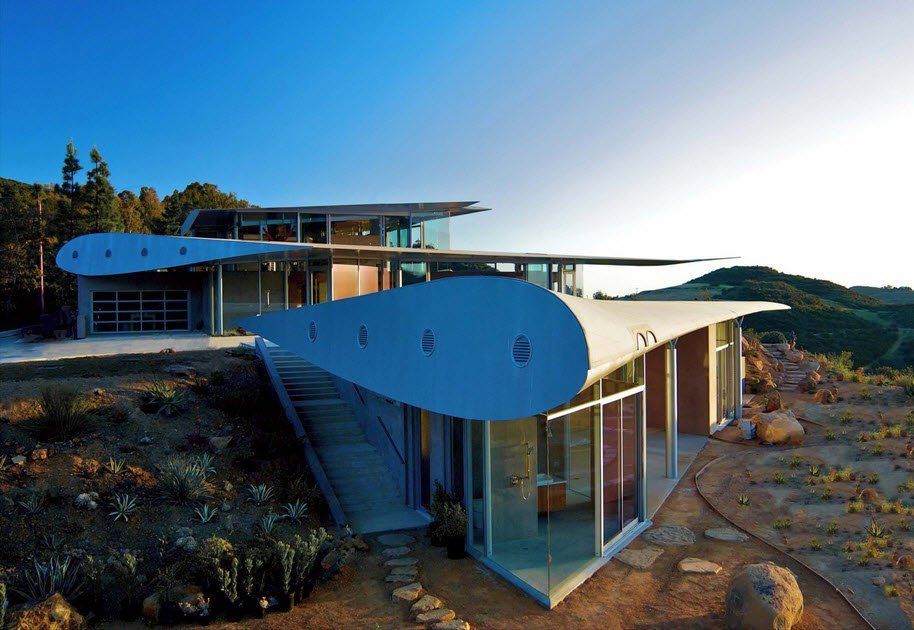 House in the Form of a Ball (Zelenograd, Russia)

There are miracles of architecture in Russia. At the request of the hostess, her unusual summer cottage in the suburbs of Moscow should not resemble the city house. The dome house is trimmed with a pine tinted board from inside, and outside it is covered with larch shingles. 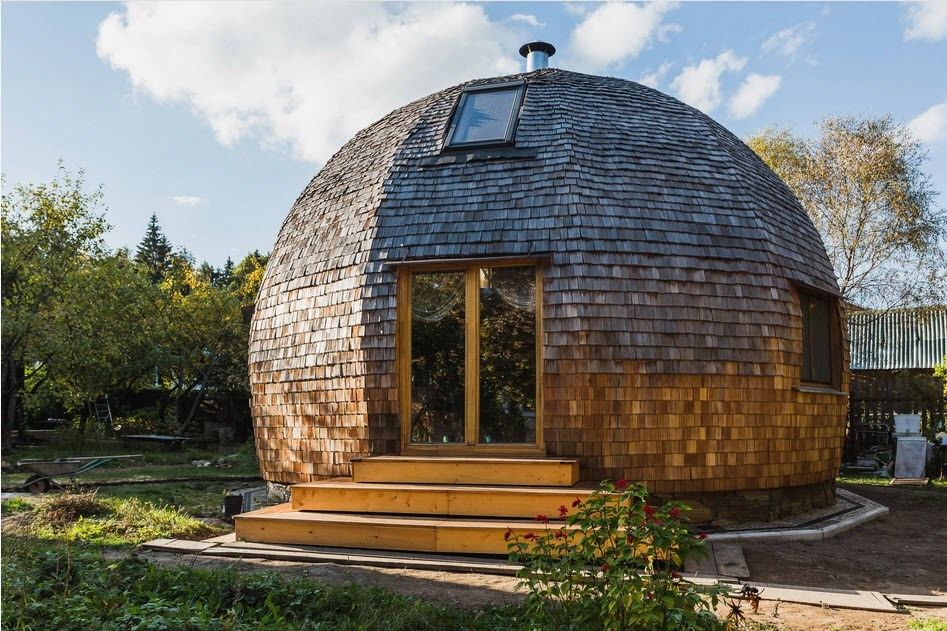 The mirrored facades of the two buildings blend seamlessly with the scenery around. The idea of ​​the design of the Italian architect Peter Pichler is to move the blocks to give dynamics, to glaze the facades with mirror panels, decorate the ends with windows in the form of wedges, and lift the entire building onto the platform to create a feeling of lightness. 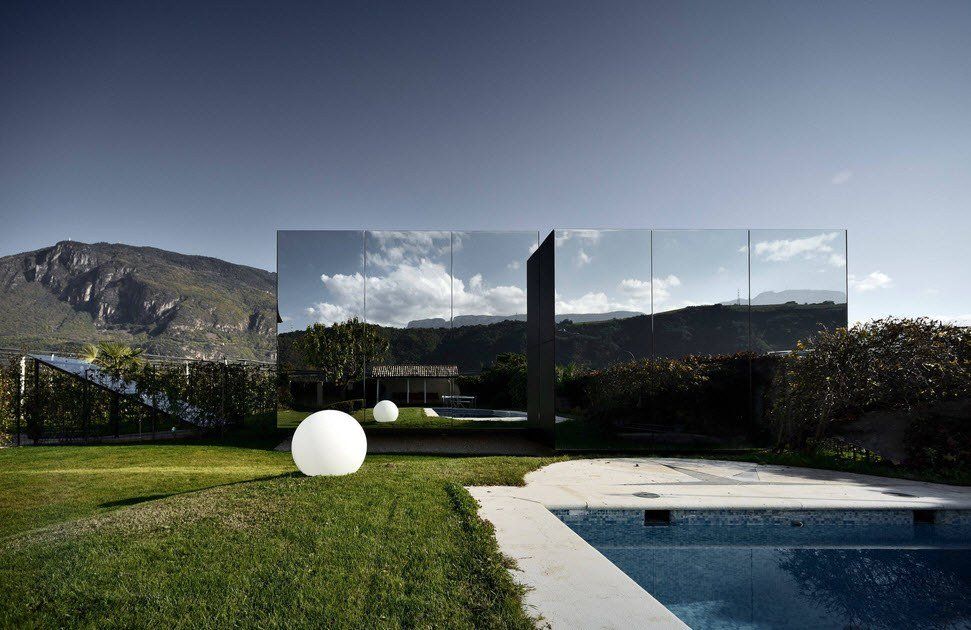 The modest budget of the owner of this house motivated him to a creative experiment. Part of the dwelling is dug in the hill, the walls are made of stone, clay, and wood, and the frame is made of thick branches. 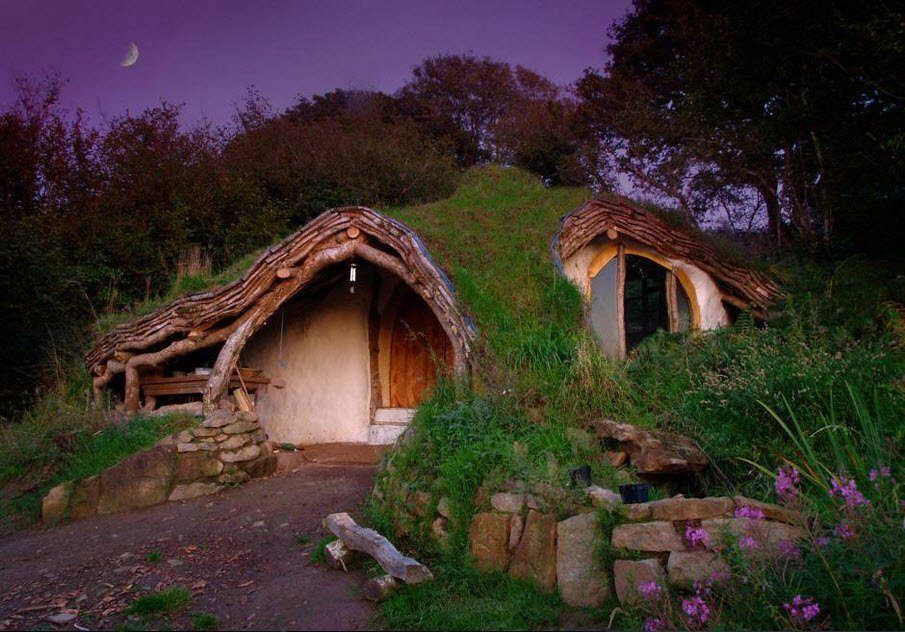 The architects of this house needed a whole year to do the project and to calculate all the nuances. And 7 days were enough to build it. The most effective element of the house is an elongated pool, floating in the air. 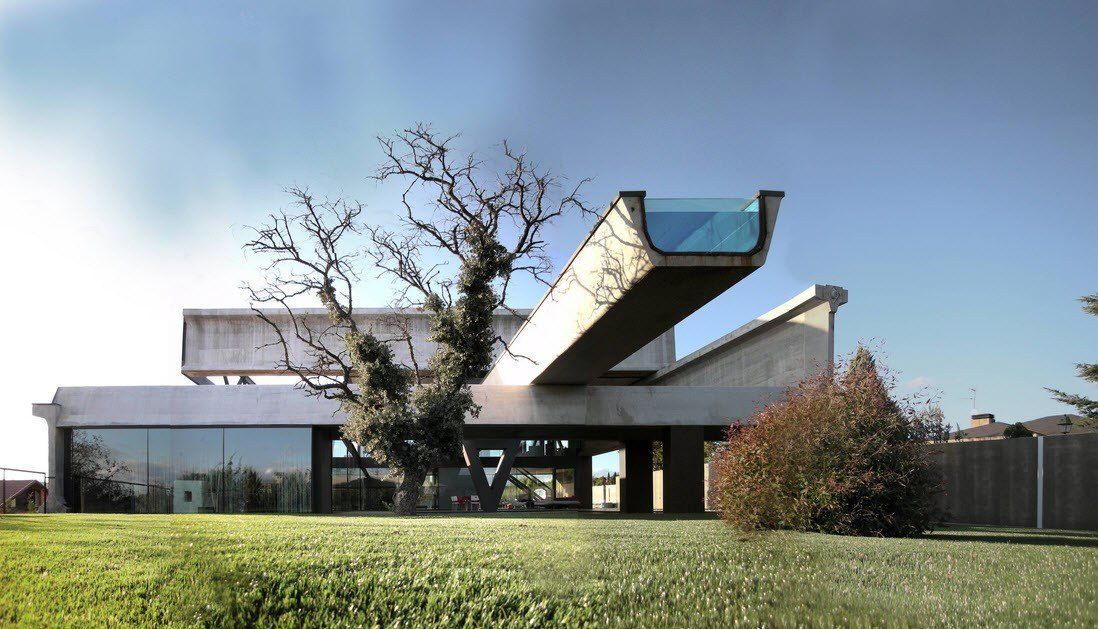 The Poetry of the Wave (Portland, USA)

A unique structure, moored at the Willamette river claims the title of the most amazing floating house. Its owners dreamed about housing with interesting forms outside and inside, without any partitions. The panoramic window overlooks the water, the rear facade and side walls are made solid. 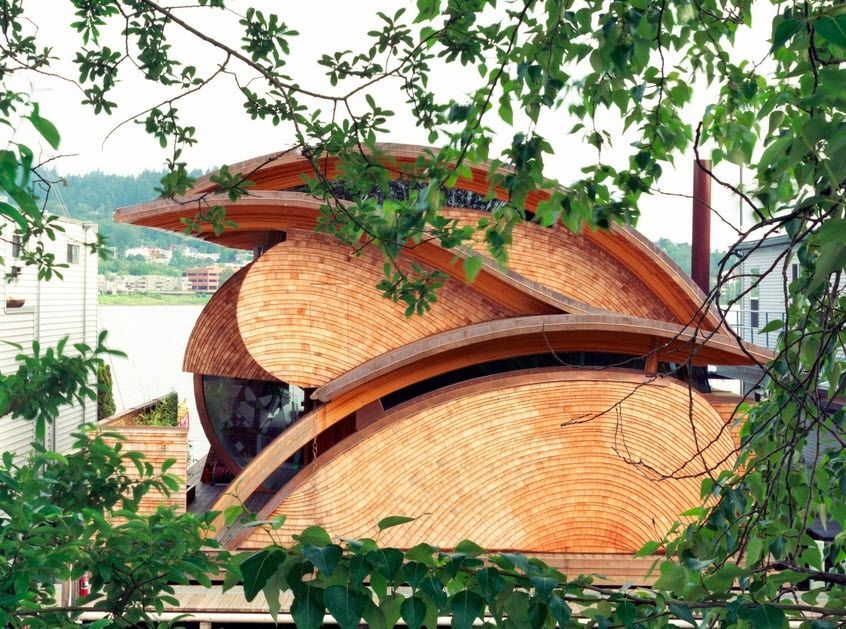 House in the Form of a Grain Bunker (Great Falls, USA)

And this is an interesting example of how the old bunker turned into a cute apartment house, thanks to the architect Nick Panche. The reservoir acquired a panoramic window, a balcony, two floors, and a small bridge connecting the house with the hill. 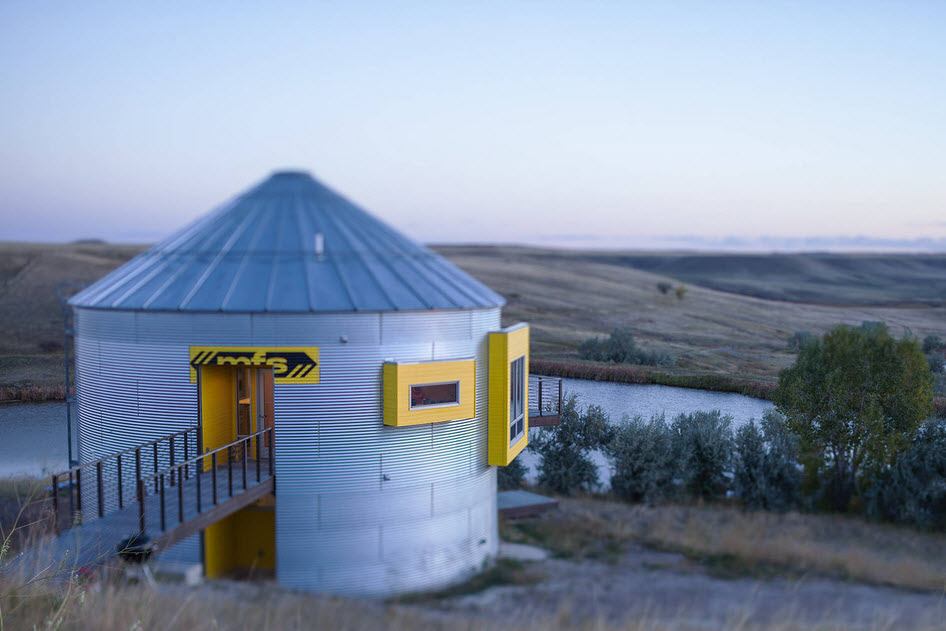 This project, inspired by the works of artists is truly unique. Cartoon architecture is part of the “Rezydent” shopping center.

The inverted house erected in 2017 with its internal filling completely corresponds to appearance. All the large and small items you have over your head. Going into such a house, it feels like you are walking on the ceiling.

Today in this amazing building, there is a museum of the house of stones. The house between the huge four boulders near the wind power station was built by architect Vitor Rodriguez back in 1974. 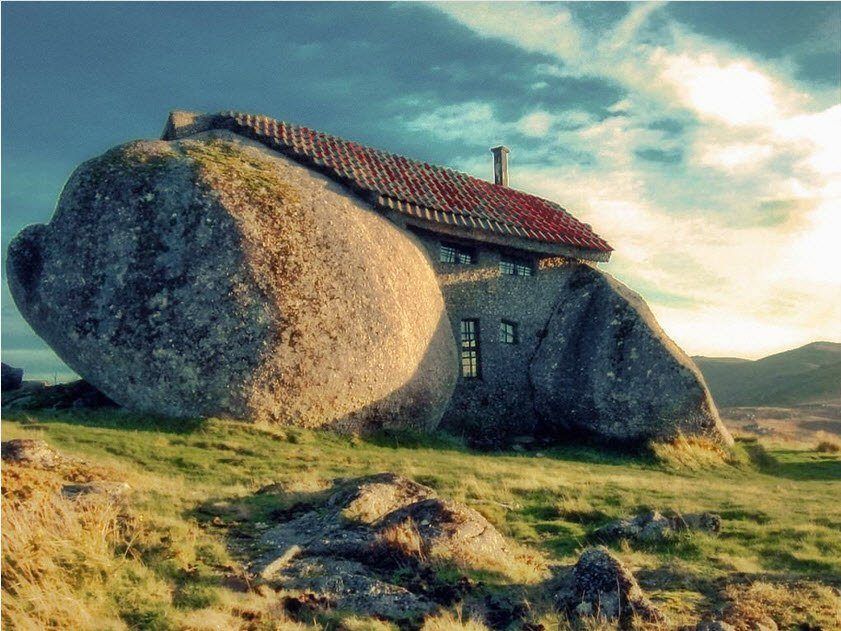 This original building was built by shoemaker M. Haines for his family and for advertising purposes. He owned a lot of shoe stores, and he wanted to attract even more attention to his business.

There are only three such soft houses in the world, and all of them are located near the Baltic coast of Germany. Their unusualness is that the facades and roofs are made of reeds. 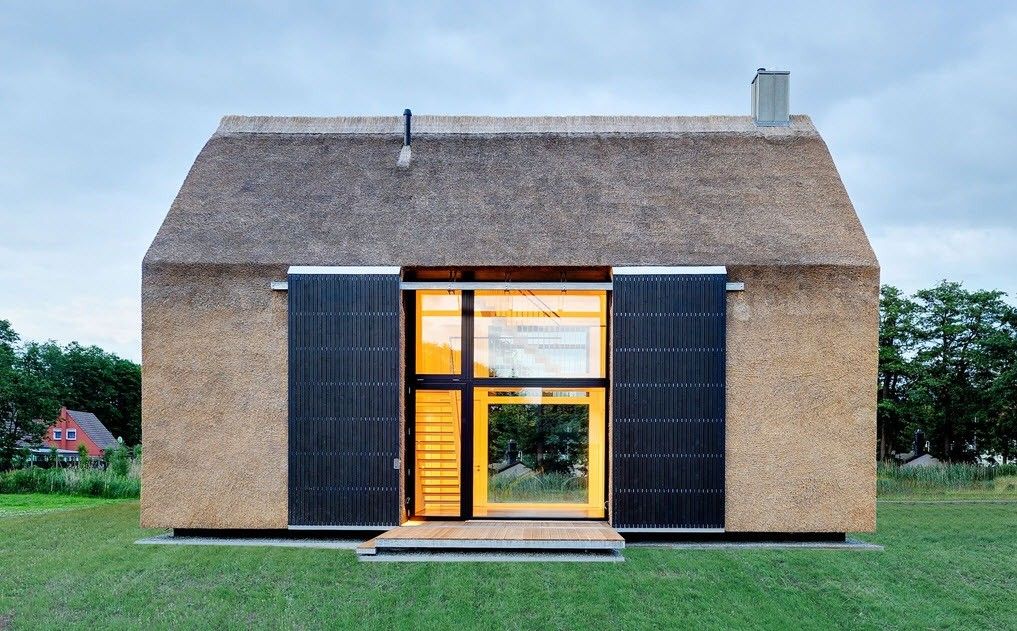 The originality of this building is simply mesmerizing. At night, the house is effectively illuminated, and passing it one wants to hear music, touching strings or keys.

This house-planet on wheels was originally created for the movement of the sheikh in the UAE desert. It includes four floors with four bedrooms and six bathrooms.

This amusing residential complex was built for the famous fashion designer Pierre Cardin. This quaint house has the same original furniture which fits perfectly into the overall concept.

This house is distinguished by its speaking facade. The idea to lay out the inscription HELLO belongs to the local artist during the expansion and reconstruction of the old building of the Victorian era. 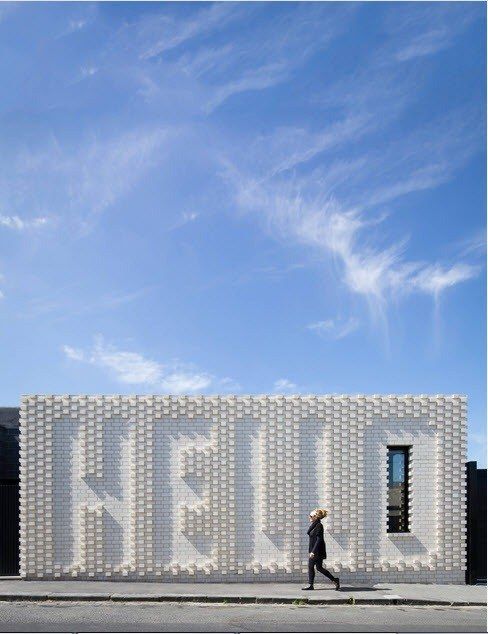 Succulents and other small plants grow from the 3D Printed Curiosities` tiles located in the backyard. It was designed by Emerging Objects, a local studio focused on the experimental use of 3D printing.

The Planter Tile system, consisting of hexagonal tiles from various materials was used on the front facade. The tile has six different patterns, four of which have protrusions with small holes, which makes it possible to maintain plant life. In the residential area of ​​Auckland, there are many tiny plants that are well suited to the climate of the area. The front façade was conceived as a box of exquisite sweets, incorporating a number of Planter Tile shapes and materials to create a living wall of succulents that thrive in the climate of California.

Another funny project in the form of 3 boxes located on each other has the goal not so much to impress but to become an excellent cozy place where you can hide from the populated quarter. 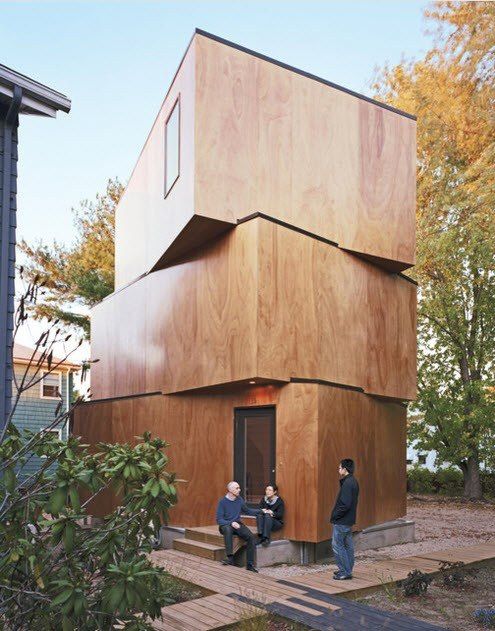 Above we’ve mentioned that the subject of unusual dwellings can be continued almost infinitely. You can find, for example, a DIY house made of bottles, cargo containers built house, original exteriors of the houses. Unusual architecture solutions also extend to house roofs. For example, you can find a grass roof project.

Should You Repair or Replace the Furnace? A Beginner’s Guide

It is essential to understand how your furnace works to know what to look for if a problem occurs. It is often difficult to…