The ceiling or our “fifth wall” also needs a cautious design approach and smart dressing up. Many countries and even cultures historically neglect the possibility to emphasize interior beauty through the decoration of the ceiling. But today’s requirements and expectations from modern apartments force designers to find exquisite ways of complementing the overall interior design by successful ceiling adorning. One of such options is a coffered ceiling. Known from the Georgian era and even earlier, used in the most advanced royal castles and residences, a coffered ceiling is a spectacular way to design large areas. However, we will try to find out whether it is the only method of using the coffered ceiling. Conservative relic or ageless Classics? What is it for modern apartments?

Coffered Ceiling in the Living Room

As we mentioned before, a coffered ceiling is a win-win solution for Classic design in the rooms. Especially if you use natural materials and adhere to the conformity of the overall design concept. Multiple cells (or trays) of this ceiling help to introduce play of color to the room and add volume by their structure. As well as other accent spots, the coffered ceiling is able to revive the atmosphere. It is also comfortable to use recesses for placing the spotlighting. 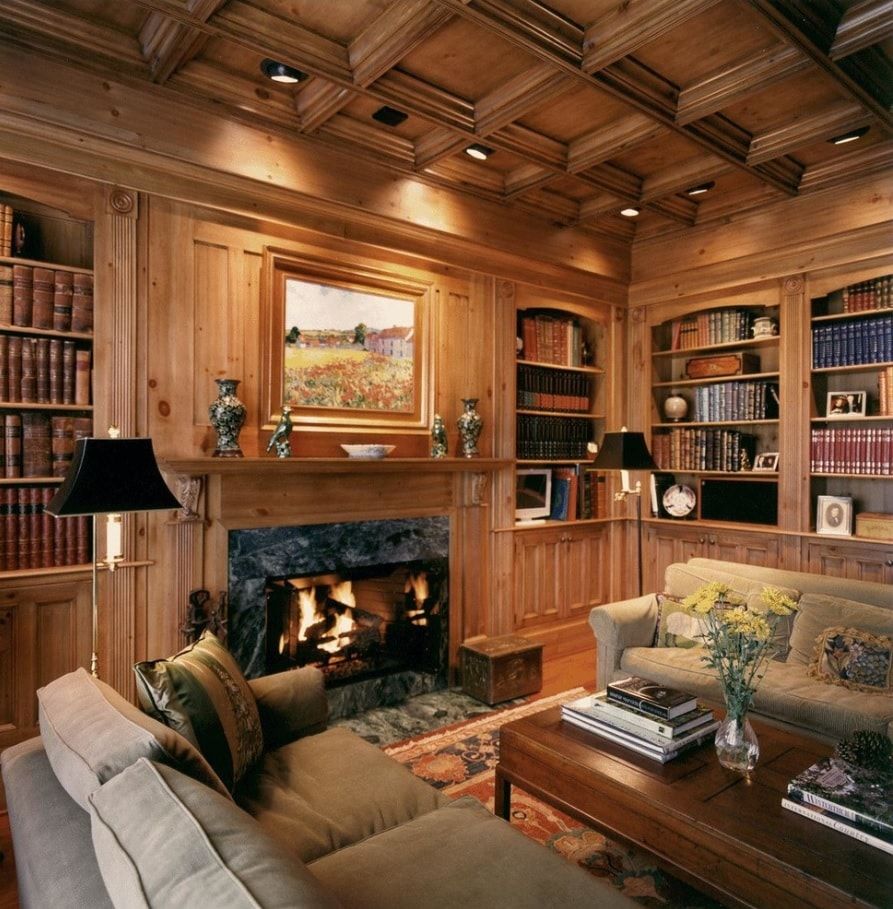 But what if you bear in mind some more contemporary design, for example, mid-century style. It is nothing easier to implement this idea at home. The ceiling will retain all the advantages of the accentual and structural elements.

Note. Don’t try to reduce the size of each tray of your ceiling trying to adopt it to the overall small size of the room. The rule of “the smaller room – the smaller ceiling cells” is not working. It is better to reduce the number of trays instead. Let it be a couple, but you’ll still have coffered ceiling and amazing variety of the interior. 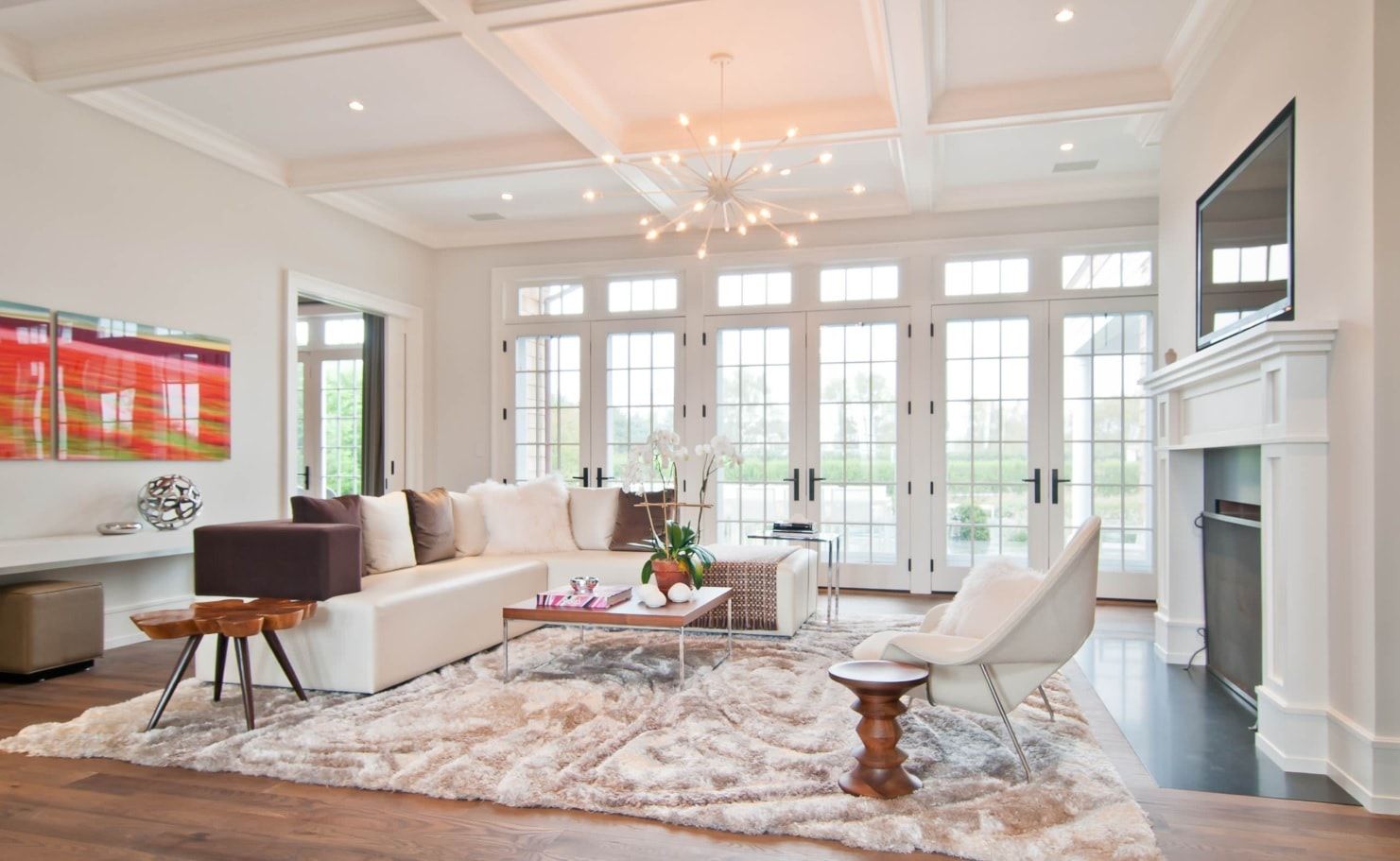 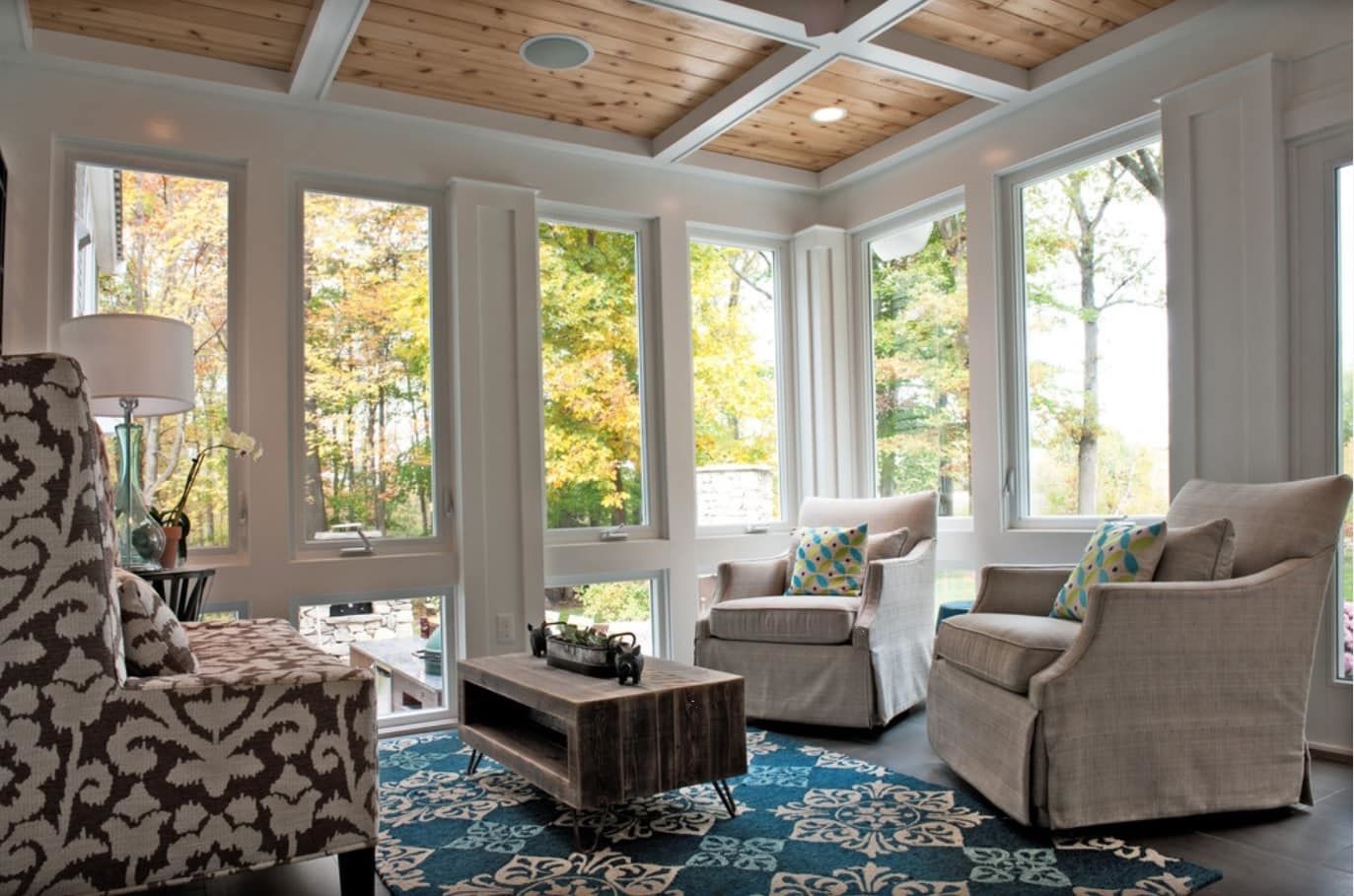 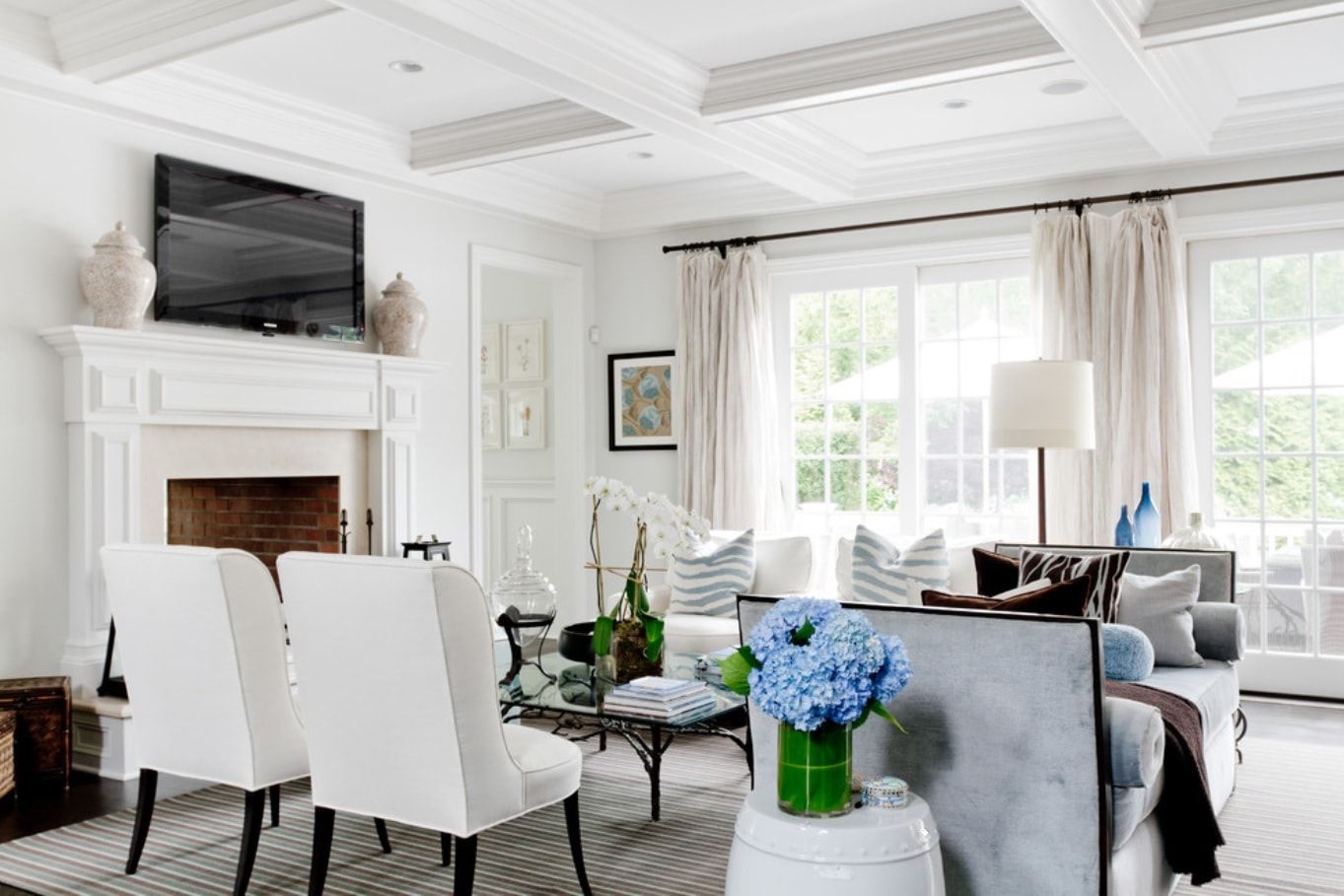 It is also true for Marine style or oceanside apartments with South romanticism. 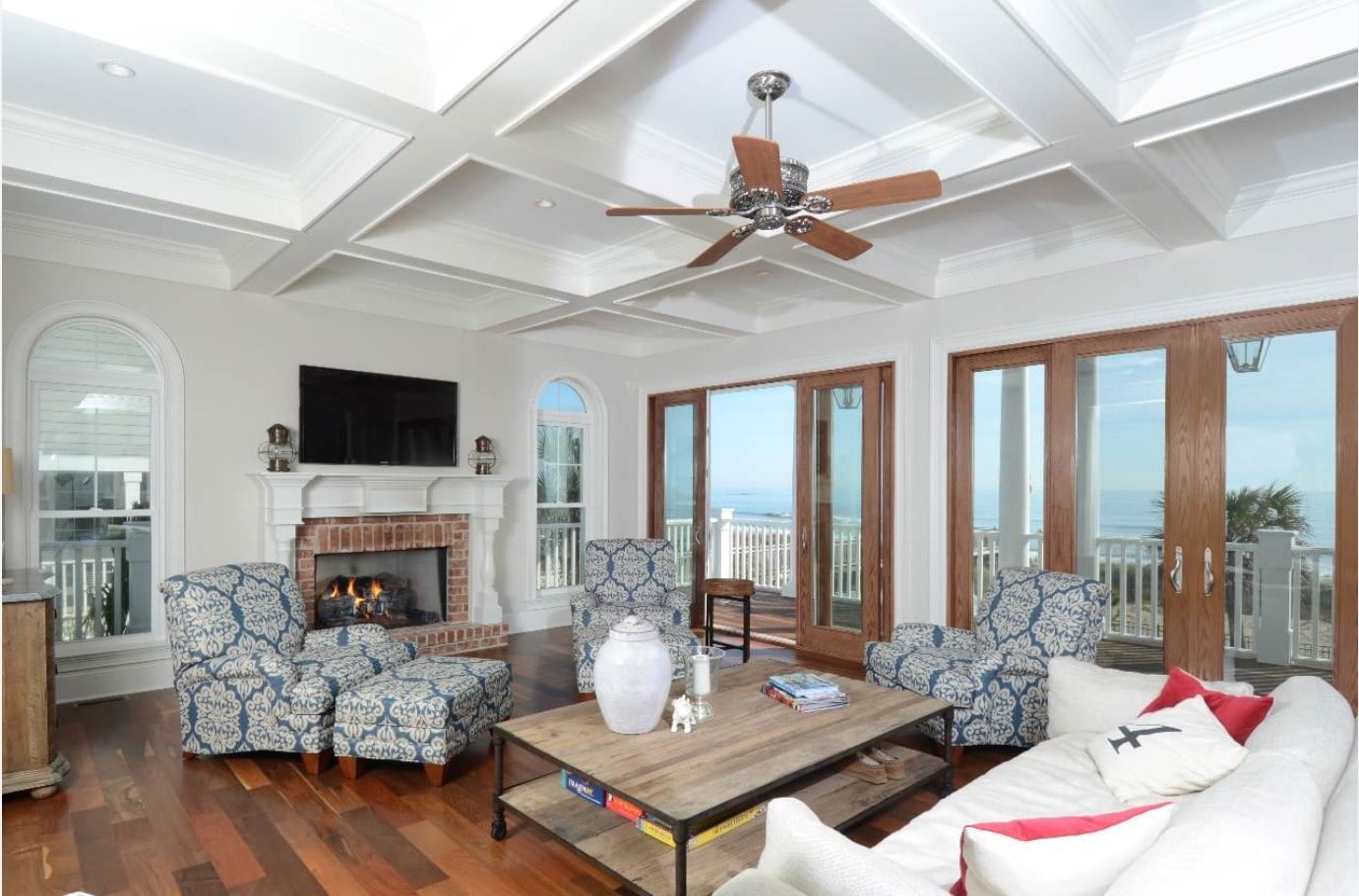 The coffered ceiling is also relevant to Eastern and even oriental styles. Open wooden ceiling beams are intrinsic for Chinese style. That’s how you can turn your ceiling into a coffered one. Indian tradition also grants experiments. 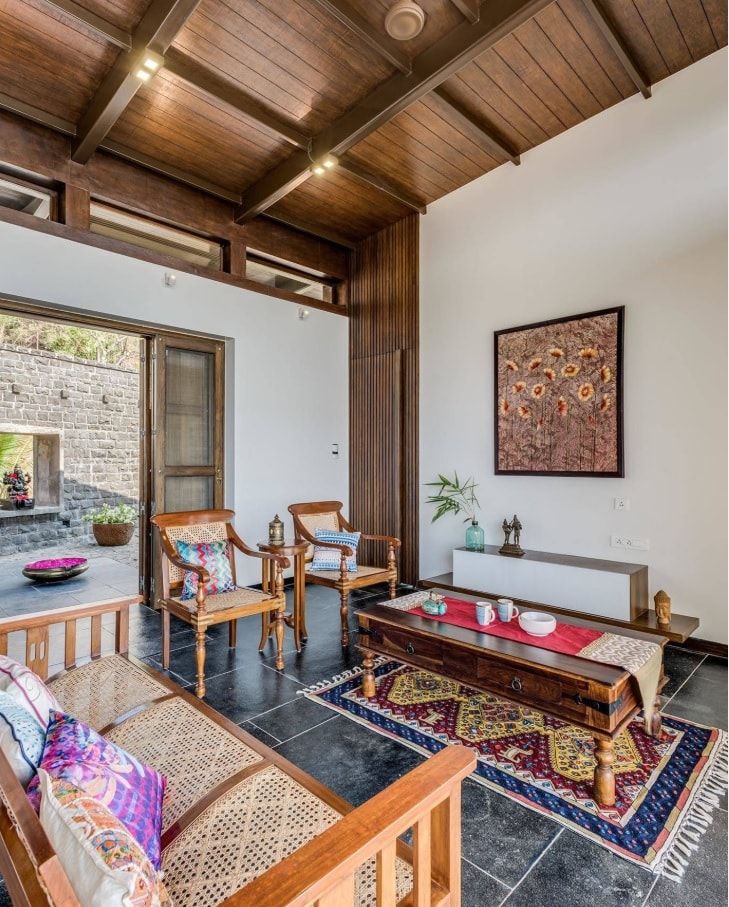 This room is rightfully considered as one of the most technically advanced and rich areas in the apartment. This means we will see some fresh design solutions regarding the coffered ceiling. It is impossible to dispense with Classic solutions only. And yes, coffered “grid” ceilings are pertinent for modern, technically advanced rooms as well. 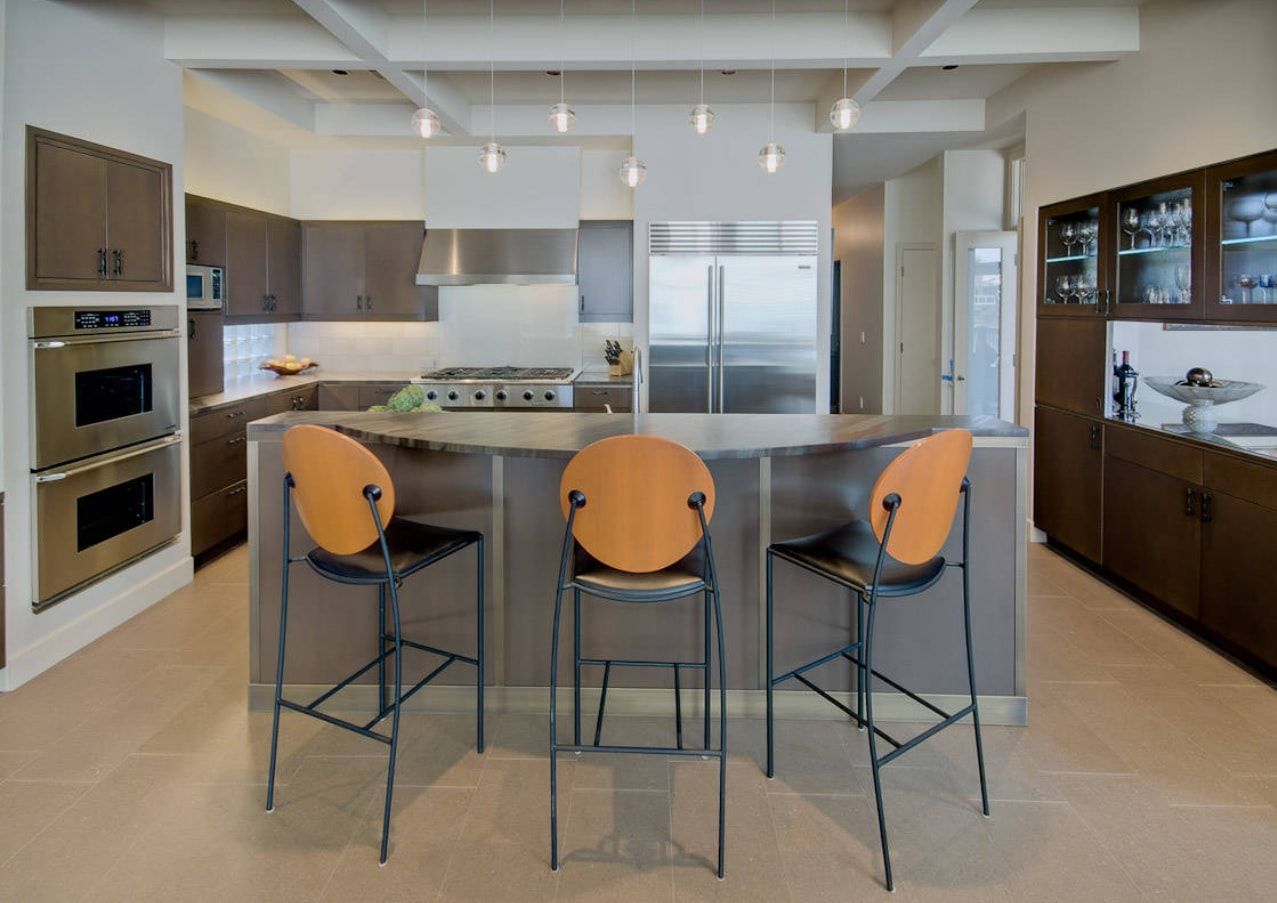 Do you remember what we said about the small cells of the coffered ceiling design? Yes, it can resemble a tray ceiling, but it is the interior element having structure. It is not a shallow mosaic. 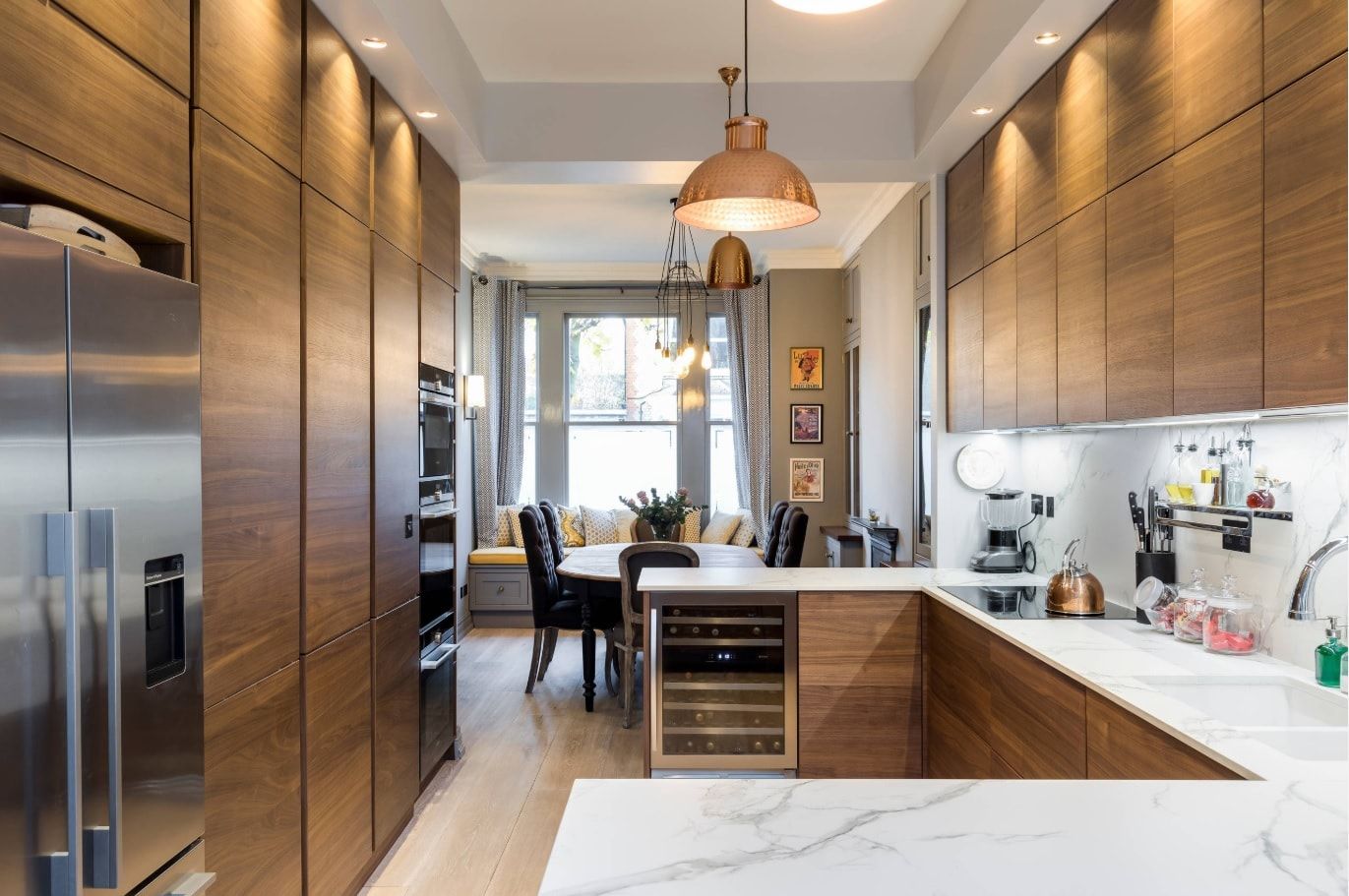 The resulting cells of the coffered ceiling successfully used for LED built-in organic lighting. It is a great way to provide general lighting in a large area. Use chandeliers for dedicated lighting. This combination will cover all your needs even in the darkest kitchens. 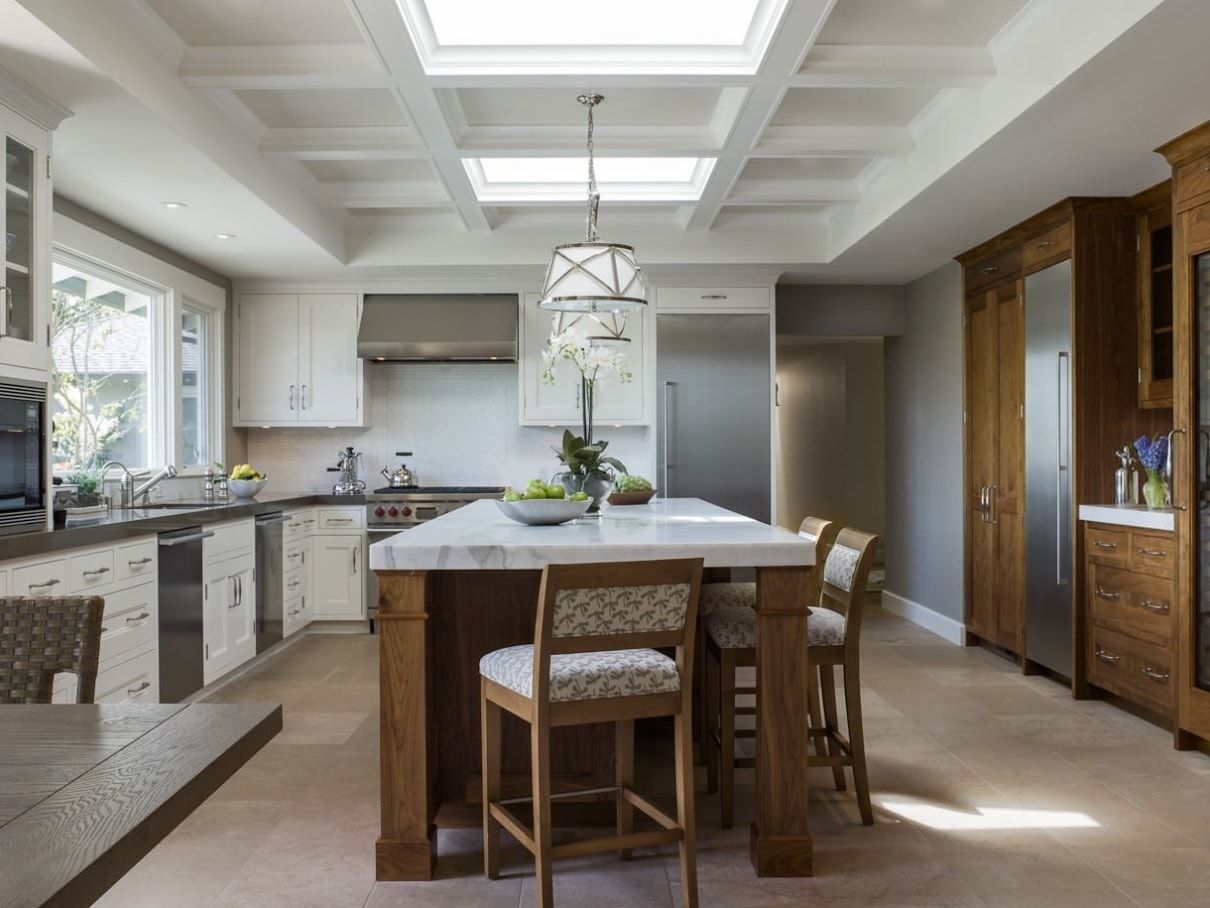 The room for meals is a logical continuation of the kitchen or living room. Its stylistic filling usually “inherits” the decoration of other rooms. That’s why it usually has a predictable color theme and design solutions. But pay particular attention to accentual black furniture sets in white decorated rooms. The ceiling is not the element to experiment with. 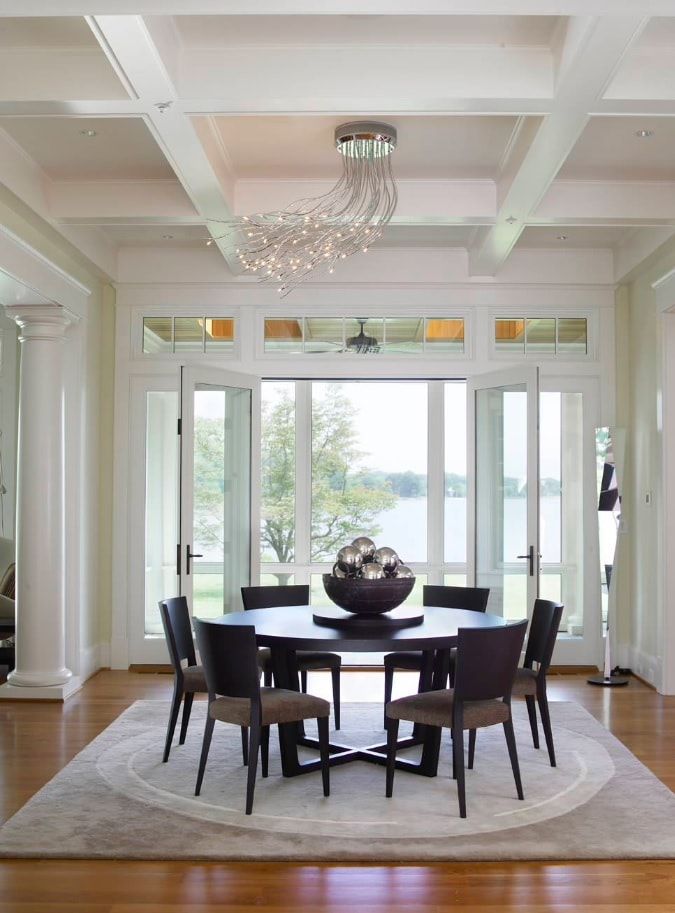 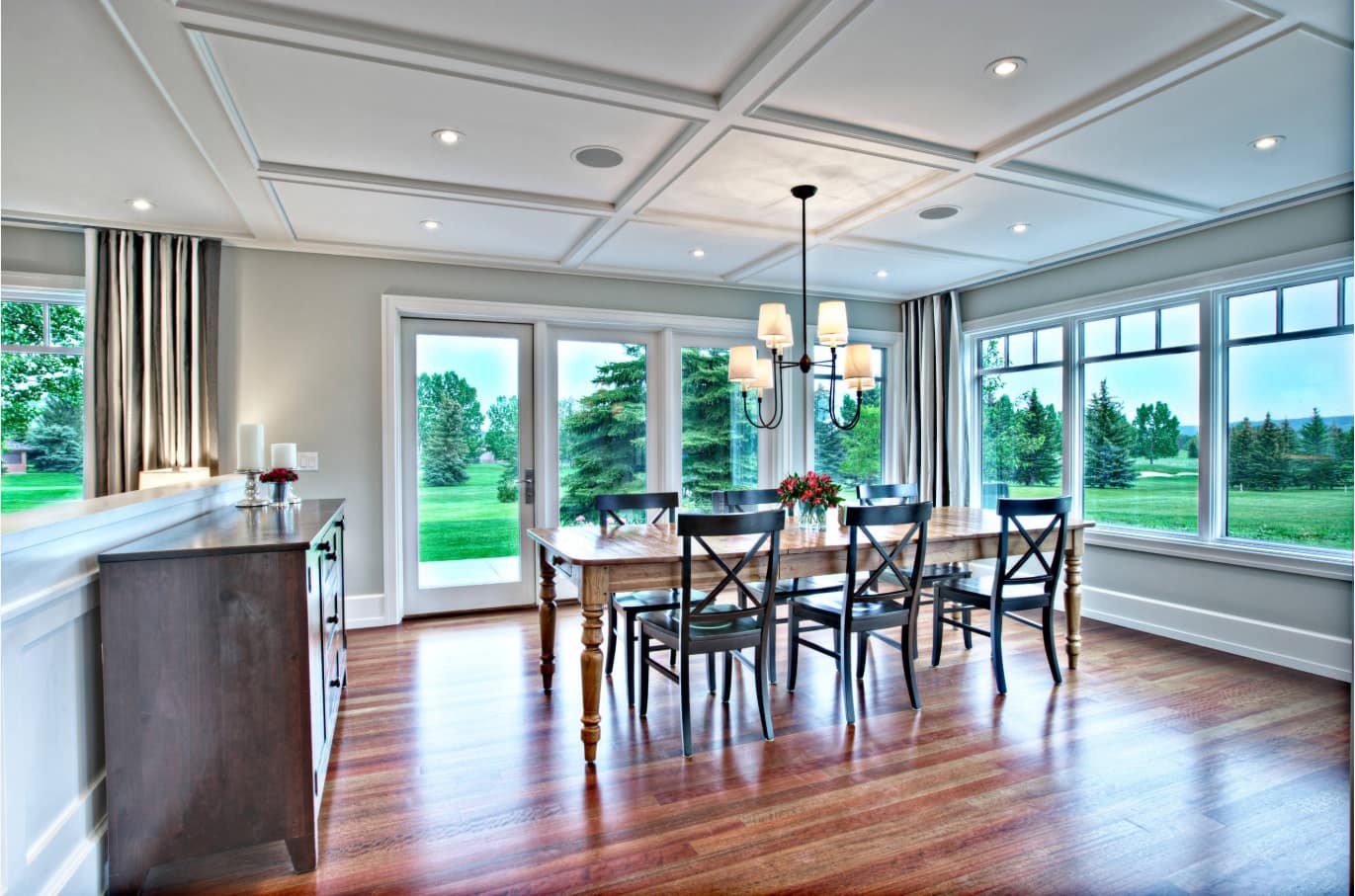 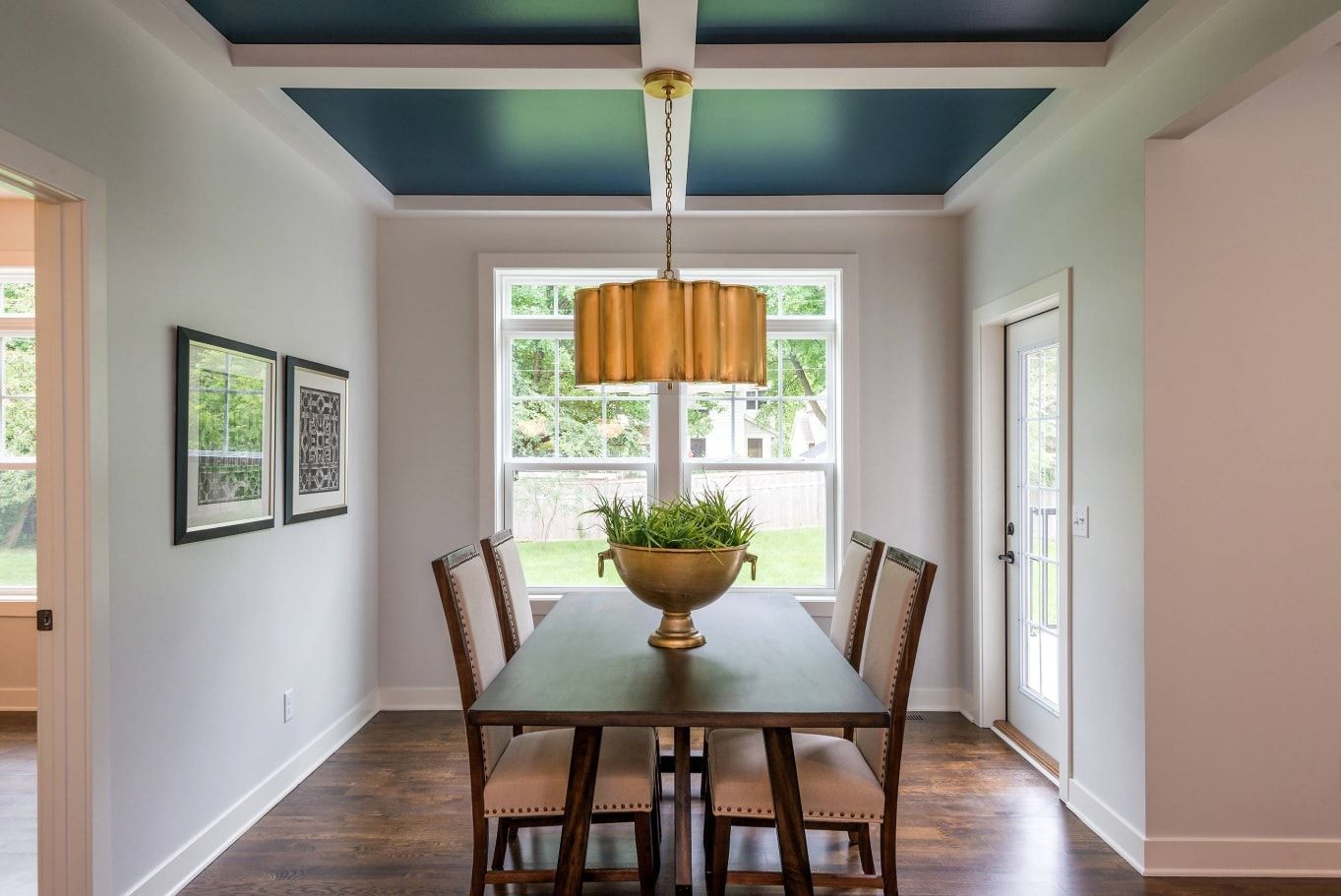 Mosaic is not relevant for restrained Classic interior. But if you have the Mediterranean or Spanish, Egyptian style in your apartment, it becomes more than eligible. You can drastically change the perception of the whole space just by adding such colorful stained-glass windows at the ceiling. 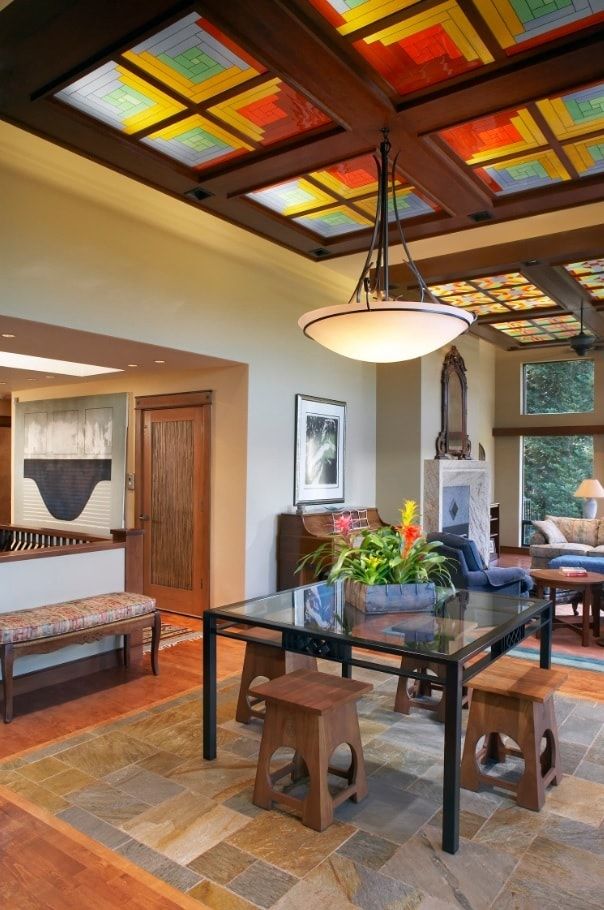 We also mentioned that such a type of ceiling is most welcomed when it comes to large areas. So, we decided to attribute the open layout apartments to individual paragraphs. Indeed, the coffered ceiling proves to be a separate participant of the design, which is able to not only complement space but also to attract glances. If your cottage or apartment has an open space design and you are about to implement a Classic design there, a coffered ceiling is the first solution we would recommend. 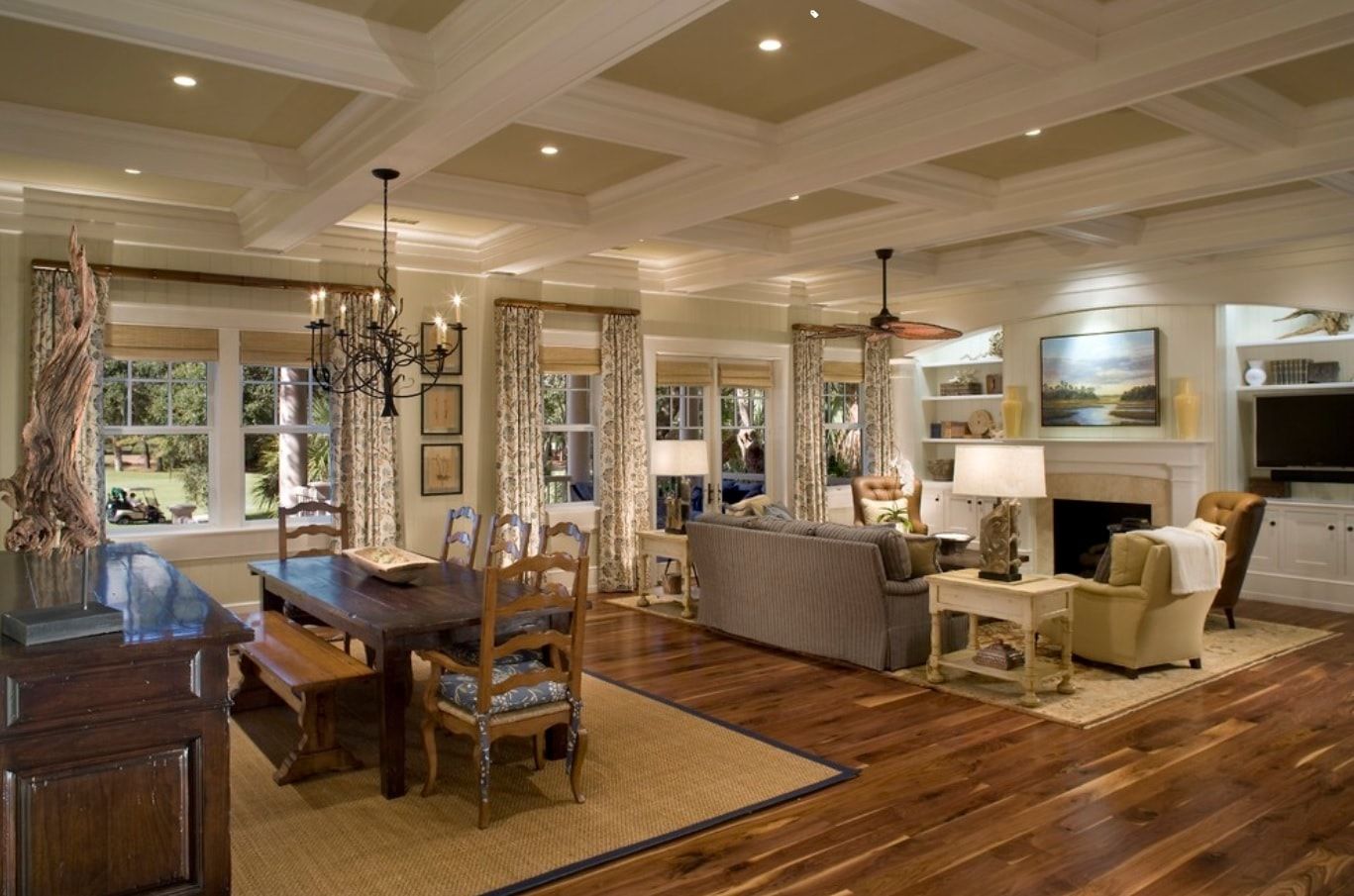 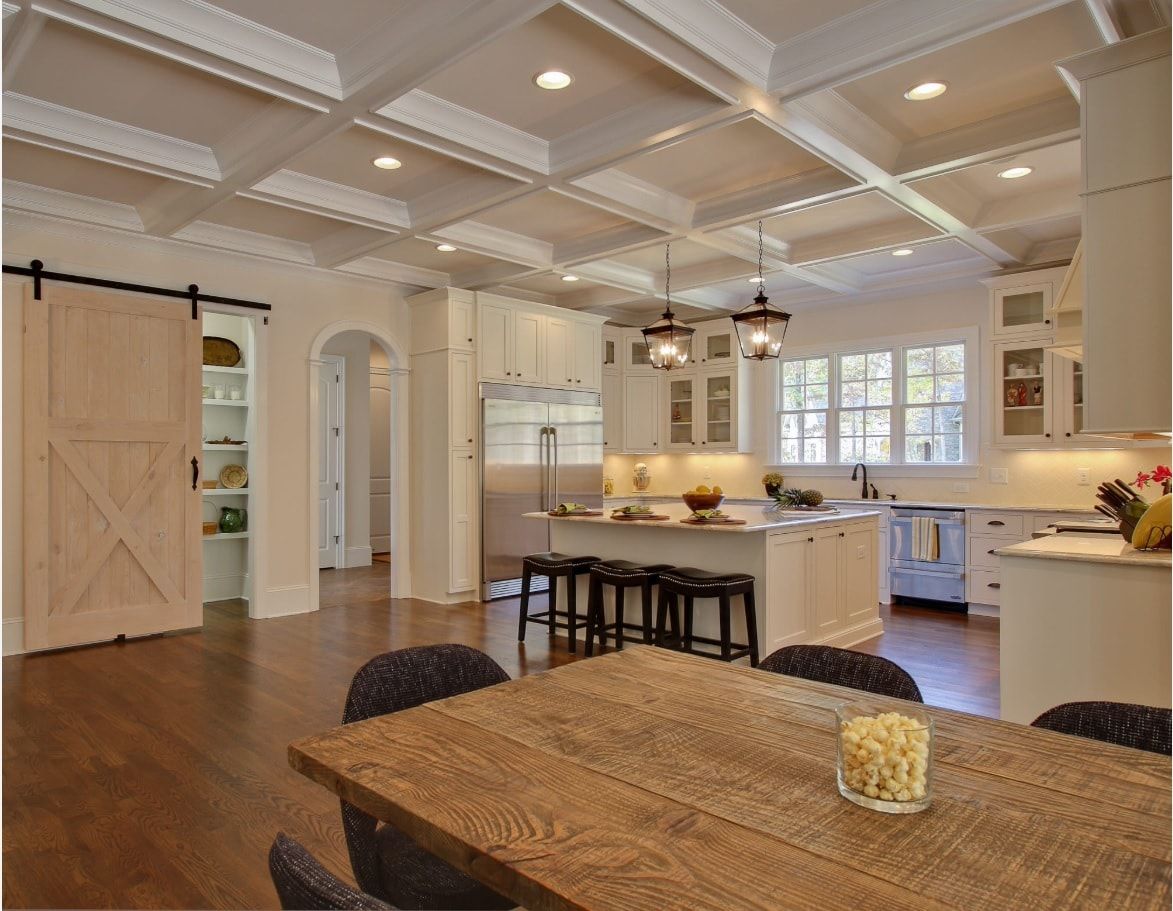 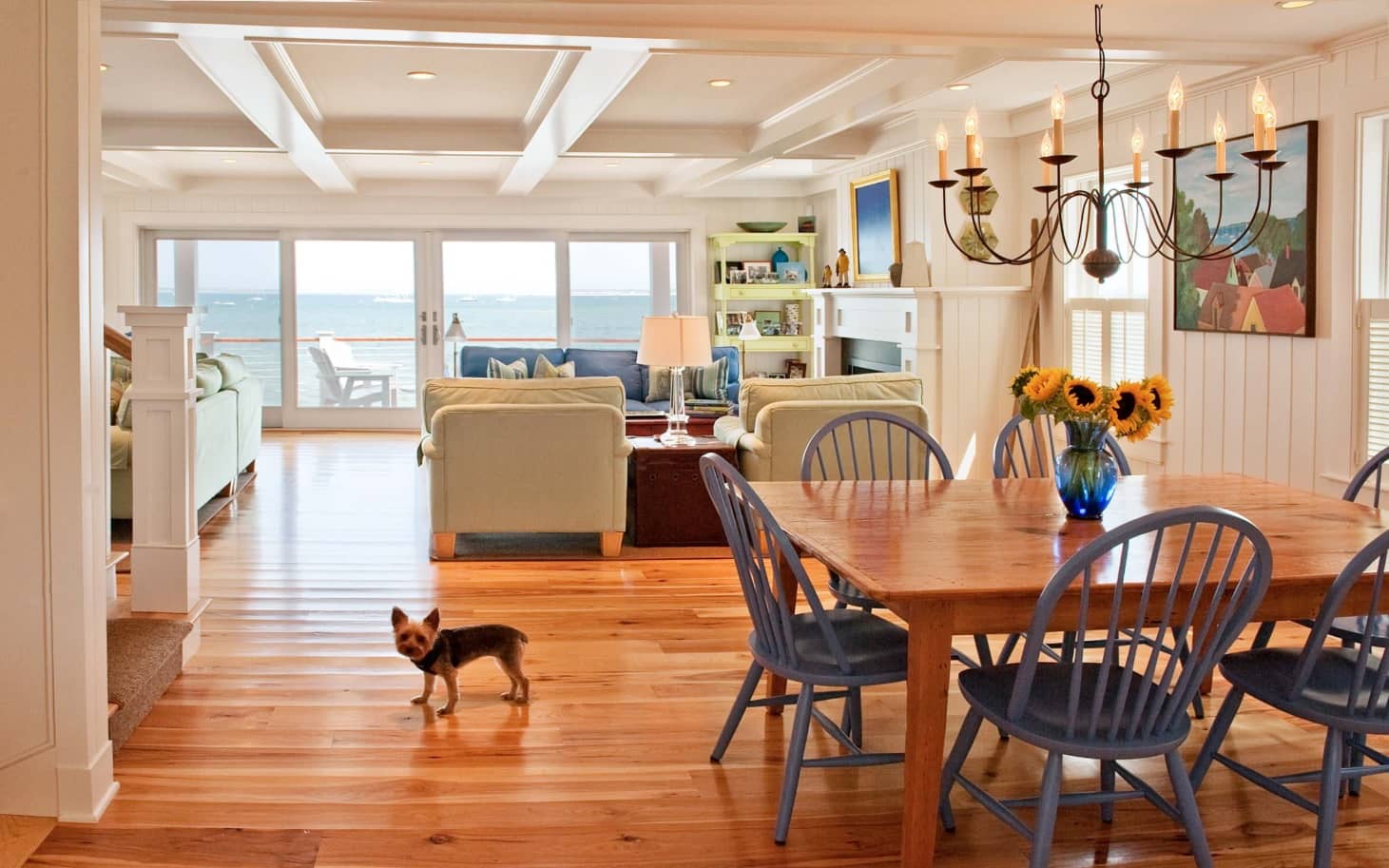 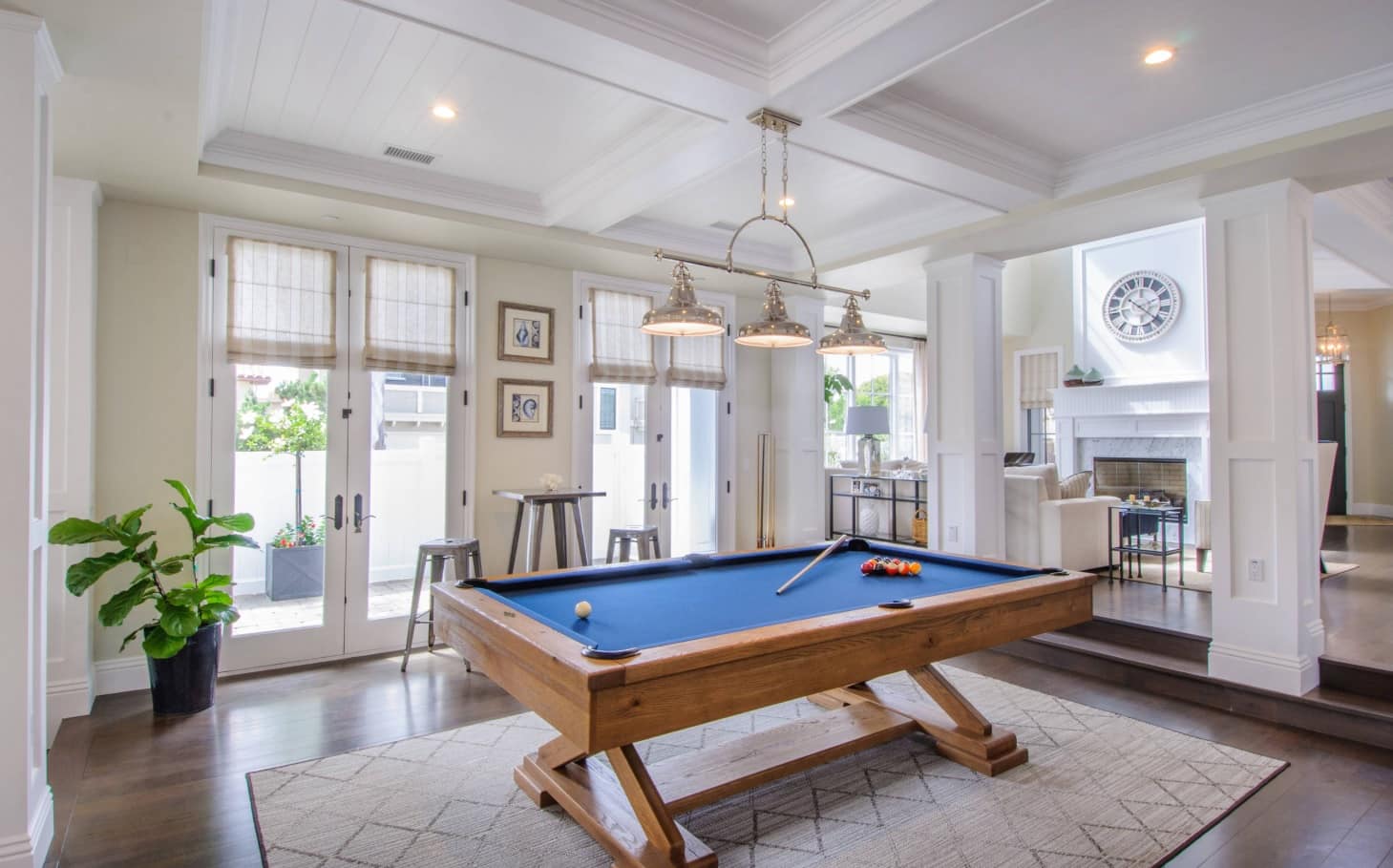 How to Pick the Best Colours for Your Kitchen

There is no doubt that the kitchen is the heart of the home. It is where you and your family gather to cook or…