Modern house facade design of any building is its architectural apparel, outer shell. And on what it will be, depends on the first impression which people will have about the house. Of course, the chosen way of the house exterior styling reflects the taste preferences, favorite color palette and even lifestyle of its owners. But, while planning appearance of the facade at home, it is important to remember not only the visual attractiveness of finishing materials, but also functional component. Trim should protect from moisture and be resistant to corrosion, withstand frost and easy stand active solar rays, to warm the building and to be non-toxic, do not harm the health of homeowners and the environment. 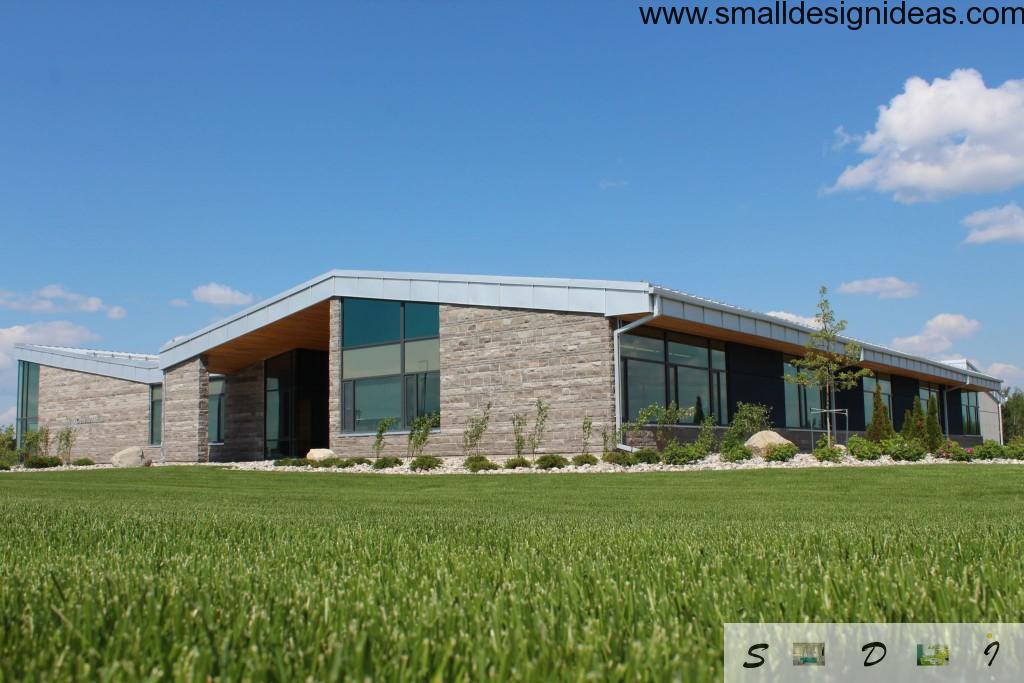 Choosing a style for the exterior of the building, it is important to consider several components: the climate and the natural environment, territorial specificity of home location, appearance of neighboring buildings and your desire to merge with a common environment, or stand out from the mass of private homes instead. 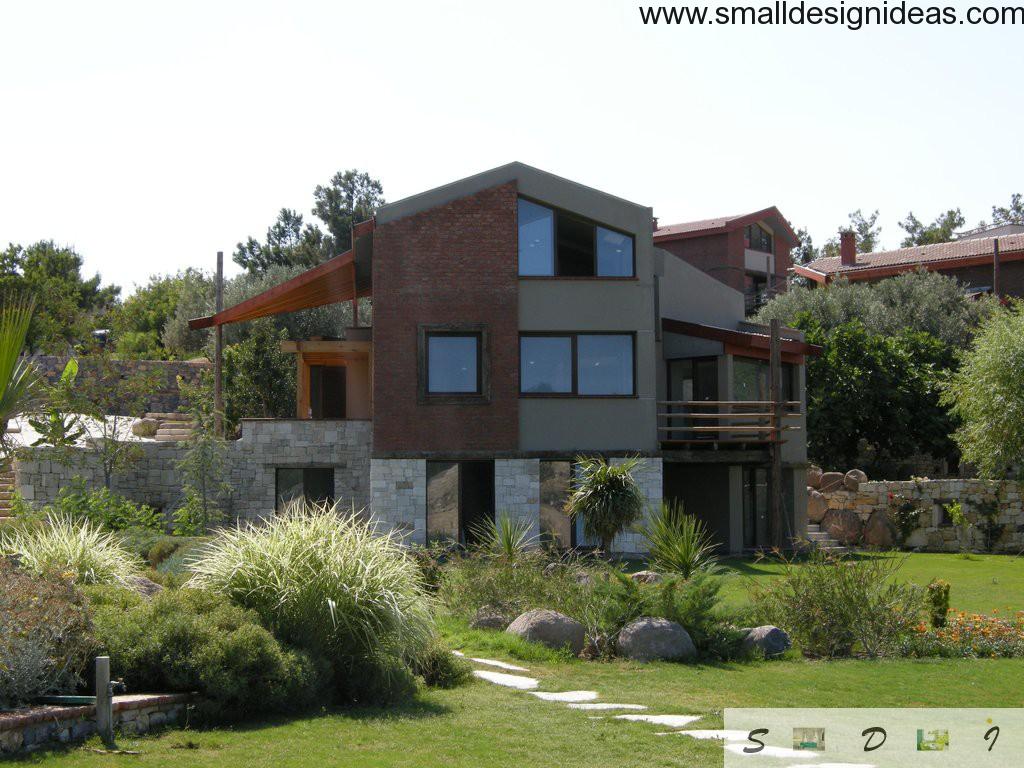 Determine the style of the facade, it should be remembered that the design is a flight of fantasy and any canons are alien to it, so most of the houses made out today have in their design and methods of finishing a mixture of at least two stylistic directions, and sometimes more.

Country style in the design of the facades of private houses

Peculiar properties of national culture, art and territorial locations are reflected in the way of construction and finishing of architectural forms in different countries. Cosmopolitanism in architecture led to the fact that there are no restrictions on the use of certain elements of national identity outside the state. You can easily find the house in Russia designed in the style of German or French traditions. 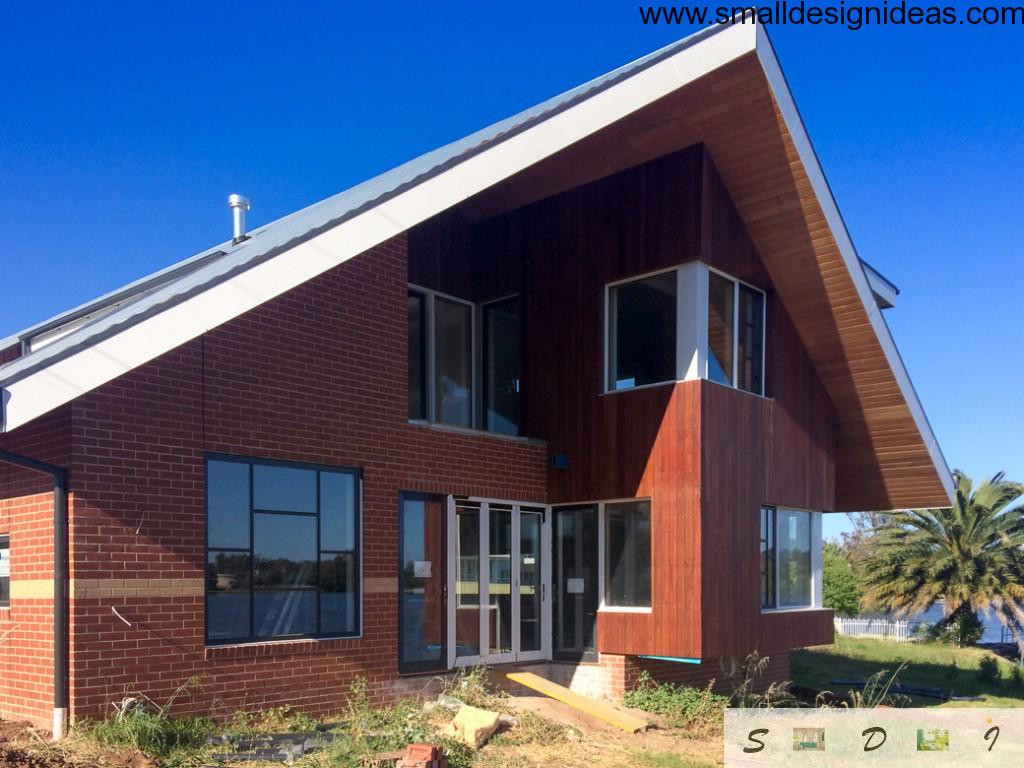 For example, this modern private house combines the presence of classical, Middle Eastern and German half-timbered style. This is indicated not only the design of the building, but a way of finishing. To add to the already finished building some timbered features, its enough to apply dark wooden beams placed on a light background in surface trimming. This type of surface treatment is economical and fast enough to perform, but you must be prepared for the fact that every 15-17 years these beams need to be changed.

Country style characterized by the use of natural materials – stone and wood. Even if the stone is artificial. Thanks to modern technology, it is virtually impossible to distinguish such material from natural one visually. This style of decoration of the facade will be very helpful for houses located outside the city, near forests or mountains. 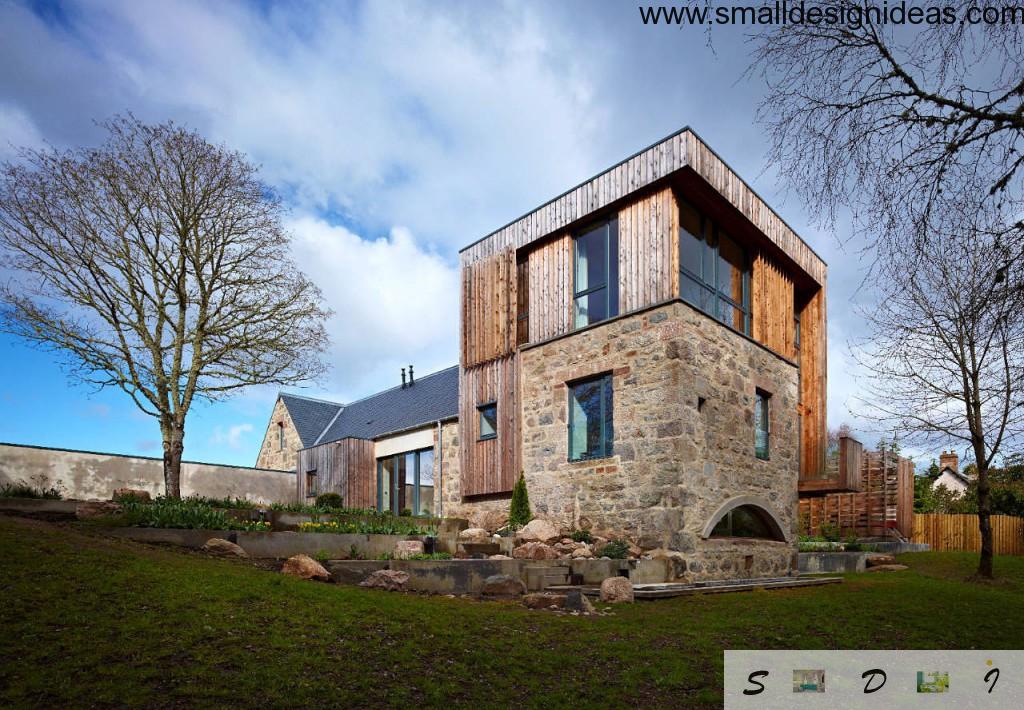 As you know, the style of Provence is the part of the country-style trend, which has French roots. In contrast to the “pure” country, which is dominated by warm shades, Provence tends to be colder and to use bright colors. A white color can be called a favorite of this style. 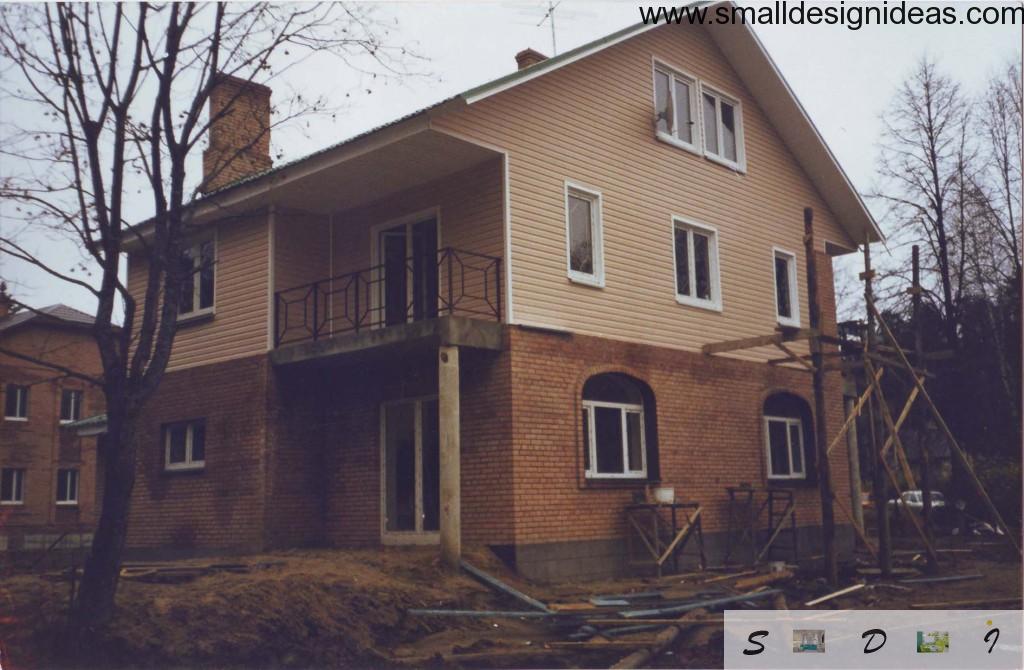 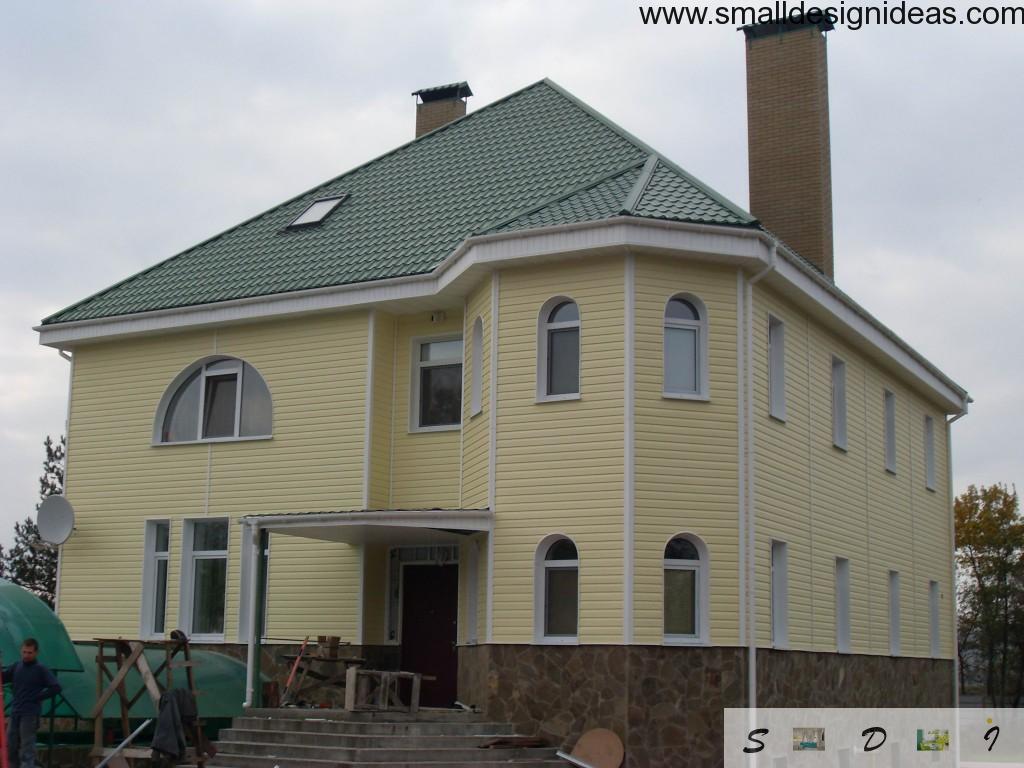 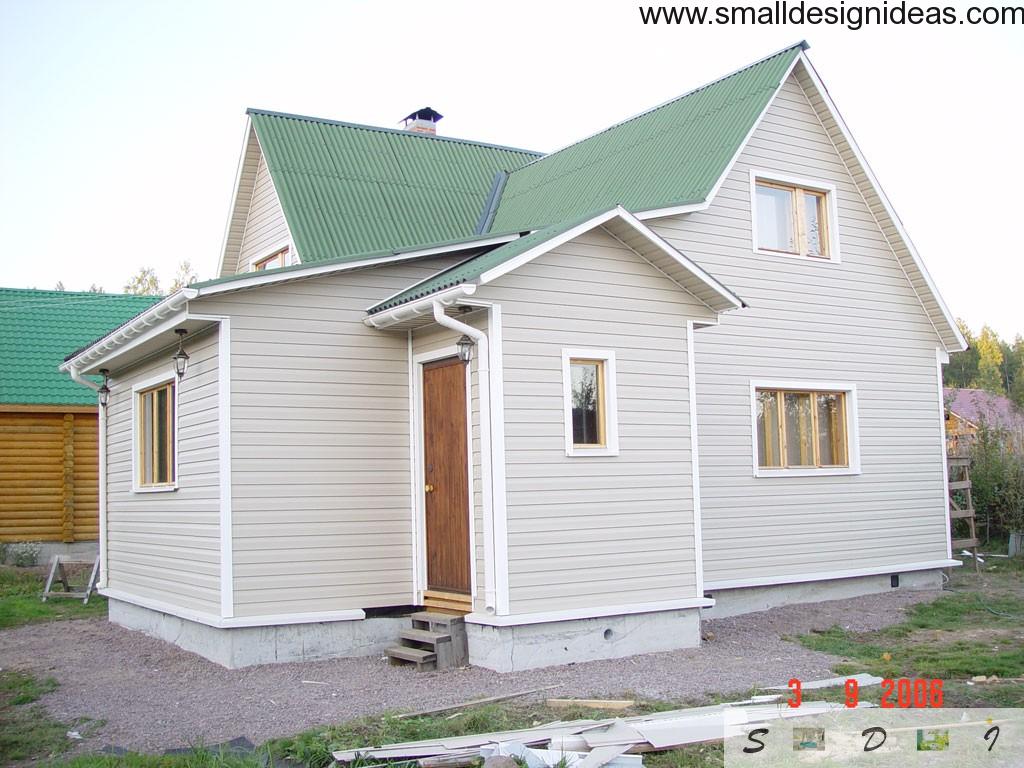 Produce a complete furnishing of the house in Provence style can be difficult for economic reasons. It may take a a lot of money to finish all the walls of stone, even artificial. Therefore, in the design of the facades of private houses, designers often resort to mixing of modern materials, such as sandwich panels or siding, leaving only a basement of the building to the costly stone facing. 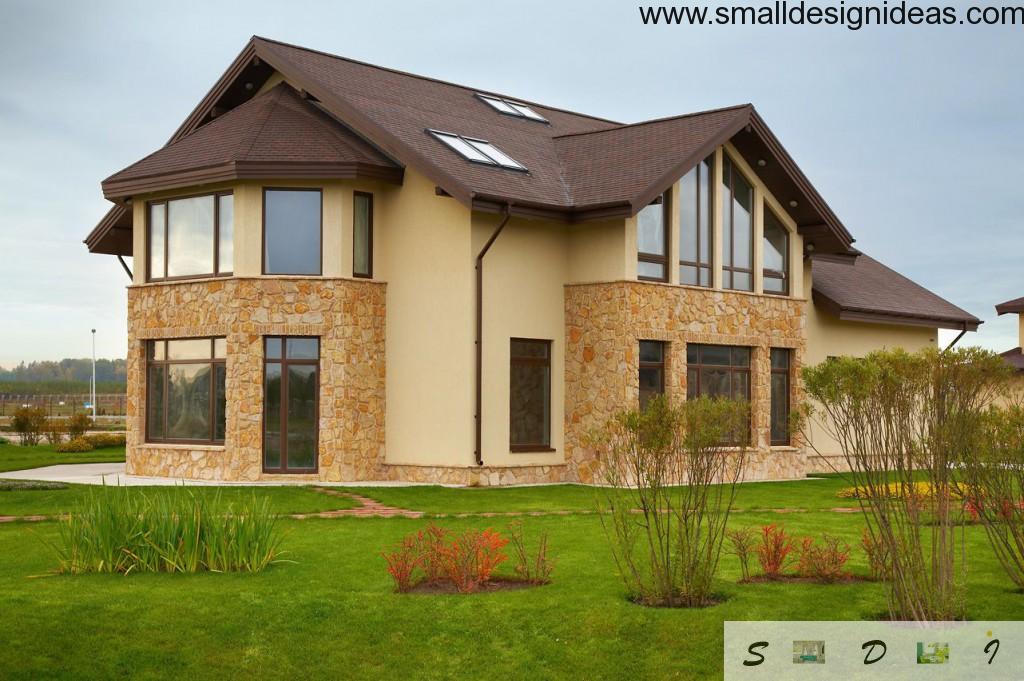 Warm shades of stone cladding of the building is incredibly harmoniously look at the background of nature, perfectly fitting into the local landscape. 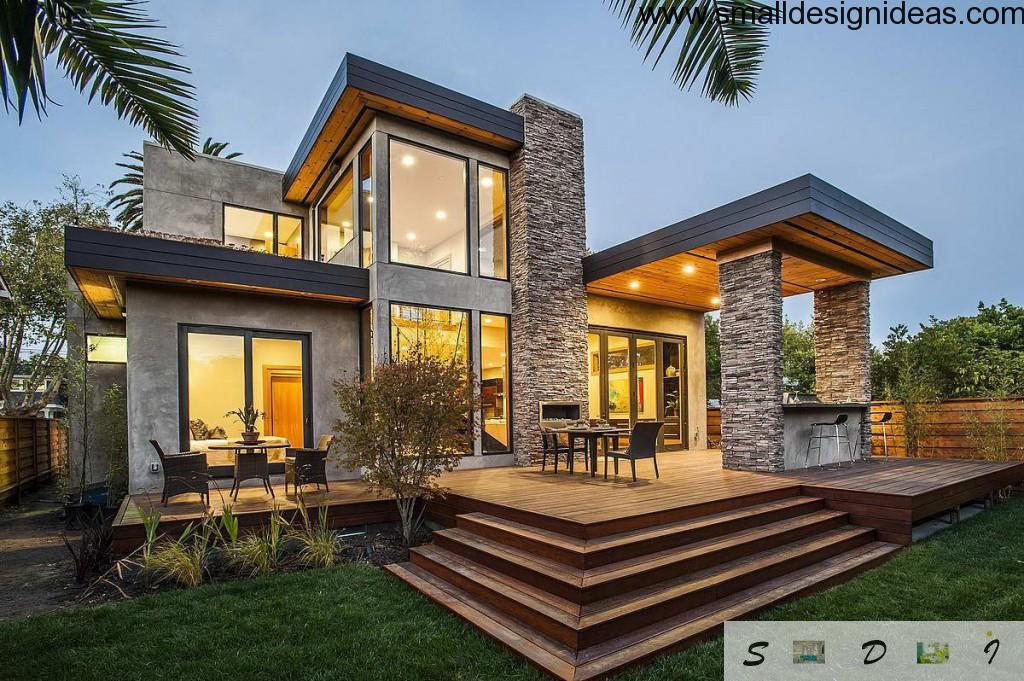 Sometimes country style combines with the direction of high-tech in the design, despite the almost diametrical principles of both styles. Modern technology, simplicity and austerity, minimalism and clean lines, meet with the smoothness and warmth of natural materials. 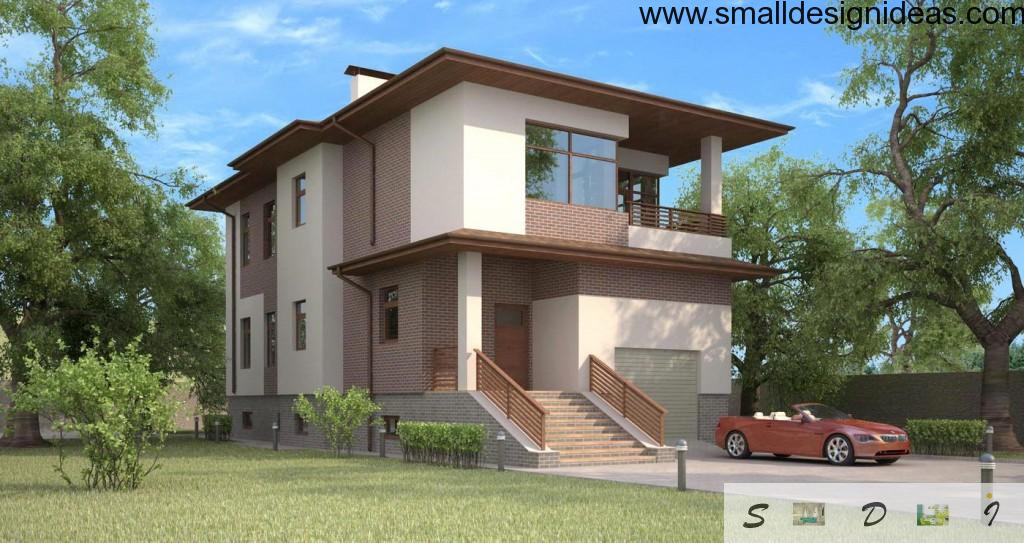 French “country” has always been characterized by white windows, divided into several sections and the use of bright colors for decoration of the building fronts and a small balconies. 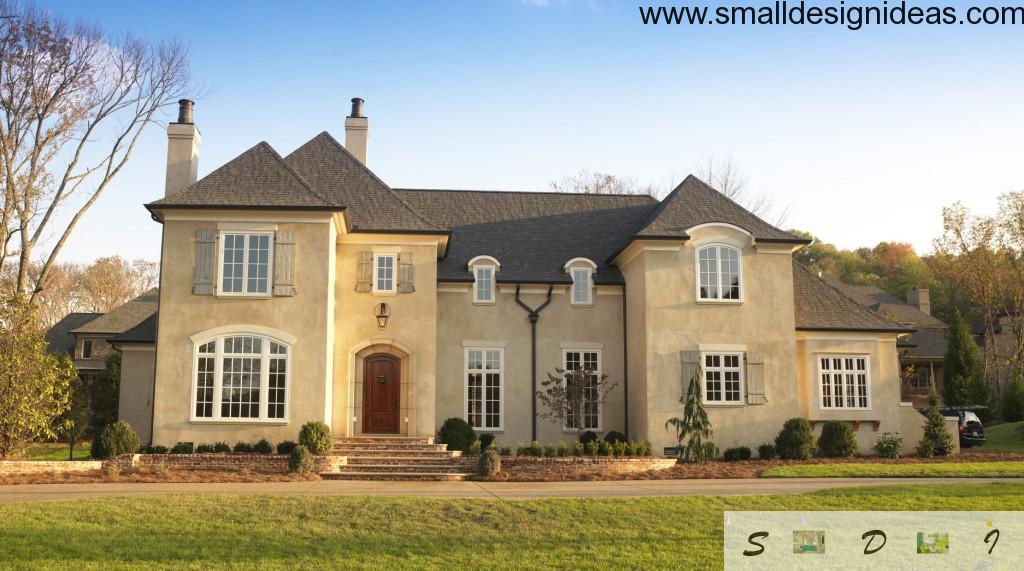 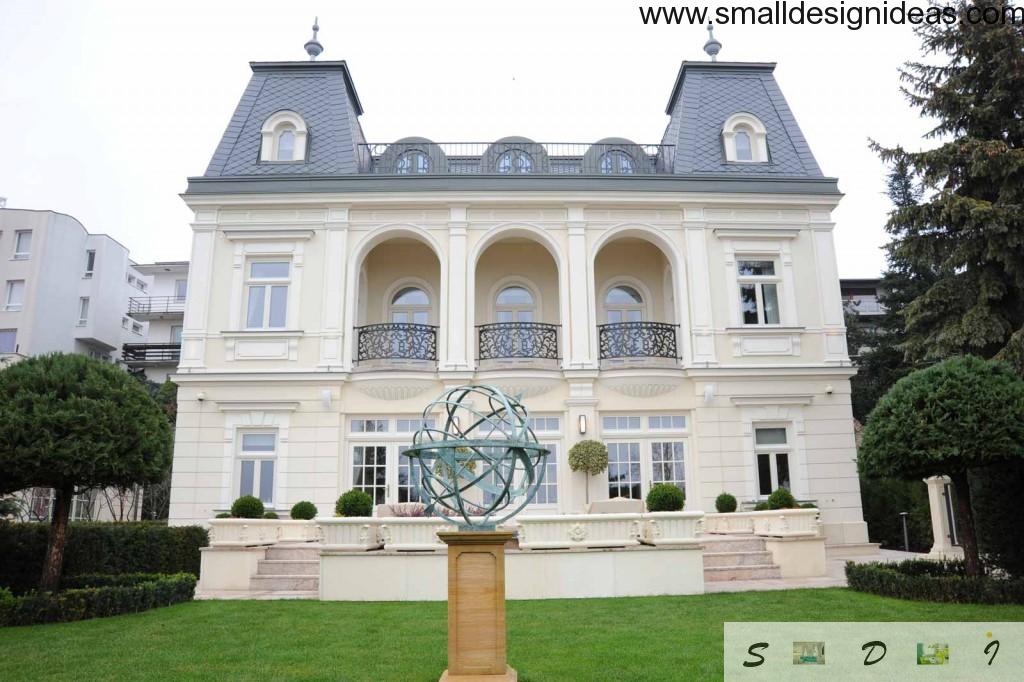 In modern homes it is often difficult to determine the appearance of the building belonging to any style, perhaps due to the fact that during the design phase of stylistic directions anyone hardly thinks about it, and the question of choice arises already at the stage of surface finishing of the facade. 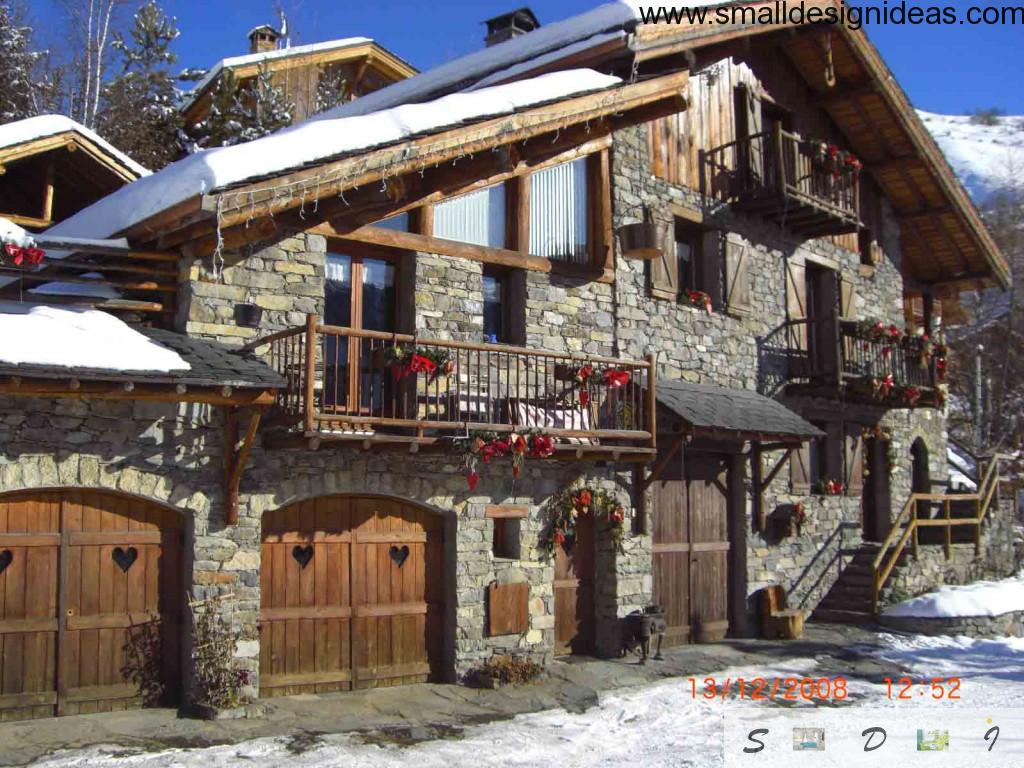 Chalet style as a way of organizing the facades of buildings, is very common at the Western Europe, particularly in France and the Alps. Initially, it emerged as a housing option for shepherds living in the foothills. At present, the style has undergone a lot of changes and acquired the status of a luxury variant of the facade arrangement in the private home ownership. The use of wood and stone for surface finishing brings style to another level of financial expenses. This style is more suitable for a out-of-town solitude, chalet-style house in the urban jungle is a rarity. 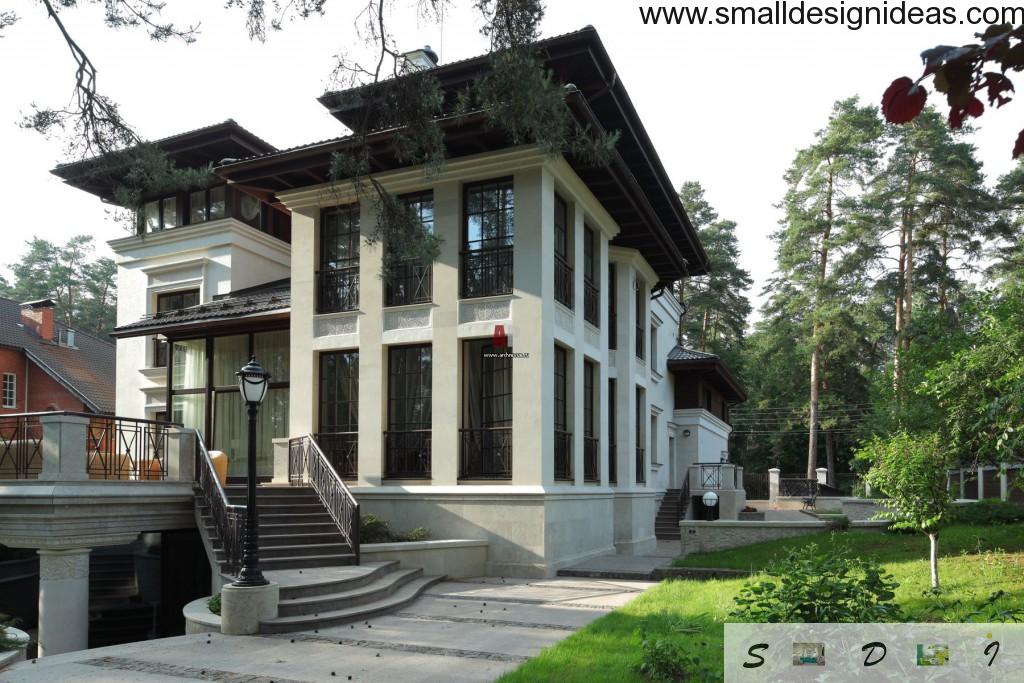 This country style has oriental roots. The roof structure and simplicity of the total indicates Oriental motifs, which are also reflected in the landscape design of the private courtyard. 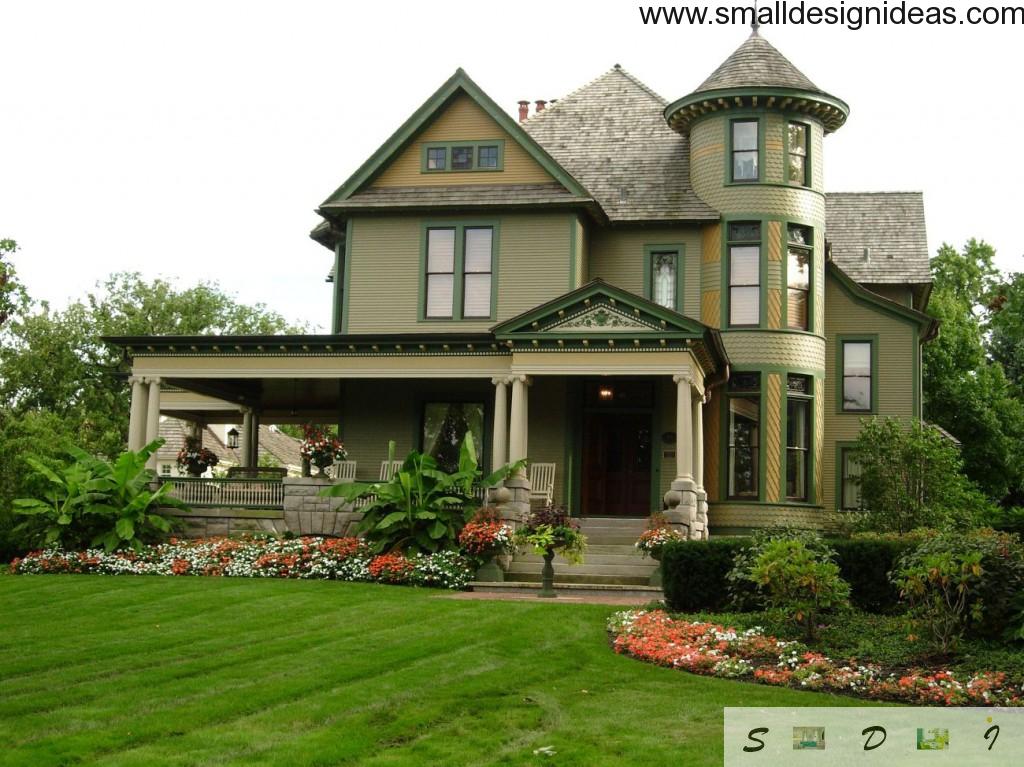 And this private house very close to modernism in its style.  A little bit shocking style, for those who are not afraid to be in the limelight. Flight of fancy, freedom of thought, no restrictions – that’s the credo of this style.

Minimalism and industrialization: the main features of modern private houses

If we talk about private households located within the city or close to it, the recent trend is industrialization of buildings` exterior. Minimalist style that combines elements of the current high-tech has become increasingly popular among homeowners and designers. 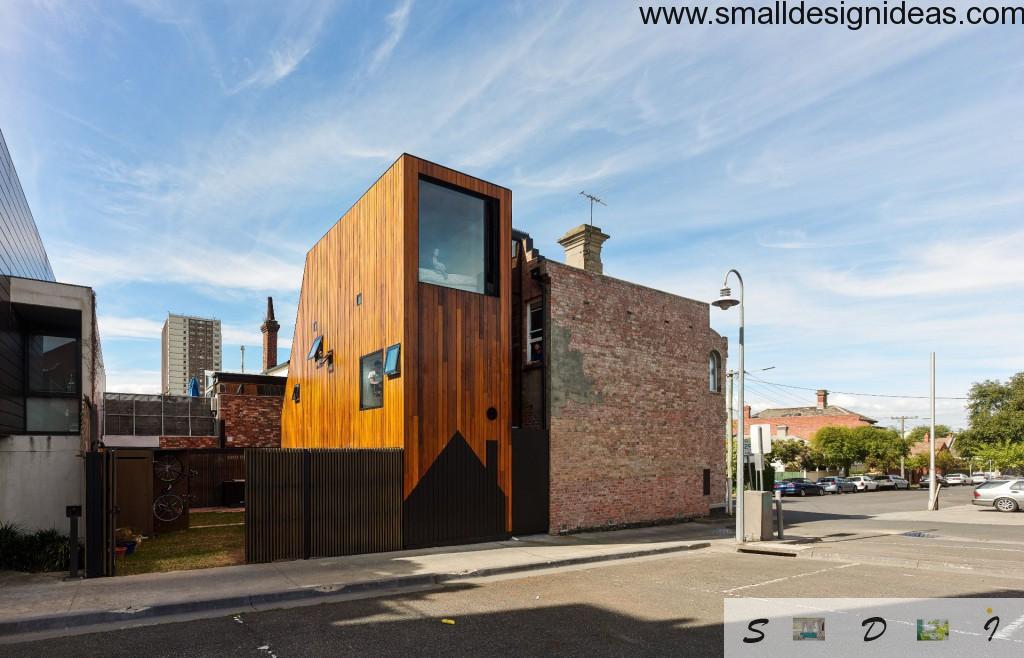 As a rule, the house in minimalist style is simple in terms of geometry and facade. Clear forms, simplicity and brevity – here is the basic concept of modern buildings. 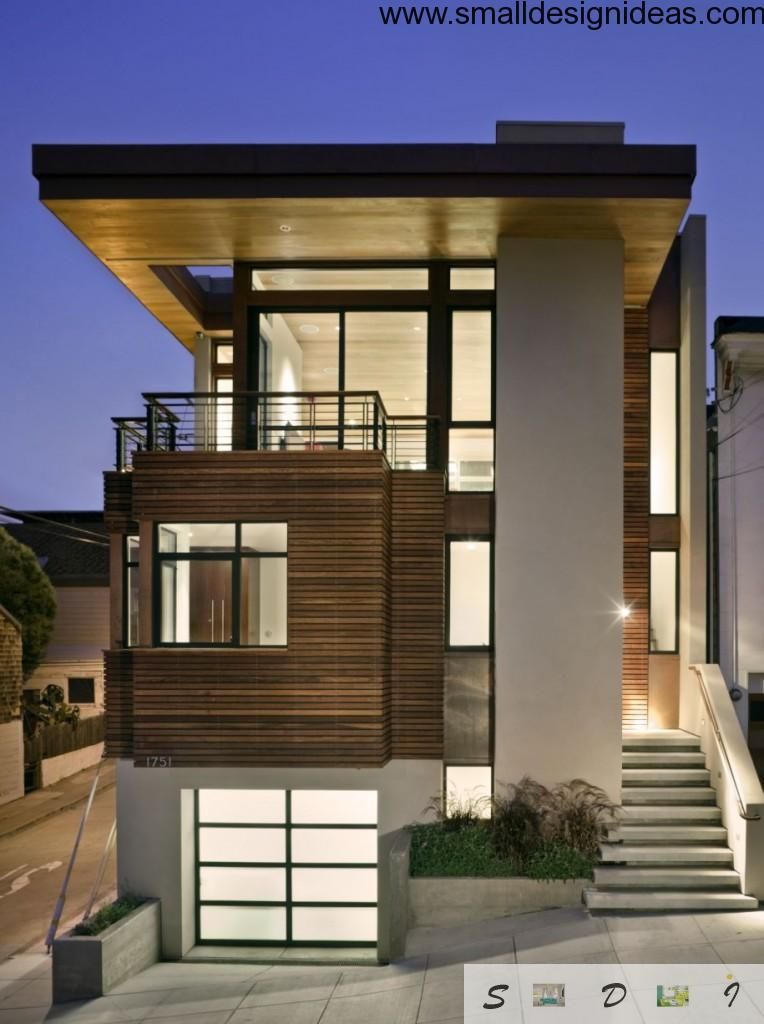 Even the use of natural materials or synthetic analogues for decoration of private houses in the case of minimalist design does not allow us doubt the general style of home ownership for any moment. 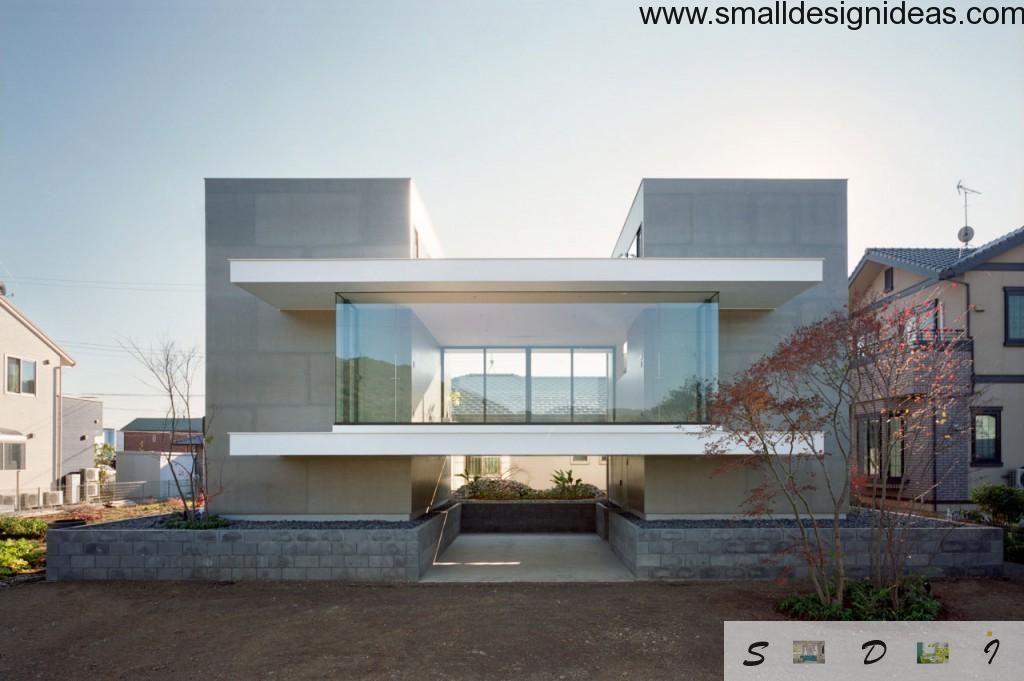 At first glance it is difficult to determine whether it is residential or industrial building, often only the size and landscaping of private courtyard indicate the presence of homeowners. 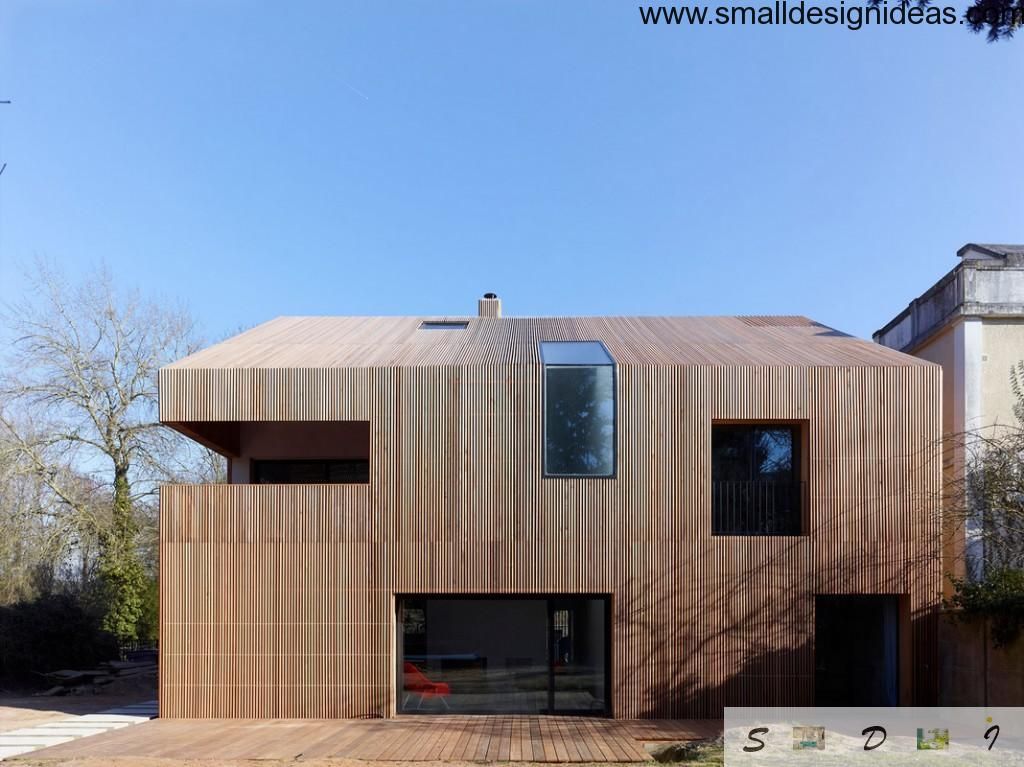 Often a house in minimalist style has large windows, panoramic ensembles. The space, or rather its abundance, is the main criterion of minimalism not only in the exterior, but also in internal arrangement of such houses. Nothing superfluous and complete freedom. 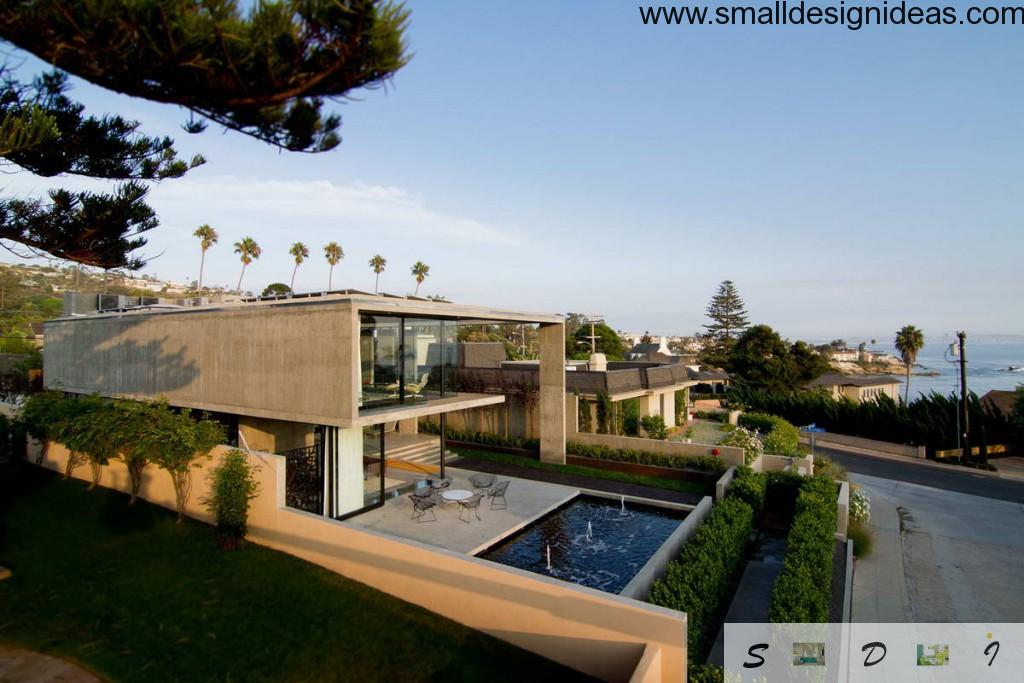 For this particular house of strict geometric shape quite informal variant of finishing was chosen. Upper floor as if enwrapped with snow-white lace. A striking example of the fact that minimalism does not have to be boring. 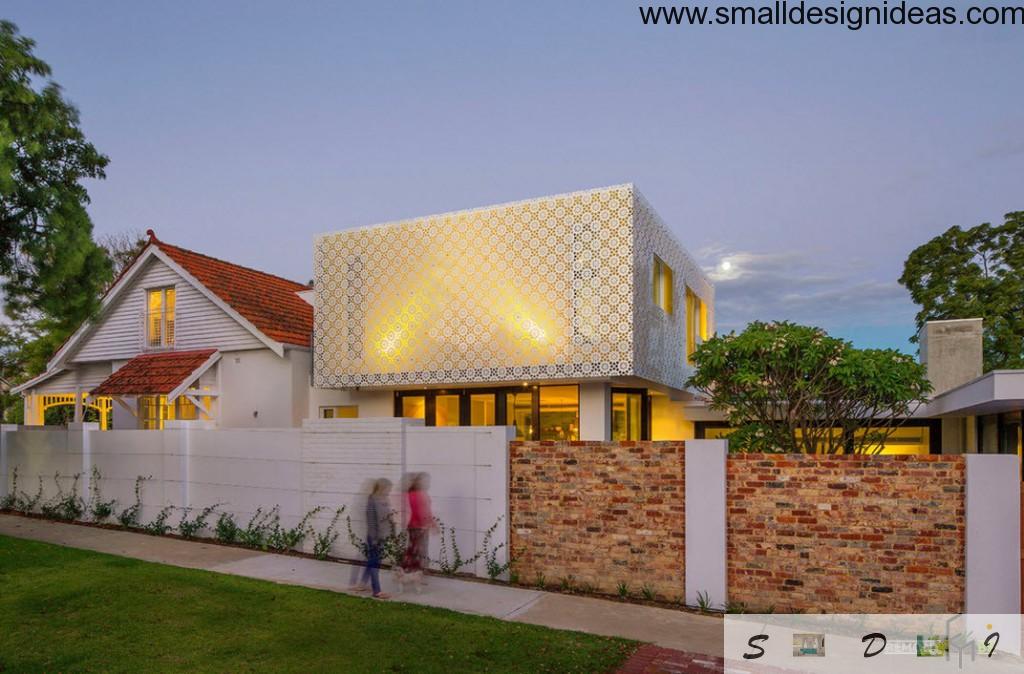 During creation of a house in minimalist style it is often bright colors in use. This is due to the fact that large areas of uniform surfaces of modern buildings would have looked hard enough in a dark palette of colors. 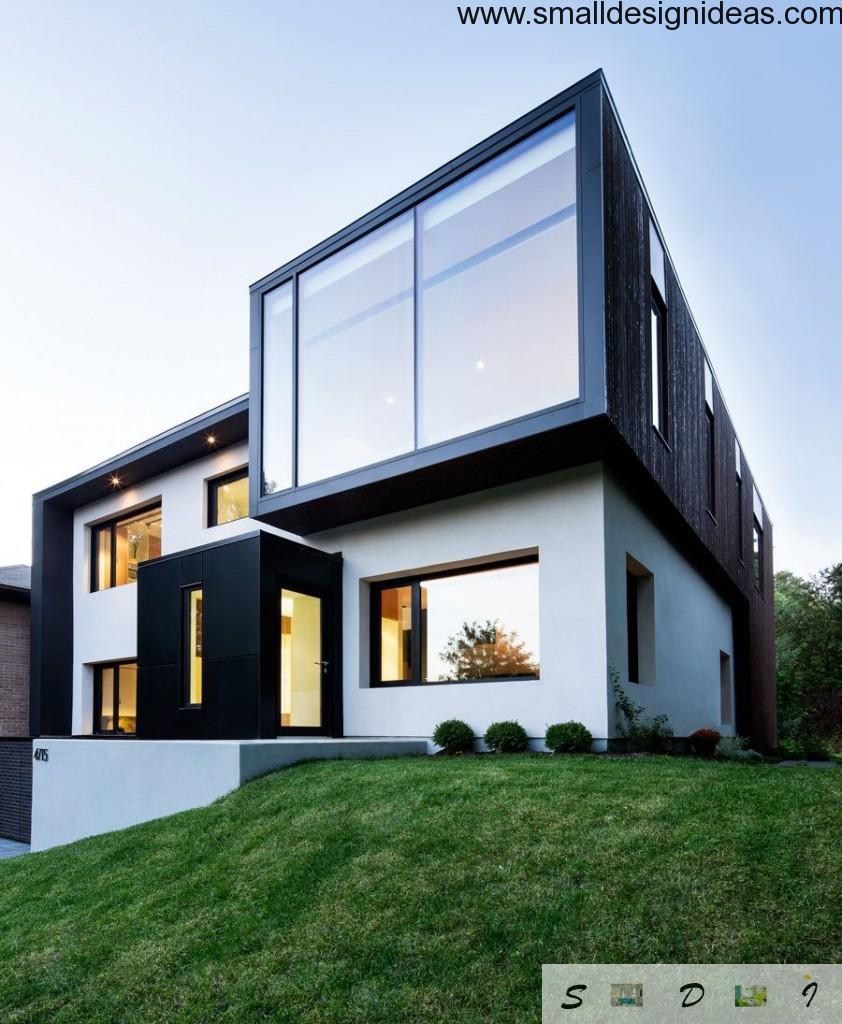 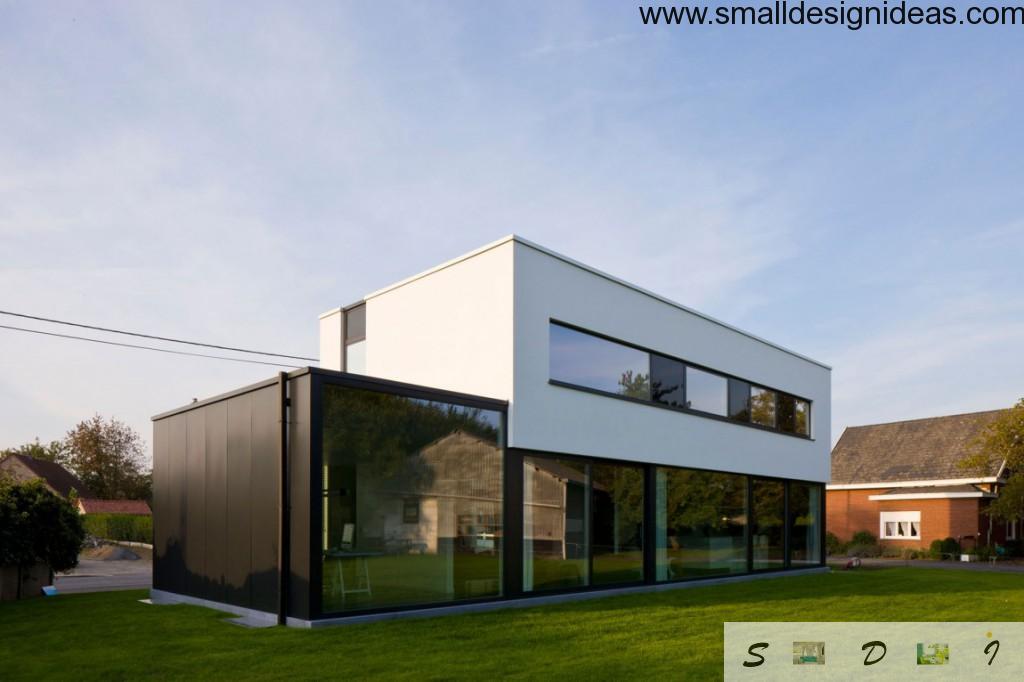 And this house is saturated with bright colors and has an incredibly festive look and unusual solution of geometric forms. 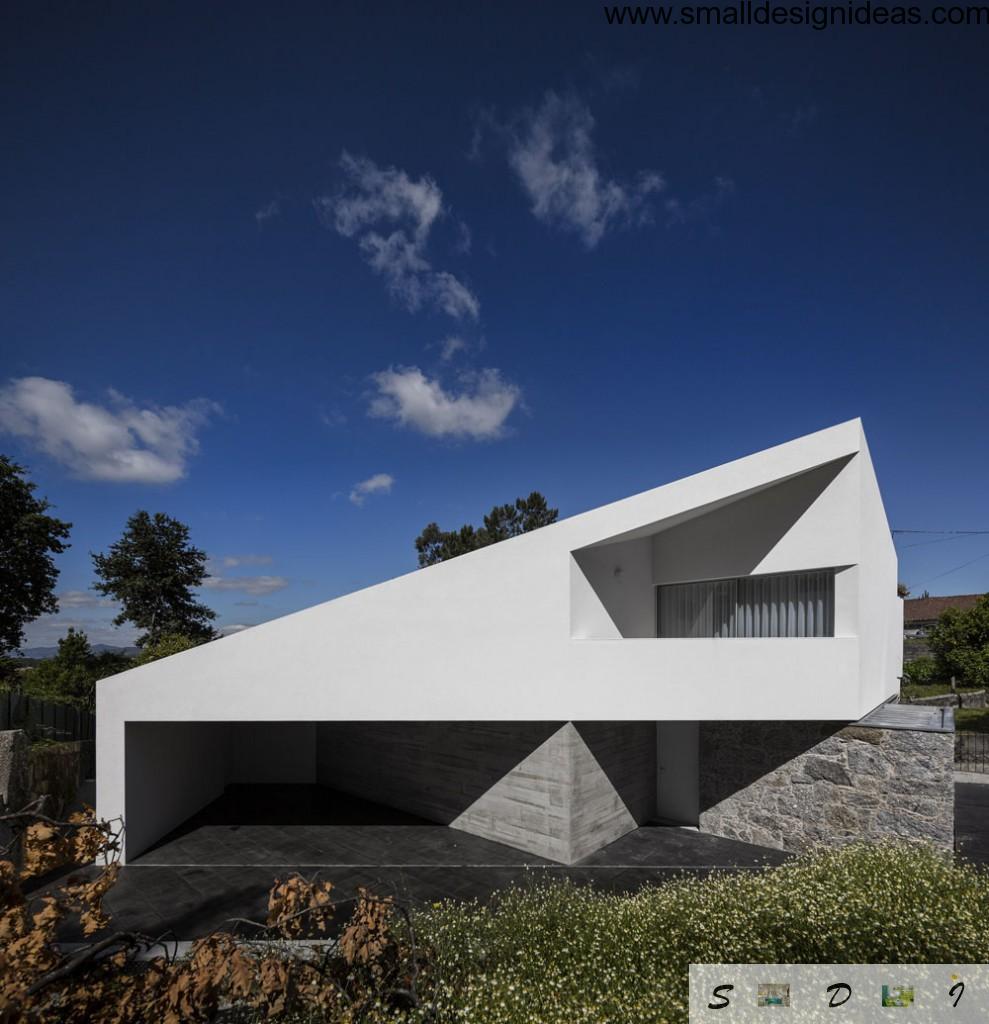 Houses of more modest size often full of contrasts in terms of choice of the color spectrum. Application of the rack method of the vertical surfaces finishing are also often found in modern private buildings. 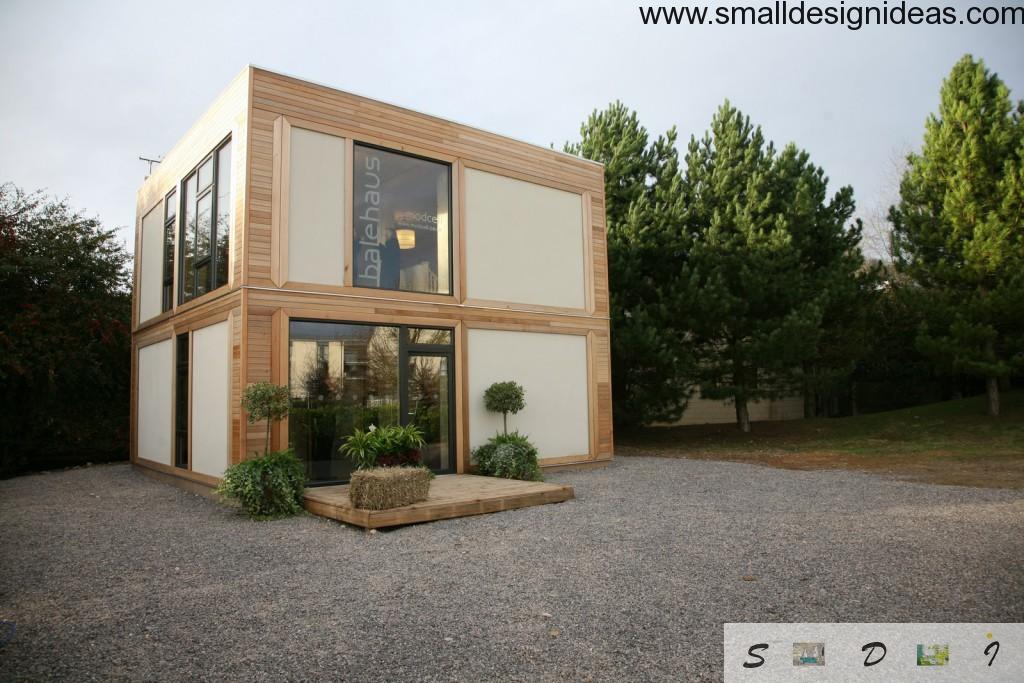 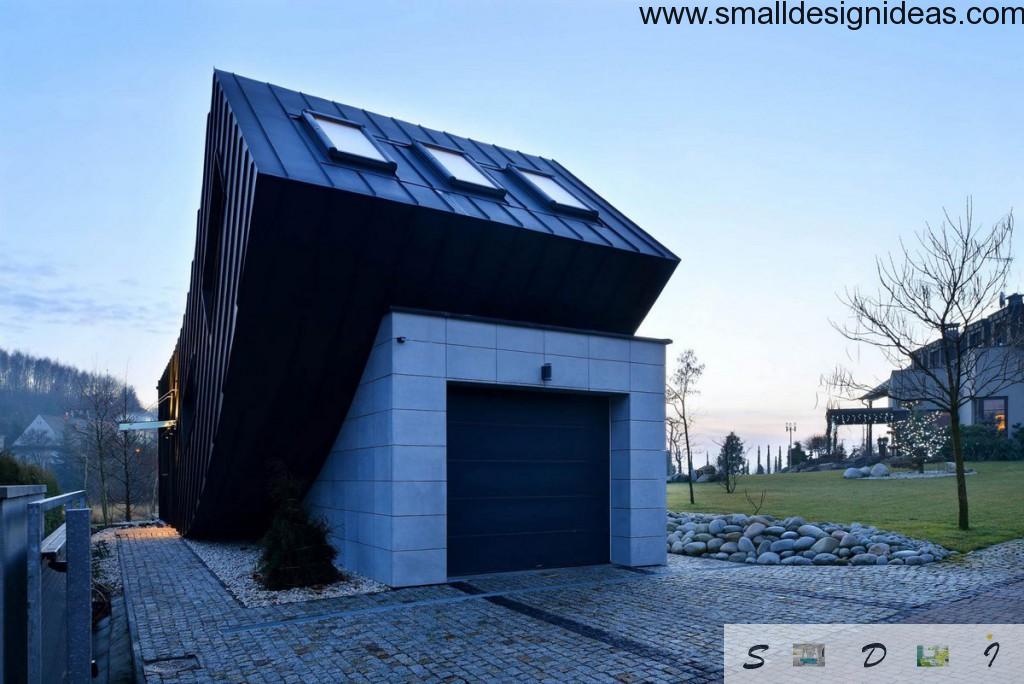 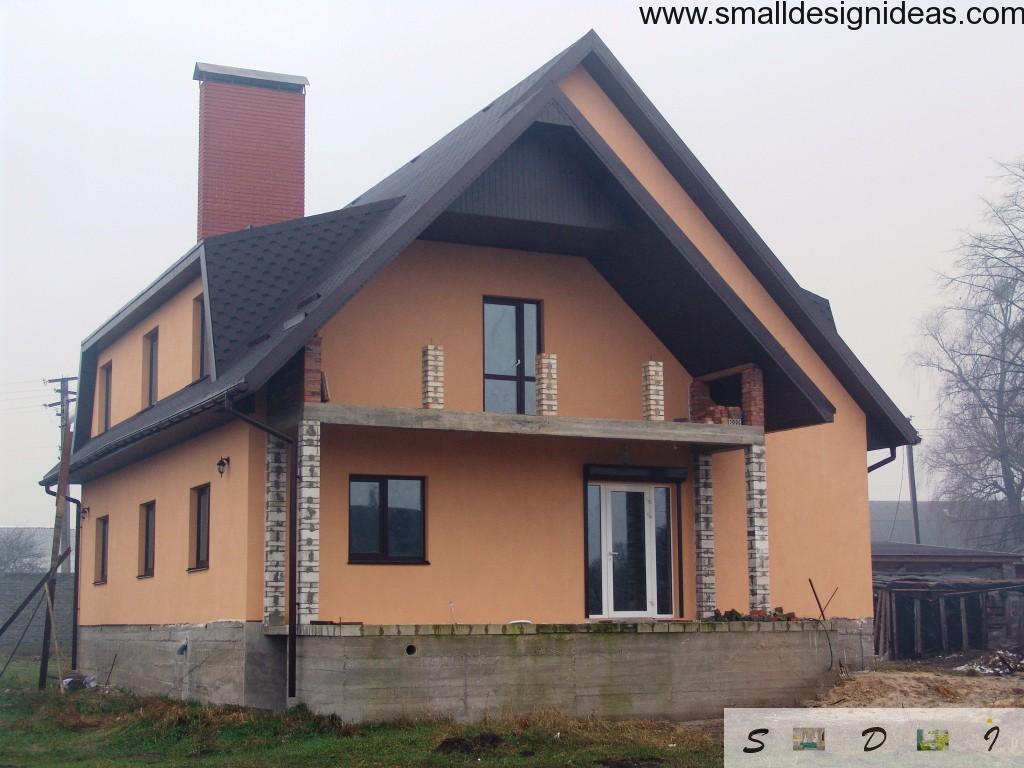 We hope that the collection of modern variants of the facades of private houses inspired you to experiment and achievements in this field.

What To Look For If You Want To Buy Green

Unless you’re living off the grid somewhere in a private haven, there’s almost no way to go entirely green. Even if you’ve transitioned your…